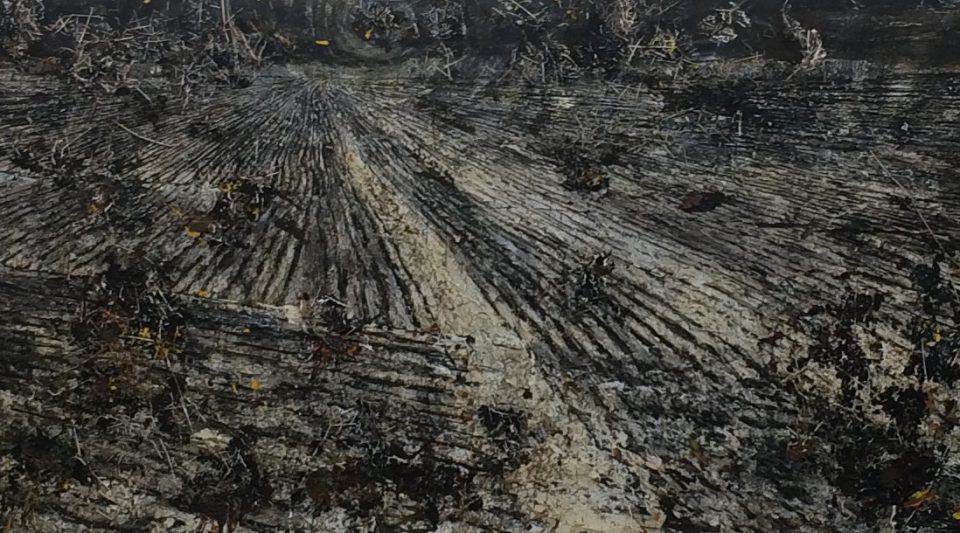 Anselm Kiefer’s latest solo exhibition Superstrings, Runes, The Norns, Gordian Knot at the White Cube in Bermondsey is both apocalyptic and redemptive.

Its title plays on various myths and allegories that have preoccupied Kiefer for the bulk of his 50-year career, and that he now ties together with his latest obsession – string theory.

The exhibition opens with a long, nave-like corridor punctuated by 30 floor-to-ceiling vitrines filled with coiled twine and straw. Each knot is mounted onto a series of melted leaden backdrops – a material Kiefer has been infatuated with since repairing broken lead pipes in his first house in Dusseldorf – that gild the corridor with an earthy grandeur.

Every one of these 4m-high glass boxes is adorned with a flurry of hand-scribbled equations – by Albert Einstein, Gabriele Veneziano, Edward Witten and several other of the German artist’s scientific heroes. Leaves are pasted with gold leaf, calculations for Light Cones are etched above pine cones. Kiefer is playing with material – showing us the complexity of the earth’s natural substance. In the darkness of the corridor, these vast glass boxes feel something like jars in a mausoleum, preserving the inner workings of the universe – a Hunterian for the cosmos.

The hallway juts off into several brighter rooms, each filled with gargantuan canvases. These paintings are more haunting than the vitrines. Vast landscapes of charred grey recede into bleakness. From afar, they look like abstract splatters of paint, but up close we see they are made of layers of the same earth-stuff – broken branches, burrs and thick mud. The tilted planes leak a wondrous kind of uneasiness.

We see remnants of human life – ancient runes, footprints of Norse Norns, decrepit amphitheatres – that suggest moments of abandonment. In several of these new paintings, titled Der Gordische Knoten, Alexander the Great’s battle axe is suspended mid-air, as if just-flung. The myth of the Gordian Knot is a boyish fixation of Kiefer’s. So the legend goes, Alexander took his battle axe to the intractable tangles of human existence, and with a single swipe “unraveled” the Gordian Knot. But the man is not present in any of these vast images, and the knots are still untied.

Are these moments of human absence a comment on current politics or the climate crisis? Kiefer is adamant that his works take place in no particular place or time. “There is no separation between nothingness and something,” he says. “All time, life, existence – everything is interconnected.” He quotes Paul Dirac – “You pick a flower on earth and you move the farthest star.” In his early career Kiefer, born in Germany in 1945, drew on images of war and history. Here, however, his scope is wider. Kiefer is delving into the memory of mankind as a whole, and considering his interconnectedness with the very fibre of the universe.

This is where we come to string theory – the monolith of Kiefer’s new show. Though he admits that he doesn’t quite understand what string theory is, Kiefer professes complete fascination with the idea that there is a scientific equivalent to the allegorical Gordian Knot – an idea that he picked up after thirty years of subscribing to Spektrum, a German monthly science magazine. String theory seeks to explain the quantum mechanics of space-time. Whilst Kiefer toys with the vocabulary of this physics in the knotted strings of the corridor, his monumental 4x4m paintings in the final room of the White Cube attempt to visualise these forces.

Eruptions of thick, black energy burst from the centre of canvases like black holes. In Quantized Gravity, a careful lattice is ruptured by a looming mass of wild, frenetic tension. Splodges of orange tease us with bloodshed – but this is a battlefield of a more fundamental nature; the gears of the universe grinding and rusting. Rows of ashen straw swirl like ammonite. Burnt books and branches are left dangling from the gallery walls. These are moments of interruption – the language of the cosmos jutting out onto our human plane.

String theory cannot be verified empirically. Rather, it is an attempt to provide an all-encompassing description of the universe. And that, says Kiefer, is just why it is beautiful. “I suppose it’s like painting,” he says. “You cannot prove if a painting is good or bad. That is the point of it – it is descriptive… and there’s something sublime in that.” This triumph of a collection stands as the 74-year-old’s description of the universe, in its all its destructive, glorious chaos. Superstrings is a sublime ode to the flesh of the cosmos. But Kiefer is wrong. You can prove a painting is good. And this exhibition is a masterpiece.