One of the biggest issues facing us cosseted west Londoners at this time of year is where to go for our family skiing holiday. Given the lack of parliamentary time to cover this imperative issue I’d like to throw an option into the debate – Lake Annecy.

The marketing department in France clearly thinks that naming a ski area after a well-known lake/beautiful medieval town is a winner, although the reaction from friends on telling them of my destination would imply there’s still some work to do. In fact Lake Annecy encompasses the better-known villages of Le Grand Bornand and La Clusaz, a beautiful region with some killer – and, crucially, family-friendly – slopes.

Combining the things you love – family and mountains – should be a no-brainer. As the romantic poet William Blake would have it, “Great things are done when men and mountains meet”. I had pictured a perfect, brisk, sunny day, skiing some greens, blues and reds – a picnic on sunny slopes, and perhaps a cheeky beer. But if dad picks the wrong route or a dodgy traverse, the transformation from familial bliss to open rebellion is often quicker than flipping a crepe.

With Flora, Celia and Tabitha skiing at intermediate level, I am always on a knife-edge between ecstasy and rebellion. One minute the six year old is whooping with delight skiing ever faster, legs wobbling like wet spaghetti, finding jumps, launching herself literally inches into the air – kids’ skiing at its best.

Ten minutes later, rebellion hit as we encountered an unexpected section of ice. “Dad, I’m not moving”, “Tabitha you skied this yesterday”, “I hate skiing, why did you bring me here?” Teachers, you have my sympathy.

Being a family resort Le Grand Bornand has blue runs that are genuinely blue with no dodgy “red” sections. In turn, the reds won’t throw in a brutal black section. And whilst there are always faster skiers about, Le Grand Bornand doesn’t attract the crowds of elites who can be off-putting to those us out for a pootle. They are more likely to be found at La Clusaz, which has more options for better skiers and some excellent off-piste areas. 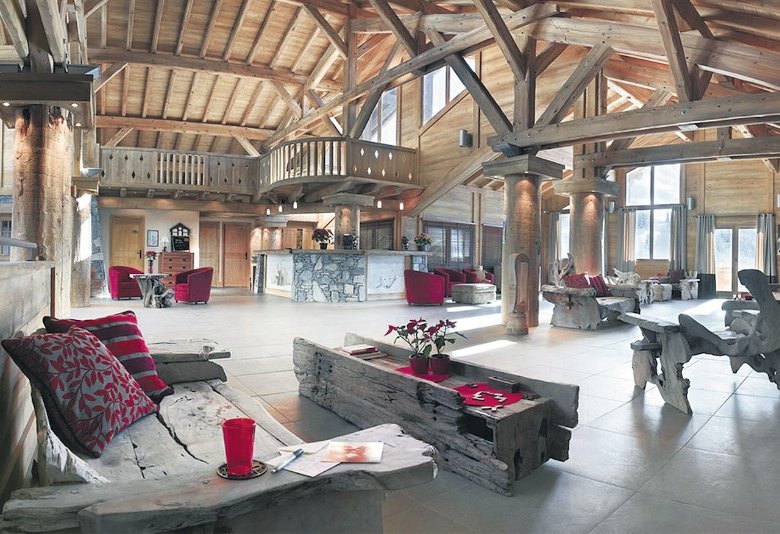 When looking for pleasant places to ski, my advice is to consider how good they are as summer resorts. Places that have a high level of tourist trade in the summer tend to be “real” places and lower in altitude. Unusually for a ski area, 40 per cent of the tourist revenue comes in July and August. Both Le Grand Bornand and La Clusaz feature heavily in the Tour de France and have lovely cafes, and there’s been a church in Le Grand Bornand since the 1300s (the current incarnation was built in the 1800s). The risk, of course, is that lower resorts have less decent snow coverage, and last season wasn’t great, but nevertheless there was just about enough to ski on.

“Dad, I’m not moving”, “Tabitha you skied this yesterday”, “I hate skiing, why did you bring me here?”

Skiing ain’t cheap, but going to a resort that is “Championship” level rather than “Premier League” is one way to reduce the cost. The skiing area for Le Grand Borand/La Clusaz combined has approximately 220km of runs. By comparison the Three Valleys has 600km. To an extent, you get what you pay for, but if you don’t think the family needs all 600kms, perhaps you will value the lift pass being commensurately less expensive. A six-day pass in early April 2017 costs €142 versus €294 for the same week in the Three Valleys.

We in the hyper efficient MGM complex of Le Village de Lessy in Chinaillon, Le Grand Bornand, which comprises a series of 4 star, self-catered apartments that can be booked through Peak Retreats. With spa, swimming pool, provision of towels and linen, plus various other optional services, these apartments are somewhere between hotels and traditional self-catering chalets, and represent good value. My only criticism is the labyrinthine lifts and passageways linking the bottom of the complex to the top – I found it easier to drive to the boulangerie each morning.

For couloir lovers and speed junkies, Lake Annecy is probably not the place. But for families, it scores on a lot of fronts, perhaps most importantly boasting the best fondue I’ve ever tasted, courtesy of Hotel L’Alpage. Mind you, as Le Grand Bornand is the home of Reblochon cheese you wouldn’t expect anything less.

Price based on five sharing including Eurotunnel crossing (peakretreats.co.uk / 0844 576 0170)