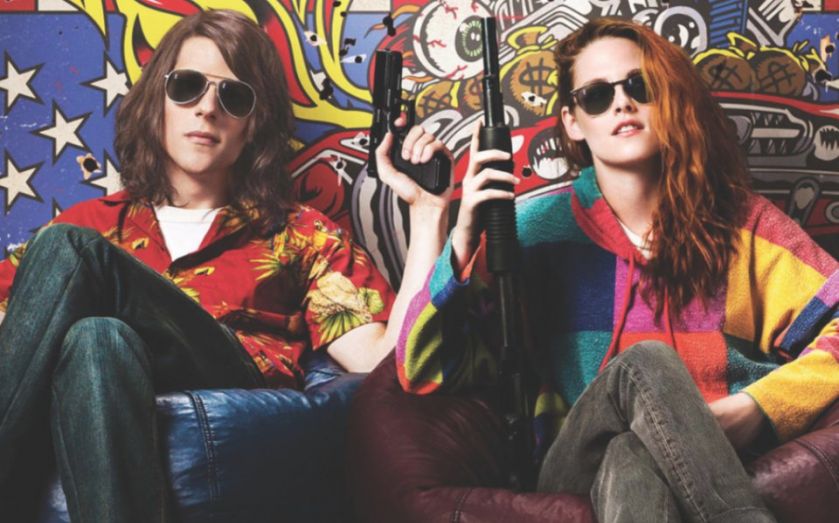 Soon to appear in Batman v Superman, a film in which he’ll have no hair at all, here’s Jesse Eisenberg starring in a film in which he has lots of hair. And let me tell you, it’s lovely hair. Long and shiny. The kind you want to run your fingers through. The kind you’ll idly think about as you brush your teeth before bed tonight. “Why am I thinking about Jesse Eisenberg’s hair?” you’ll wonder, before thinking about the hair some more. It truly is magnificent hair.

The hair, with Eisenberg underneath it, stars in this action comedy about that most popular of cinematic professions: amnesiac secret agent. American Ultra tells the story of Mike (Eisenberg), a hapless caricature of a weed smoker whose Truman Show-esque fear of county borders leaves him trapped in the grim, wet surroundings of his small town life and convenience store career. His unflinchingly patient girlfriend Phoebe (Kristen Stewart) lovingly endures his lack of ambition, responding to his string of stoner disappointments with a sweet affection that borders on inexplicable.

Unknown to Mike, of course, is that he’s actually a deprogrammed CIA sleeper agent armed with a latent set of world-class murderising skills buried deep within his drug-addled psyche. It’s the familiar template of the memory-wiped superspy, one that’s been lifted wholesale from Bourne, Total Recall, and that one James Bond film where he gets hit over the head with a frying pan and spends the rest of the movie thinking he runs a B&B in Margate.

Once activated by his former handler Lasseter (Connie Britton), Mike goes from bong to Bond (which I’d wager was almost certainly floated as the film’s potential tagline), and his agency skills surface on demand as he expertly and efficiently plunges spoon after knife after dustpan into the jugulars of CIA operatives sent to terminate him. Like Coppolla’s portentous oranges, the appearance of a dustpan generally precedes a gruesome death in American Ultra.

What comes next are the film’s best moments, in which Mike’s panicked incomprehension at his first kill is met by Phoebe’s attempt at pragmatic reassurance. His stunned reaction to his handler’s coded activation phrase (“is that a lyric from something?”), followed by his cowering behind a pole as Phoebe surveys the bodycount, marks the film’s departure from stoner slacker schtick and its arrival at a series of rapidly escalating, yet quickly tiresome, action sequences.

It’s to American Ultra’s detriment that the scope of its superhero action stays so small town, and a sparse supporting cast leaves its tiny world feeling ghostly empty. Mike’s few fighting encounters with the CIA’s team of reactivated sleeper agents, commanded by opportunistic weasel-man Yates (Topher Grace), are gore-heavy, uninventive and built around some half thought-out set-pieces (one, involving a fight scene in a gym illuminated by a UV light, is disrupted by Kristen Stewart’s blindingly reflective teeth, which draw attention away from Eisenberg caving in skulls with free weights).

American Ultra is at its best when Eisenberg plays the unassuming slacker, muttering in charmed disbelief at his own murderous hands. It’s less gripping when he’s battering folks to death with the glib impunity of a trained and confident super assassin.