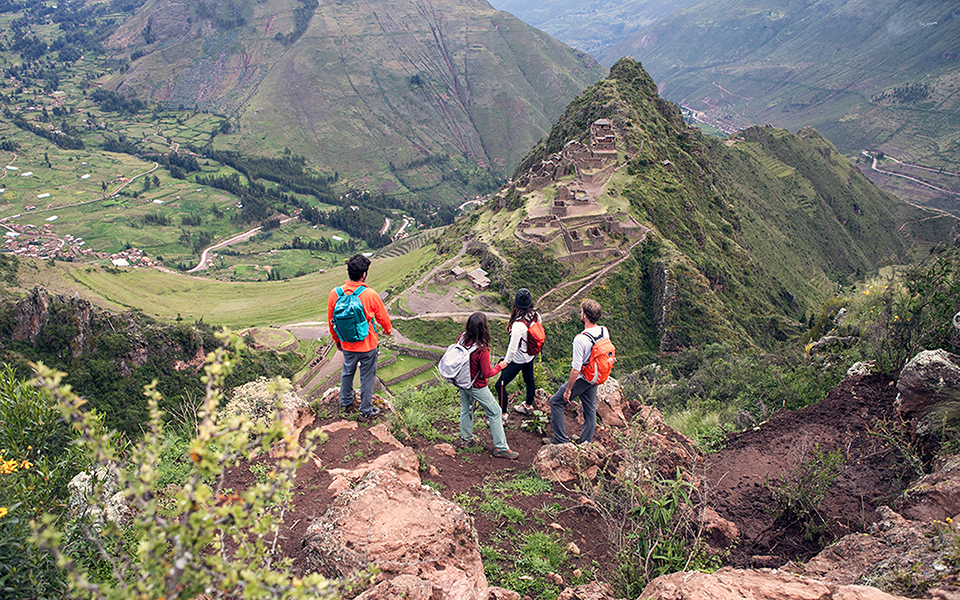 When most people think of Peru, it’s the ancient citadel Machu Picchu that comes to mind. And when you mention the Sacred Valley, it’ll likely conjure up similar images of hiking through misty mountains to equally mystical Incan ruins. This is, in fact, exactly what I’m doing. But I’m not only here for the archaeology; I’m here to uncover the stories behind this region’s cuisine. The first step is a hike to the archaeological site, Moray.

The travel company Explora, who’s leading the expedition I’m on, takes an off-the-beaten-track approach to exploring the land. With this in mind, the Sacred Valley lodge’s guides approach Moray from a different angle, ensuring you’re the only ones on the trail with an exclusive view of the archaeological site when you arrive. We start the hike from the small farming community Misminay, passing fields of barley, fava beans and potatoes before arriving to a viewpoint overlooking the Moray plateau.

The Sacred Valley, which stretches along the Urubamba River from Cusco to Machu Picchu, took its name from the fertility of land and flow of the sacred river Incas believed was a reflection of the Milky Way. Owing to the fact such a diversity of produce could be cultivated here, the valley became the centre of agriculture in the Inca Empire. It was chosen for the Incas’ most significant constructions and complex irrigation systems that are still used to this day.

Located at around 3,380 metres above sea level, Moray is among the Incan ruins still here to tell this story. This archaeological site is believed to have been an agricultural laboratory for experimenting with crops at different microclimates, according to where they grew on the circular stone terraces.

This site is just one example of the Incan legacy. Not only did the Incas leave behind their beliefs and archaeology, the civilisation also defined what people eat here to this day.

More than 4,000 types of potatoes now grow in Peru, along with around 55 varieties of corn and a multitude of unrecognisable vegetables and culturally significant wild herbs. Now, researchers are working with local communities to retain this culinary history while Peruvian chef Virgilio Martinez champions the diversity of native produce and work these farmers do. His recently opened restaurant Mil highlights this unique cuisine in a dining space looking out over the site we’ve come to see.

In a nearby patch of land in the Andean highlands, meanwhile, the potato farmer Manuel Choqque, is preparing for our arrival. Along with Virgilio Martinez, he is hosting a demonstration of his 15-year potato-harvesting project and a lunch showcasing the local produce cooked in the traditional Incan way, over fire or baked in the earth of the windswept plateau.

Choqque has been working to recover a miscellany of heritage potatoes for the past 15 years. He now cultivates more than 350 native varieties, which come in a multitude of shapes, imbued with cultural significance and saturated with inky red, yellow and purple pigments. One is shaped like a puma’s paw, another represents a snake and one looks like the Incan star; together they illustrate the way Incas saw them as a manifestation of their gods.

For Martinez the journey here began in 2013 when he established the Mater Iniciativa with the team of researchers who are now seeking out unknown ingredients from across Peru. He then began to showcase this native produce in the creative menus of his Lima restaurant Central — which is currently no.6 in the World’s 50 Best Restaurants list — highlighting the range of ecosystems and elevations across the nation. Martinez has worked closely with Choqque since embarking on this venture and now Explora is coming on board to connect more people with the land.

Martinez has now curated all of Explora Sacred Valley’s menus, from fine dining through to picnic lunches offered out on excursions, and together the chef and Explora are developing excursions focusing on the region’s gastronomy. These explorations will allow you to forage for local ingredients while also engaging with the people growing and tending the crops. Martinez will be at the lodge several times a year to host these immersive experiences himself.

The night before coming to meet Choqque I’d been given a preview of the lodge’s new culinary concept in its high-ceilinged, wooden-beamed restaurant. The meal begins with dishes of cured trout, avocado and potatoes from Huatata and duck ceviche with black quinoa and tarwi, before continuing on to a chapla (regional bread) of purple and piscorontu corn with rib steak and the Peruvian huacatay herb sauce. This is followed by a dish of Lima beans and ‘mushrooms of extreme heights’ with cushuro algae, and the heartiest dish of the night, a tender cut of pork neck with honey and chillies served with purple potato textures and petal strewn tubers and roots.

The meal comes to a close with fruits from the surrounding land with huacatay ice, and the Cacao Quillabamba, an indulgent combination of chocolate textures from the cacao-producing town it takes its name from. Each course Virgilio has created comes plated on artisanal Peruvian ceramics and the meal is paired with wines from vineyards such as Doña Ana and Viña Casa Marin in Peru and Chile.

Ultimately, this partnership highlights the parallels drawn between the diversity of produce and fertility of the land and the area’s rich heritage and Incan informed identity. And this is being eloquently expressed through the producers and products this new partnership pays homage to. Martinez brings his culinary expertise and passion for Peruvian produce, while Explora continues to extend its philosophy of providing in-depth exploration of the remote land.

Visit latinroutes.co.uk for the latest info