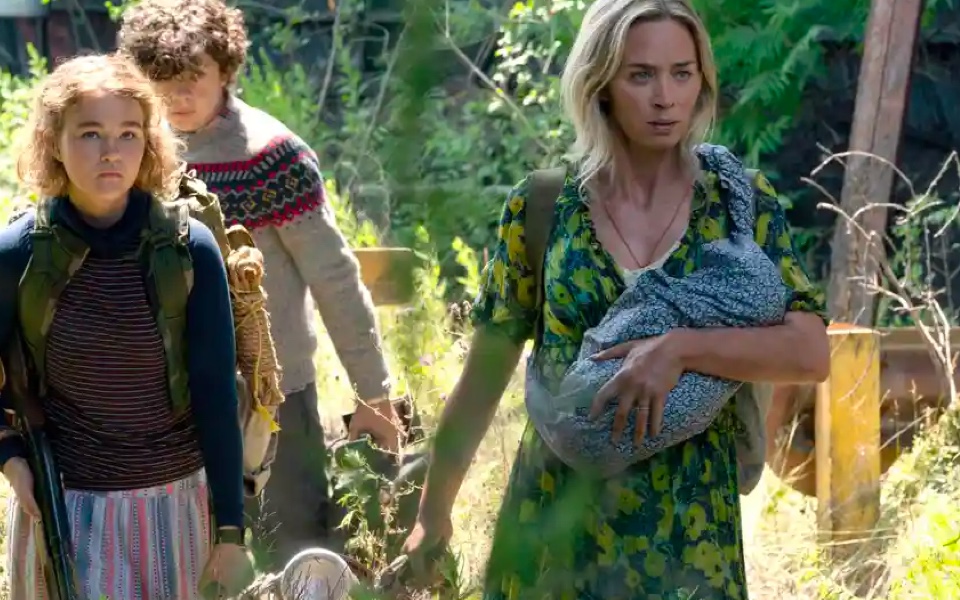 Along with Peter Rabbit 2 and No Time To Die, A Quiet Place II was one of the movies that signalled cinemas would be uniquely impacted by the events of the last year. We’re still waiting on Bond, but Peter Rabbit 2 arrived recently to a rapturous reception from audiences (slightly less so from critics). Now, the sequel to John Krasinski’s inventive horror finally arrives. But is it worth the anticipation? Spoilers from the first film ahead…

We pick up after the events of the first film, which saw the Abbott family patriarch Lee (Krasinski) sacrifice himself to save his family. Now, mother Evelyn (Emily Blunt) and her three children Regan (Millicent Simmonds), Marcus (Noah Jupe), and their new-born brother. With their base destroyed, but armed with a new weapon against their alien predators, the family move through a ravaged landscape hoping to find survivors. With the help of a friend from the past (Cillian Murphy), they quickly discover that the blind creatures that hunted them are not the only threats in the outside world.

Writer-director Krasinski’s formula for the first film relied on the key principle of horror put forward by Alfred Hitchcock: “There is no terror in the bang, only in the anticipation of it”. In this sequel, that principle holds firm as the silence, and the violent breaks in it, become a sensory nightmare. It does, however, have the difficult task that most sequels face, having to expand the world without losing its appeal.

Krasinski mostly succeeds in this sense. The world is bigger, with a spectacular prelude being the showpiece of a number of call backs. This sequence breaks our hearts, showing our hardened apocalypse survivors as normal people enjoying their lives at a children’s baseball game just before a craft in the distance crashes. It also introduces Cillian Murphy’s Emmett, someone the family knew, now a shaken, battle weary survivor living in a bunker. Murphy’s deep, haunted stare is perfect for this, making a defeated contrast to the fiery survivalism of Blunt.

The plot splits into two with Emmett and Regan becoming an unlikely duo pursuing a potential colony “Beyond The Sea”, while Evelyn and Marcus defend Emmett’s bunker from some noise-pursuing horror. Simmonds is as captivating here as she was before, working well with Murphy as they seek to find a way to eradicate the aliens. Blunt’s role is slightly smaller here, but her hardened performance makes you believe she could lead a family through the end of the world.

It’s at this plot split that the film faces its own deadly choice: explore this bigger world and lose the straightforwardness that the franchise is built on; or keep things simple and leave this brave new world feeling a bit underdeveloped? It chooses the latter, with most of the humans they meet feeling more like obstacles to a goal than something that adds texture. Krasinski sticks with what brought him to the dance, which will delight or disappoint depending on what you think a sequel should be.

What’s not up for debate is the edge-of-your-seat tension. Your nerves continue to be shredded as anything and anyone could trigger a violent onslaught. The set pieces are very strong, suggesting that the talent behind the camera could be destined for a big blockbuster at some point (Krasinski and Blunt remain fan favourites for a Fantastic 4 remake). Even if many of the new additions feel slight, strong casting choices like Djimon Hounsou and Scoot McNairy do their best to bring something to their brief roles.

A Quiet Place Part II, like all sequels, battles to convince you that it was made for a reason other than the first one making a lot of money. It mostly succeeds, bringing the thrills and tension expected with the name, even if some depth is sacrificed.

A Quiet Place Part II is in cinemas now.