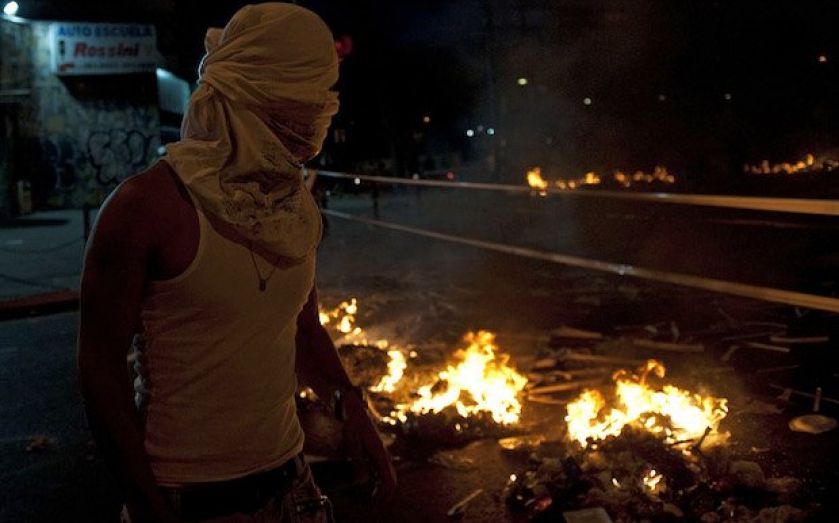 Panic and fear are gripping the people of Venezuela. Although anti-government protests have pretty much become a fixture in the South American country since President Nicolas Maduro came to power, they’ve picked up apace over the last few weeks.

In the past eight days, clashes between protesters and security forces have seen six fatalities and numerous injuries and arrests.

Mostly students, the protesters are calling for Maduro to resign, blaming his government for the country's high inflation, shortage of goods, violent crime and alleged repression of dissenters.

Maduro was narrowly elected in April of last year, succeeding the late Hugo Chavez. His ties to "Chavismo" – the unique brand of socialist Chavez touted – go back to the early 1990s.

Government’s kept hold of the reigns in Venezuela by creating a brand of populist empathy, heading it with the ebullient Chavez and having the good fortune of being able to provide an economic boon for the country with booming oil prices.

Of course, Chavez has gone, and so have the booming oil prices.

Since coming to power, Maduro has attempted to combat the surging inflation – what he called an "economic war" – corruption, weak security and crime, by imposing price controls, deployed the military and proposed stringent legislation.

While many Venezuelans initially welcomed the moves, protracted economic troubles have prompted renewed outcry from the country’s middle classes.

Now is a crunch point, as government fiats, clientelism and brutishness rear their ugly heads.

The President has said that opposition leader Leopold Lopez, a 42-year old Harvard-educated economist and former mayor, and "small fascist groups" are looking for a coup and are in cahoots with the US government.

The US has denied any involvement.

According to the Caracas Chronicle, state-sponsored paramilitaries are roving middle class neighbourhoods, shooting at people and storming buildings.

The pro-opposition blog says those protesting or, even who look like they could be protesting, are being arrested and shot at.

Today, news came that Lopez faces 10 years in prison for his organisation of the rally that led to the last week of violence. Charges against him include arson and criminal incitement.

He was arrested in Caracas on Tuesday, leading to hundreds of thousands of people wearing white filling the main streets, blocking the vehicle he was in.

Violence in Caracas intensified, with teargas, bullets and Molotov cocktails being used, and it was the same story as protestors awaited Thursday’s court ruling.

In San Cristobal, the state capital of Tachira, businesses are shut, people are too frightened to leave their homes and police are being met by barricaded streets.

The government has said it’s taking "special measures" to restore order in the town.

On Tuesday, Genesis Carmona, a 22-year old tourism student and local beauty queen, was shot dead in Valencia during a protest.

Why social media’s so important

A huge number of Venezuelans have taken to social media for information on protests. This is partly because it’s the fastest way to get to information, but also because many don’t trust TV and radio stations, the majority of which are run by government.

People – and particularly younger individuals who make up the core of those protesting – can make political comment and share information in order to organise protests.

And more than that, they can show the rest of the world what’s going on.

Ten hours ago, Lilian Tintori, the wife of Lopez, tweeted to his supporters. She implored them to carry on protesting, as she confirmed her husband will remain in jail.