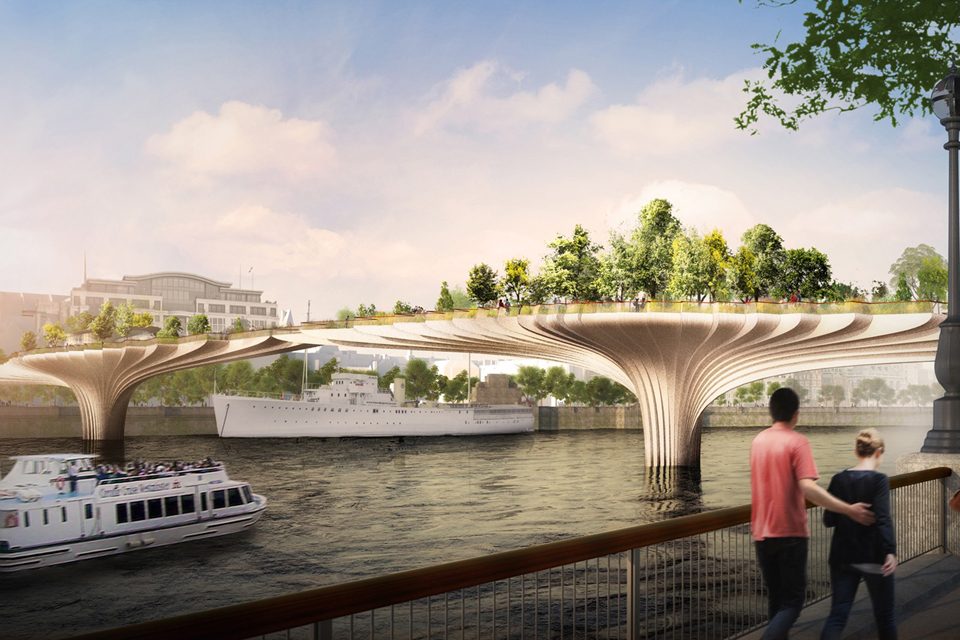 At least, that’s what the Prime Minister said when he was asked about the High Speed Two rail project on the campaign trail earlier this month. And it is just as well. Because some of London’s biggest infrastructure problems are creaking at the seams. If the PM were not so keen on building things, managers might be getting twitchy.

In fact, 2019 has been a blockbuster year for things going wrong on some of the capital’s most high-profile – and high-risk – projects. Crossrail, Battersea Power Station and HS2 have all faced soaring costs and mounting delays. Meanwhile, the failed Garden Bridge, once beloved by Boris, has been the subject of even more derision than in previous years.

As 2019 draws to a close, City A.M. takes a look back at some of the key moments in the lives of London’s troubled schemes.

Garden Bridge was meant to have the utopian charm befitting a city still in a state of euphoria after London’s 2012 Olympic triumph.

The brainchild of Absolutely Fabulous star Joanna Lumley, it was envisaged as a traffic-free link across the Thames brimming with with trees and flowerbeds, offering  views of the City from the South Bank.

Most importantly, it was then-London mayor Boris Johnson’s baby and not (repeat NOT) a vanity project.

But this is 2019. Times have darkened. There is no bridge. Eventually, it became clear the organisers were unable to raise the necessary funds to carry on.

In its place is a £43m black hole in public coffers – part of the eye-watering £53m final cost of the failed project, revealed earlier this year.

The Garden Bridge Trust, which managed the project since November 2015, has subsequently been accused of “squandering public money” on the ill-fated venture, and minutes from a meeting of the group reveal one trustee said it was “reckless” and “premature” to award the contracts as “there were still 22 hurdles to overcome … [and] that these were significant hurdles that could potentially delay the programme”.

To boot, a recent report from the London Assembly sheds light on the bad spending choices that allowed the bridge to get as far along the road as it did, including the decision to award £21.3m of construction contracts before planning permission had been granted, £400,000 on a gala dinner and £160,000 on its website.

Moreover, TfL was ordered to pay more than £5m to the Trust to pay back disgruntled donors including Bloomberg, Glencore and Royal Mail. One donor paid £3,200 at auction for the privilege of playing table tennis with Boris Johnson. They got their money back.

As for the taxpayer? Absolutely not.

In an alternate universe, Londoners are getting the Tube directly from Woolwich to Heathrow Terminal five in less than an hour.

That is how long it will take on the Elizabeth Line, according to Crossrail’s journey planner tool – handily placed on the chronically delayed infrastructure project’s website. Snap back to reality, however, and that tool – though very much real – is incongruous.

After years of hitches, budget overruns and managerial changes, Crossrail remains nothing more than an abstract concept below the pavement for most people – more than a decade after it was signed off.

The list of delays is staggering. First it was pushed back to autumn 2019; then, to December 2019; then again, to late 2020; and then once more, when Crossrail boss Mark Wild said there was no chance of it opening in 2020.

Now, the official message is that the line will open “as soon as practically possible” in 2021 – City A.M. encourages readers to believe it when they see it.

And as it turns out, time is money. Last month, it emerged costs had spiralled to as much as £18.3bn, £2.35bn over budget. Of course, the received wisdom surrounding Crossrail is that, despite it all, the project will more than pay for itself in the long-run, with the benefits to Londoners far outweighing the harm caused by the sky-high bills and jarring delays.

“The Jubilee Line extension suffered similar issues,” wrote commercial director of office firm Bizspace Emma Long in City A.M. last month. “Almost doubling in cost during the six years it took to complete, the project was at first deferred by a year, then another two months. Eventually the first phase opened in May 1999, with the entire line opening later that year,” she added.

“Though the project earned serious criticism at the time, where would we be without these stations now?”

Nevertheless, the expense has proved a growing headache for Khan, who has been accused of being too hands-off with the project. His response to that claim in May? “I don’t get to see the ducks’ legs. I get to see the ducks moving swiftly across the lake.”

But this is Europe’s biggest infrastructure project. Sooner or later, Khan may well have to look at the work going on beneath the surface.

Another conundrum for London authorities is an extension to the Northern Line to the landmark redevelopment at Battersea Power Station, which is running at least a year late. It was hoped the line would be ready next year. Now? September 2021 at the earliest.

And above ground, things are not looking much better. In March, it emerged the £9bn project, which will create 25,000 new jobs and 20,000 new homes, was so far behind its plans that hundreds of people who bought flats there will be allowed to reclaim their deposits and walk away.

Battersea Power Station is vast enough to envelop St Paul’s cathedral. London authorities will hope that, despite recent hiccups, it does not grow into an even bigger problem in the coming years.

HS2 seems to grow more expensive by the minute. The ambitious rail line will one day connect London to Birmingham, Manchester and Leeds. Or at least, that is what bosses hope.

A final decision is yet to be made. And last month, a leaked draft of the government-commissioned review into the project cast yet more doubt on how much it will actually contribute to the UK. HS2 was supposed to provide a cost benefit to the taxpayer of £2.30 for every £1, but that has now dropped as low as £1.30, according to review chairman Douglas Oakervee’s estimates.

Meanwhile, it is unlikely to be finished in its entirety before 2040. That was also revised up by seven years over the summer. Britain will have had four new governments by then (or possibly more than 10, based on the current rate of change). Any one of them could chuck the project on the scrapheap.

As for Crossrail and Battersea Power Station? 2019 has not been a vintage year. Bosses will have their fingers crossed for a smoother ride in 2020.