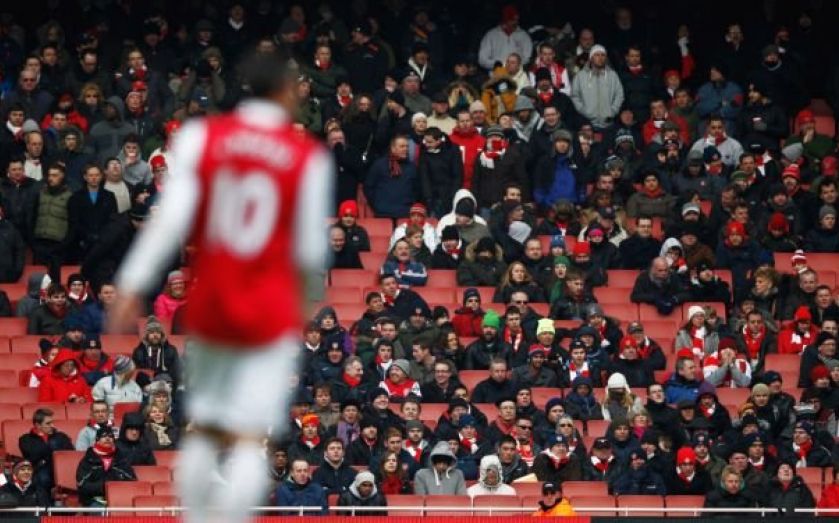 A total of 170,000 seats were left empty at Arsenal's Emirates Stadium during last season, an average of 6,550 empty seats per game.
Arsenal announced an average attendance last season of 59,786. However data released by the Metropolitan Police Service states that the actual attendance was 5,998 lower at 53,788.
As is common practice amongst Premier League clubs, Arsenal records attendance by number of tickets sold rather than number of people through the gate – the figure recorded by the Met.
The actual attendance was revealed thanks to a Freedom of Information request by blog "A is for Arsenal".
Arsenal’s published attendance of 59,786 equates to an impressive occupancy figure of 99.1 per cent, however the Met's estimate puts it at 89.1 per cent.
Tannoy announcements of large attendances to a stadium dotted with empty seats has become a familiar source of derision amongst Emirates regulars, with blogger A is for Arsenal saying this had prompted him to investigate because it was “clearly not accurate”.
The findings reveal that while Arsenal is selling the vast majority of tickets, many are then left unused – a fact likely to annoy many of the 40,000 supporters on the club’s season ticket waiting  list.
The most expensive season ticket in the Premier League, priced at £2,013, is to be found at the Emirates.