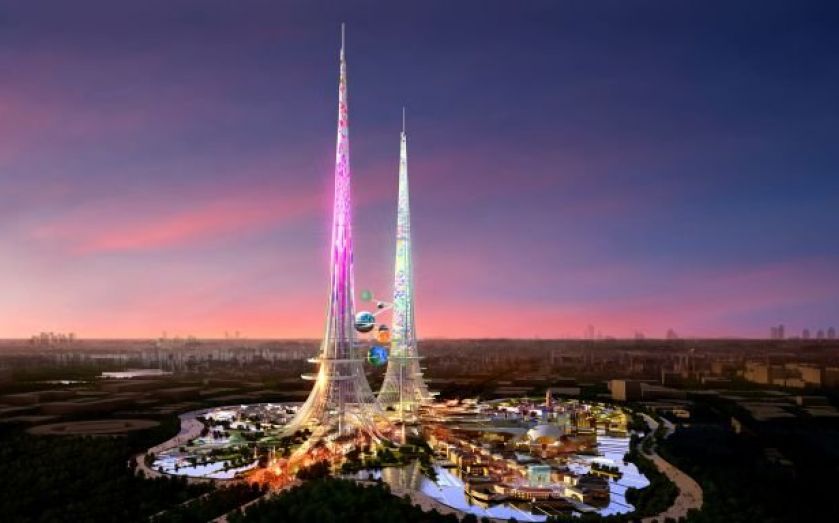 The Phoenix towers, when they are built, will be the tallest buildings in the world.
Each standing at over a kilometre in height, they will be based in Wuhan, the capital of China's Hubei province. Besides being extremely tall, thin, and glowing bright pink, they will also attempt to clean the polluted environment.
The towers will contain “thermal chimneys” which, when heated by the sun, will absorb polluted air and water from across nearby lakes. Once inside the chimneys this air and water will be filtered and cleaned before being released back into the environment. There will also be "celestial restaurants", shaped like planets, in the space between the two towers.

The "celestial restaurants" are expected to attract tourism (Source: Chetwoods)

Designed by London-based architecture firm Chetwoods, the towers are due to start being built within the next two years.
Laurie Chetwood, chairman of the architecture firm, explained to CNN that these towers will be important in preserving the region's lakes. "You can imagine the pressure those lakes are under, [with] a huge dense city growing around them," he said. "So we thought we could not only attract attention with the towers but also breathe life, literally, into the lakes."
He added that the process is tantamount to "putting air back into the water like in a typical fish tank…. but we're also cleansing the water and putting it back”.
The name of the towers stems from the Chinese use of the phoenix as a metaphor for two dangerous birds, one male and one female, feeding off each other for the benefit of all.

The tallest buildings in the world

When it is built, the Phoenix Towers will stand over 100 metres taller than the current tallest building: Burj Khalifa in Dubai. The current top ten buildings in the world are all in the Far East or Middle East.