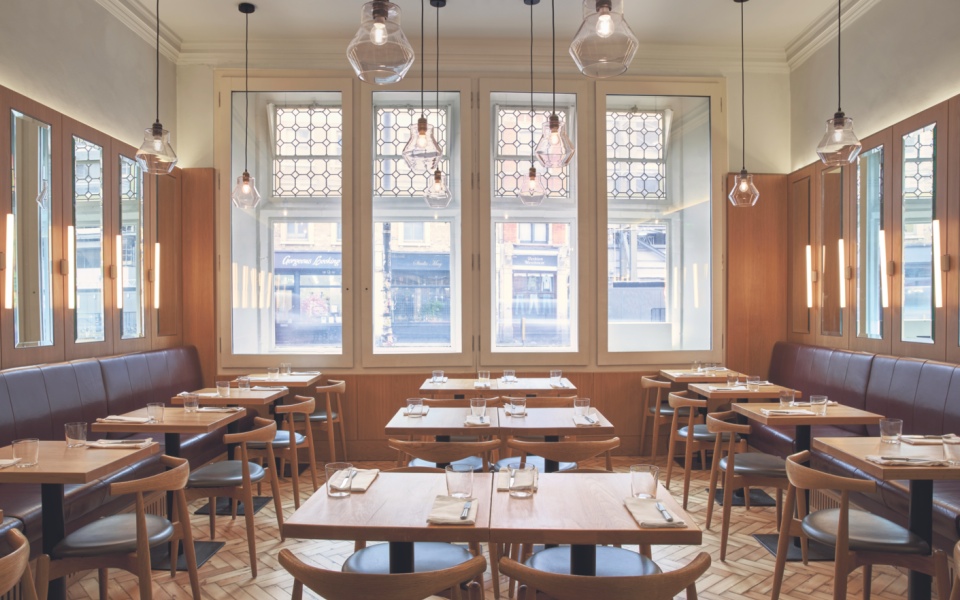 Each week we pick the best places to wine and dine your favourite clients.

WHAT IS IT? The Whitechapel Gallery has converted its ground-floor cafe into a more serious dining space, creating an intimate, light-filled restaurant serving modern British cuisine that sits somewhere between “casual lunch” and “proper dinner”. It’s named after Charles Harrison Townsend, the architect who designed the distinctive art nouveau building in 1897. It’s a relatively small venture, a mere 36 covers, although if you’re hosting a casual business lunch you should be able to bag a walk-in so long as there isn’t a newly-opened exhibition.

WHO’S RESPONSIBLE? It’s the brainchild of director Nick Gilkinson, previously of Anglo, and head chef Joe Fox, who used to ply his trade at Petersham Nurseries; a solid combination in anyone’s book. The menu claims to be inspired by the “wily creativity” of the gallery’s namesake, made up of traditional British dishes with European and colonial influences.

WHAT SHOULD I ORDER? The menu is divided into snacks, starters and mains, the former including a well executed fried squid dish with a vivid green garlic mayo, and some decent purple sprouting broccoli in hazelnut crumb. There’s an absurdly generous starter of potato dumplings with potted brown shrimp, which would probably be better placed as a main but is satisfying nonetheless. Egg, flowering kale and battered anchovy looks great but is a hotchpotch of flavours and temperatures (cold egg, warm kale, aggressively salty anchovy).

I realised at this point I’d probably over-ordered, something that was confirmed when a vast bowl of granny-style lamb mince and creamed potato arrived, although it was so well prepared I somehow managed to put it away. The piece-de-resistance was an excellent curried potato cake with chard and pureed carrot, suffused with a faint hint of curry. Wonderful stuff, and with mains averaging around £16, you certainly get your money’s worth.

AND DESSERT? Yes, although after all that I didn’t try any of them.  If you pace yourself better than I did, you could order ginger and treacle cake or rhubarb crumble.

WHAT ABOUT DRINKS? There’s a decent selection of wine available by the glass, and bottles ranging from £24 to almost £100. You could also get yourself a negroni, provided you don’t plan on getting very much work done when you get back to the office.

Other restaurants in London’s culture hotspots

London is not short of galleries. The Tate Modern, British Museum, National Gallery and Natural History Museum all draw more than 5m visitors a year. Being host to so many humans gives you something of a captive audience, and captive audiences don’t always inspire top-quality cuisine (see also: hotel restaurants). So which London institutions are worth eating in?

If you’re in the mood for fine dining, it’s hard to fault Skye Gyngell’s Spring in Somerset House. The former Petersham Nurseries Cafe chef – who infamously called her Michelin star a “curse” – is known for her meticulous attention to detail and irreproachable sourcing of produce. The dining room is brighter than heaven itself, every surface gleaming white, a blank canvas, so to speak, for her seafood-, fish- and vegetable-heavy cooking.

Also at Somerset House is the more intimate Bryn Williams, which serves that catch-all cuisine “modern British”, albeit with a European-meets-Welsh accent. Williams recently devised a special mushroom-based menu to complement the Mushrooms: The Art, Design and Future of Fungi exhibition over the corridor in the exhibition space.

The ICA may not have the clout of the Tate Modern, but it has a restaurant that’s a destination in its own right: Rochelle. The dining room, overseen by Margot Henderson and Melanie Arnold, is a lesson in casual eating, a place where excellent food comes without any air of pretension.

“We have a varied and creative group of people who frequent the gallery,” says Henderson. “They have often come here to drink up the culture. I like to think some of our dishes are very ICA: a little bit hippy, very vegetable based… It is a joy to be surrounded by such beautiful buildings. The foliage always lifts my heart as I walk through the park.”

Another lesser-known gem is the Garden Cafe at the Garden Museum, where you can enjoy seasonal modern European cooking amid more foliage than you can shake a spoon at.

Read more: The Lighthouse film review: Robert Pattinson and Willem Dafoe shine in this tale of madness at sea

Rather more traditional is the National Theatre’s House restaurant, which was overhauled a few years back. While not quite a destination in its own right, it’s a more than adequate stop-in if you’re about to watch, for example, Lesley Manville star in The Visit (and in this instance you’ll need the extra fortitude to sit through the three and a half hour marathon).

For something a little more off the beaten track, you could try Mãos, located at the Blue Mountain School in the East End, run by Christie Brown and James Brown. “We love the fact that Mãos is part of a bigger project,” says Christie. “We see it as a cultural space in itself. We break the boundaries of regular restaurant dining by encouraging our guests to explore the space and engage with the chefs while they are dining. There’s a complete removal of ‘front and back of house’ – the whole process is visible from the outset.”