The European Central Bank is still ignoring the elephant in the room.

We've got a policy decision and presser coming up from the central bank this afternoon, but analysts aren't exciting anything too exciting at either event.

Yet Robert Kuenzel of Daiwa Capital Markets Europe says that the ECB "clearly understands that it is already facing a serious disinflation problem".

"The risks of outright deflation are non-negligible," says Kuenzel, while many of the Eurozone's member states are already in deflationary territory themselves.

March saw Eurozone CPI at a four-and-a-half year low of 0.5 per cent, with core inflation at a fresh all-time low. April failed to bring any respite, says Kuenzel, with a flash estimate of headline inflation at a "disappointingly low" 0.7 per cent.

Despite that, Daiwa doesn't expect to see a rate cut from the ECB today, or any time in year this fact. They expect the central bank to "play a waiting game instead" – in the hope that negative energy and food price effects subside in the coming months.

Deutsche Bank's economics team also expects no surprises today, but do see action ahead at the central bank's June and September meetings.

They suggest that September could see something as strong as the announcement of quantitative easing, in the form of a private asset purchase programme on a modest scale, and directed towards business lending.

The Eurozone is seeing signs of inflation in one place: the pressers of ECB president Mario Draghi. Thalesians notes that mentions of "inflation" have risen sharply. 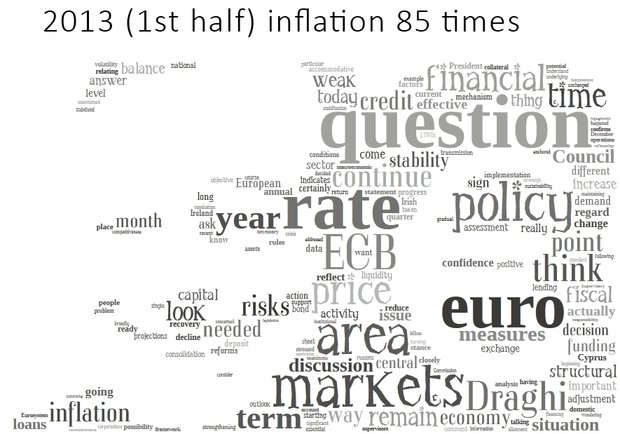