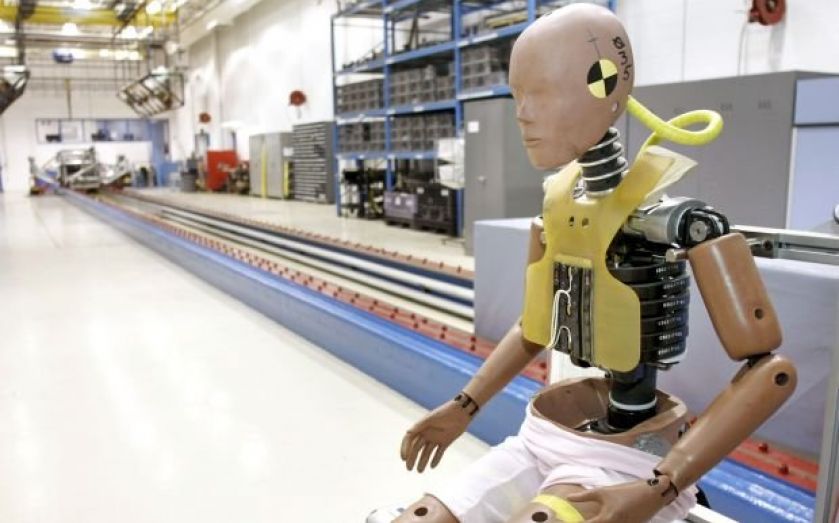 Crash test dummies briefly became an object of fascination in the 90s, when they were the subject of a cartoon – but since then they've pretty much been going about their daily business, being slammed into walls to show manufacturers how the human body reacts to car crashes.

Recently, though car makers have encountered a problem. Traditional crash test dummies were modelled on a tall-ish person with a healthy body-mass index (BMI), weighing just under 12 stone.

But as people are getting bigger, so are car seats – and so is the problem of effectively testing the safety of cars on all shapes and sizes. Particularly when you take into consideration that studies show obese drivers are 78 per cent more likely to die in a car crash than their skinny counterparts – because, apparently, they tend to suffer from sleep disorders and therefore fall asleep at the wheel.

So crash test dummy manufacturer Humanetics has developed a dummy based on the larger passenger, with a BMI of about 35 – about 19st 3lb – which is classed by US health regulators as "morbidly obese".

Chris O'Conner, the company's chief executive, told ABC News that "an obese person has more mass around midsection and a larger rear which pushes them out of position. They sit further forward and the belt does not grasp the pelvis as easily". Larger dummies will therefore enable car manufacturers to try out more robust seatbelts and airbags.

Ironically, the dummies are still at the testing stage, but the company says it hopes to bring them into full production at some point next year.