What's in the Walkie Talkie building? From the Sky Garden to RSA, here's a storey-by-storey breakdown of every restaurant, bar and business in 20 Fenchurch Street 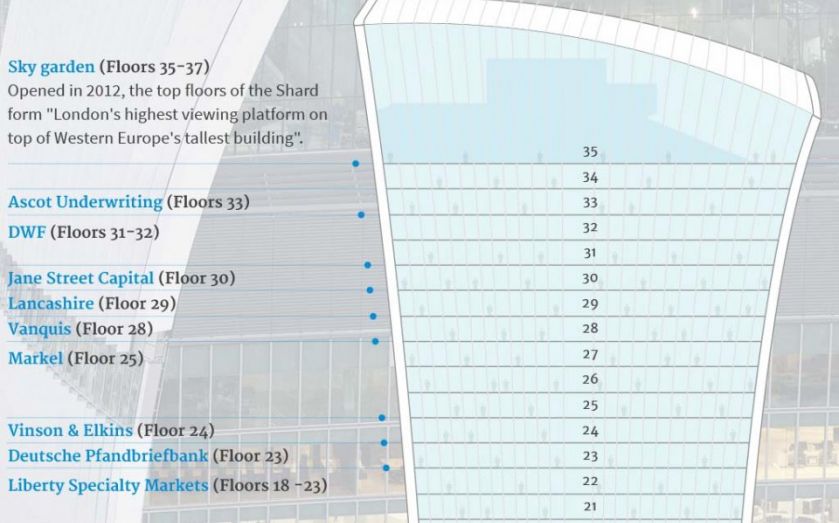 It may have been open less than a year, but from frying eggs to creating wind tunnels, 20 Fenchurch Street – better known as the Walkie Talkie – has already had its fair share of controversies.

But what’s actually inside? And what does its Sky Garden (also controversial after its developers decided to make it ticketed, despite its “public” status being a condition of planning) actually look like?

From Darwin’s Brasserie at the top, to reinsurance firm Sirius International on the fourth floor, here’s every business, bar and restaurant taking up space in the building.

Feeling inspired? Here’s how to book a ticket to the Sky Garden.

This 51m wide terrace belongs to an office which was let earlier this month. Read more

The Sky Garden terrace offers views across the river

The “park in the sky” includes rare plants. Have a look inside here

Although its neighbour, the Cheesegrater, towers above the Walkie Talkie, its distinctive shape makes it easily recognisable

The Sky Garden is billed as London’s highest public garden

The Sky Garden offers 360-degree, uninterrupted views of the City of London

Stability for the building is provided by the fins on either side
Share:
Tags: bridges and landmarks London buildings