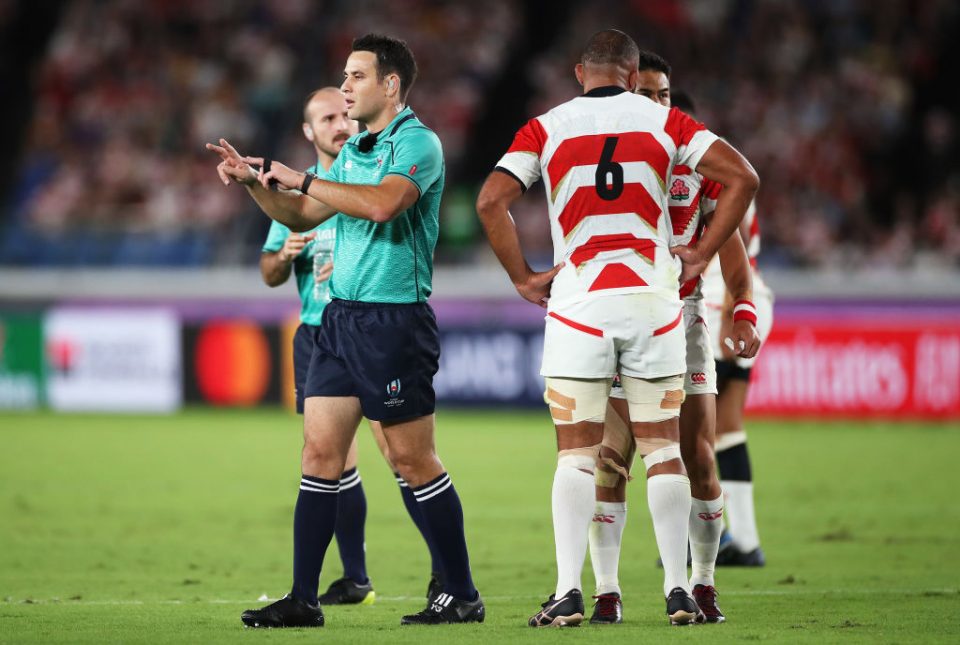 Since the video assistant referee’s introduction to the Premier League this season, the technology seems to have caused as much controversy as it was intended to resolve.

The current Rugby World Cup, which has shown the benefits of a sport accustomed to an additional match official overseeing a feed of the action, has only thrown that into a more unflattering light.

Here City A.M. examines what football’s governing bodies could learn from rugby union’s use of the technology in Japan.

In rugby, the referee will make an on-field decision and ask the television match offical (TMO) whether it is correct.

If a try has been scored but there is some debate as to its legality, whether due to a knock-on in the build-up, grounding of the ball or something else, they will decide whether to award a try and then confer with the TMO.

This will then result in the referee asking the TMO something along the lines of: “Is there any reason why I can’t award the try?”

This was the case when Josh Adams scored a try for Wales against Fiji last week, only for it to be ruled out because his foot had brushed the white of the touchline prior putting the ball down. There was a reason not to award the try.

Similarly, when Scotland played Ireland Rory Best got on the scoresheet from a driving maul. The Scots queried the grounding of the ball, but referee Wayne Barnes assured them that the TMO had checked it.

In football, the only time this seems to work effectively is for offside. When it comes to penalties and red cards, VAR only interferes when there is a “clear and obvious error” which, while also subjective, creates a tendency for VAR not to get involved.

Arguably some of the issues lie in the laws and their interpretation by different competitions authorities, but more clarity in the terminology officials use, as well as with the laws themselves, could go a long way to improving consistency and VAR’s effect.

As well as the terminology used, in rugby there appears to be more teamwork among officials both on and off the pitch to ensure a correct decision is made. That is not always the outcome, as the World Cup has proven, but it can certainly reduce the chances of human error.

A lot of the controversy at the tournament has revolved around high and dangerous tackles, with World Rugby clamping down on head contact.

This has resulted in officials deliberating over red cards longer than usual as they try to enforce new, stricter rules. A great example of this arose at the weekend when Ireland’s Bundee Aki was sent off in the first half against Samoa.

The inside centre made a high tackle and his shoulder collided with the opponent’s head. Referee Nic Berry and his assistants watched on the big screens in time with the TMO as they all conferred.

Berry then asked if they disagreed with what he was seeing – a dangerous tackle without mitigating circumstances – before coming to the correct decision.

There were similar exchanges between officials when Argentina lock Tomas Lavanini was sent off for his tackle on Owen Farrell and when Australia’s Samu Keveri was sin-binned for his forceful arm to Rhys Patchell’s throat as he tried to fend off the oncoming Wales fly-half.

Dealing with incidents in this fashion can take time, but in rugby it seems to work better than football, where the Premier League has actively sought to limit game interference.

One of the reasons it is more effective in rugby is that fans are kept better informed of what is happening – and, in some ways, this adds to the drama.

Those in the stadium can watch replays of incidents on the big screens at the same time as the officials and make their own judgements, while those who have purchased ref link technology can listen to the referee’s conversations with the TMO – as can television viewers at home.

Understanding the thought process of the officials humanises them, something that can be lost in football. It also keeps fans informed of what is going on and why a specific decision has been arrived at.

France had two tries ruled out by the TMO in their match against Tonga for incidents in the build-up. One was due to a forward pass and another a knock-on.

In both cases the fans being aware of why the tries were disallowed and following how that decision was made enhanced the experience, while correct decisions were also reached.