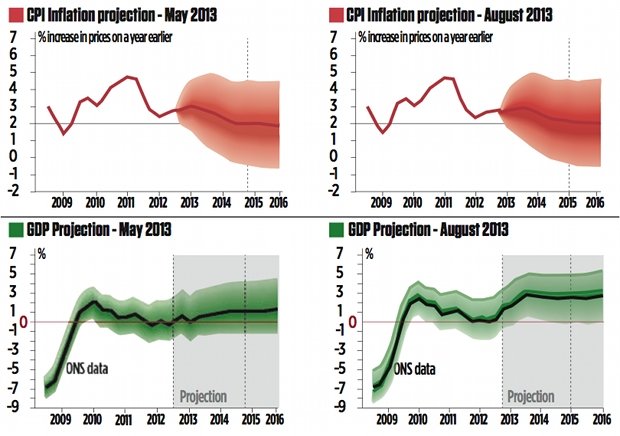 Q Does this change mean that interest rates are now set until 2016?

A The Bank’s rate-setters will still meet on a monthly basis, but the subject of discussions is likely to lean towards whether the new so-called knockouts have been breached. When the unemployment rate heads below seven per cent, discussions of whether to raise rates will come to the fore.

Q Is there any way rates can rise while unemployment is above seven per cent?

A There are three ways out of the pledge for the Bank: if the  financial policy committee suggests  low rates are creating instability; or if people begin to expect higher inflation; or if the Bank’s forecasts project that CPI will be 0.5 per cent or more above target in 18 months.

Q Is the bank paying less attention to its inflation target?

A Mark Carney tried to reassure the country that price stability is still the Bank’s most important goal, but inflation has been above the two per cent target since 2010, and looks to stay there for the near future, even by the Bank’s own predictions.

Q Why did the monetary policy committee pick unemployment?

A The MPC considered other guides for policy, like the level of growth in nominal or real GDP, but settled on unemployment, like the Federal Reserve. Carney  argued that it is a good indicator of the state of the economy, is rarely revised, and is easy for people to understand.

Q What does this new change of policy mean for sterling?

A The pound dipped below $1.525 just before the announcement, before rising quickly as the news broke, trading as high as $1.55 later in the day. FxPro’s Simon Smith said: “The Carney we have running the Bank is different from the perception of a dovish QE advocate”.

WHAT DID HE SAY?

While Mark Carney yesterday revealed new guidance over the conditions necessary for interest rates to rise, the publication of the Inflation Report revealed more about his and the Bank of England’s views of the economy.

Following an upturn in the UK economy, the Bank now expects GDP to expand by about 1.4 per cent this year and 2.4 per cent next year – up from earlier estimates of 1.2 per cent and 1.7 per cent growth.

But the new governor remains bearish. “There’s understandable relief that the UK economy has begun growing again, but there should be little satisfaction,” he said.

Carney admitted that inflation “is likely to remain” around its current 2.9 per cent level in the near term, but expects it to fall to two per cent in around two years’ time.

The Bank’s new super-regulators can help guard against the risks of easy money, Carney said. “We recognise a long period of low rates, if unattended, could lead to financial vulnerabilities. That’s why we have the financial stability knockout, so we get the benefit and advice of the financial policy committee.”

Carney repeatedly stressed the significance of productivity in the UK. The Bank will test “the degree to which productivity recovers alongside demand”, he said, adding later: “British firms will need to build their competitiveness by investing and improving productivity” in order to boost exports.

The new policy has several intentions, Carney said. “This is about making stimulus more effective. Second is reassurance. Third is to test how much excess supply there is in economy.”