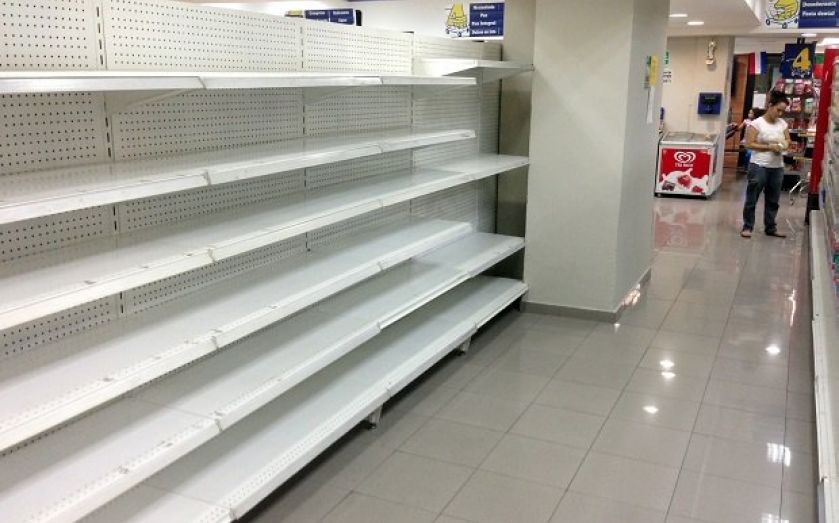 The President of Venezuela, Nicolas Maduro, has announced plans for a major mandatory fingerprinting system to combat the increasingly dire food shortages and rampant smuggling afflicting the Latin American state.

He said the fingerprinting system would be similar to the one the country uses for voting and was intended to stop Venezuelans buying too much of a single item. Venezuelan authorities report up to 40 per cent of the goods the country subsidises for its domestic market are smuggled to Colombia and sold at higher prices.

The policy was immediately denounced by the opposition who said the measure treated citizens as thieves, breaching their privacy, and likened the measure to rationing.

The opposition argued mandatory fingerprinting is yet another demonstration of the government's "failed socialist policies", which has seen essential goods driven from shop shelves, oil production plummet and growth slow to a snail's pace.

Venezuelan student Oswaldo Silva, told City A.M.: "The implementation of a Biometric System in Supermarket chains is, without a doubt, a new control measure over venezuelan society that doesn’t represent a solution to one of the many problems of the country as the scarcity."

Using fingerprinting machines, similar to those used in elections, would allow the government to monitor and restrict the purchase of certain products per day, according to what they consider "fair". Thereby, the Venezuelan government will become direct intermediary of commercial transactions, very arrogantly deciding the amount and frequency with which an individual can buy what he or she wants and needs."

Venezuela has been running short of basic goods like toilet paper, soap and cooking oil for over a year. Strict currency controls and a shortage of US dollars have hammered consumers' ability to get imported goods.

Furthermore, price controls have crippled the ability of producers to make profits and correctly identify market signals. Maduro hinted the government might relax some price controls but did not go into details.

It has not been announced when the policy will be implemented, but government officials said the system could be in place by December or January.

Earlier this month, in a desperate move to combat a wave of smuggling, the government deployed 17,000 troops on the Colombian border and began closing crossings at night. The Colombian government agreed to help seal the border to stop lower-cost goods being smuggled to from Colombia.

A system that needs to implement heavy surveillance in local food markets or deploy 17,000 troops along the border to prevent the smuggling of staple food items is a failed system indeed. Rather than allocating time and resources into policing the purchases of apples and pears, President Maduro should abolish price controls, creating an economy where commerce and consumption are encouraged, not criminalised.

The situation got so bad in January, thousands of Venezuelans took to the streets to protest soaring inflation and rampant crime. In 2013, Venezuela recorded 25,000 murders, five times the amount seen in 1998.

Since then, the crisis has only escalated, with the central banks' scarcity index reaching an eye-watering 21 per cent in April, meaning one in five basic goods were out of stock at any one time, while inflation rose a crushing 62 per cent in the year to June.