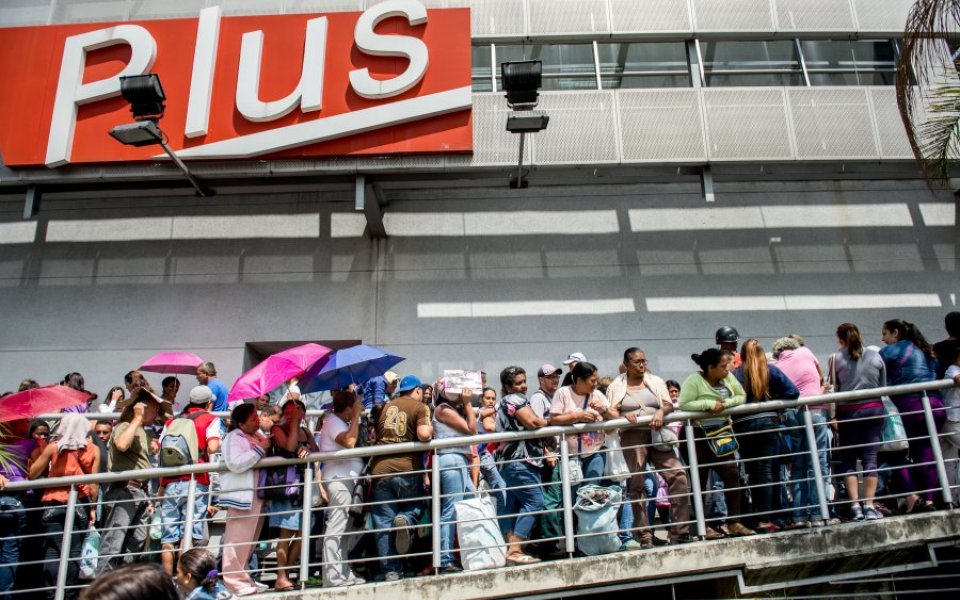 Once the leading light of Latin America, low oil prices and state overspending have left the economy shattered. Now it’s heading for default on its debts.

“I don’t think the market’s in any doubt that it will default, they just don’t know when,” says Paul Wetterwald, chief economist of Indosuez Wealth Management. “It is impossible to go on like this. It is even worse than the Greek situation.”

Venezuela was the wealthiest country in South America with oil reserves among the largest in the world. It’s a place with “enormous potential”, says the World Bank. But it relies on oil for close to 100 per cent of its export revenue and the slumping price of black gold has hit the economy – and ordinary people – hard.

There are shortages of basics including food, toilet paper and soap, while inflation is estimated to be between 150-200 per cent, sending the prices of goods that are available sky-high. Condoms are selling for $20 each. McDonald’s hit the headlines when it removed french fries from the menu after a potato shortage, but now they’re back, a large serving costs $133.

Venezuelans plan their day around water and power shortages, which have been worsened by the El Niño weather pattern since a lack of rain is hindering power production from its mostly hydroelectric plants. At night, it’s one of the most violent countries in the world.

The economy’s in its worst state since 1940, according to analysis from Capital Economics. But much of what’s going on is guesswork, since the government gave up on releasing official inflation and GDP data at the end of 2014, probably because there’s no point confirming what anyone can see is a dire situation.

How have things gone so wrong? Many experts place the blame squarely on poor governance. “Venezuela spends most of its cash on quite egregious social programmes because poverty levels are so high,” explains Dougie Youngson of finnCap.

Venezuela’s black gold is easy to reach and costs $36 a barrel to take out of the ground. With oil prices hovering around the £31 mark, things shouldn’t be so bad. But the country needs oil prices between $100-$160 a barrel to break even on its spending plans.

“The main point is there’s a huge public deficit. I think they made a choice to spend on social programmes and as long as the oil price was high, it was okay,” says Wetterwald.

There’s a range of other issues, including that oil production facilities have not been properly maintained so output is lower than it could be. Doing business in Venezuela is tough, since the culture is ridden with corruption.

The government, led by Nicolás Maduro, has taken action. Last week it devalued the main exchange rate, known as the Cenocex. It’s used for importing essentials including food and medicine, and was weakened to VEF10/$, down from VEF6.3/$.

It also raised the price of gasoline by 6000 per cent – another burden for the country’s poor – although petrol is still the cheapest in the world.

But these measures are “simply too little too late, and fall chronically short of what is needed,” says Edward Glossop of Capital Economics.

“After almost two years of economic crisis and no reforms these measures are welcome… But they are nowhere near enough to alleviate the escalating crisis,” he says.

The biggest immediate concern is the lack of dollars. Although the government says the bolivar-dollar exchange rate is VEF10/$, there’s a thriving black market where dollars are bought for VEF1000/$. That shows how dollars are in exceedingly short supply and is a decent measure of how much the bolivar is really worth.

In the meantime, Venezuela is receiving loans from China and Russia, which should help it avoid default this year, but they don’t come for free. “The fiscal side of things is getting rather complicated and whether they need to restructure the debt remains to be seen, but there’s a chance they might have to,” explains Sergei Strigo of Amundi.