Venezuela is a humanitarian crisis – and the British left just laughs 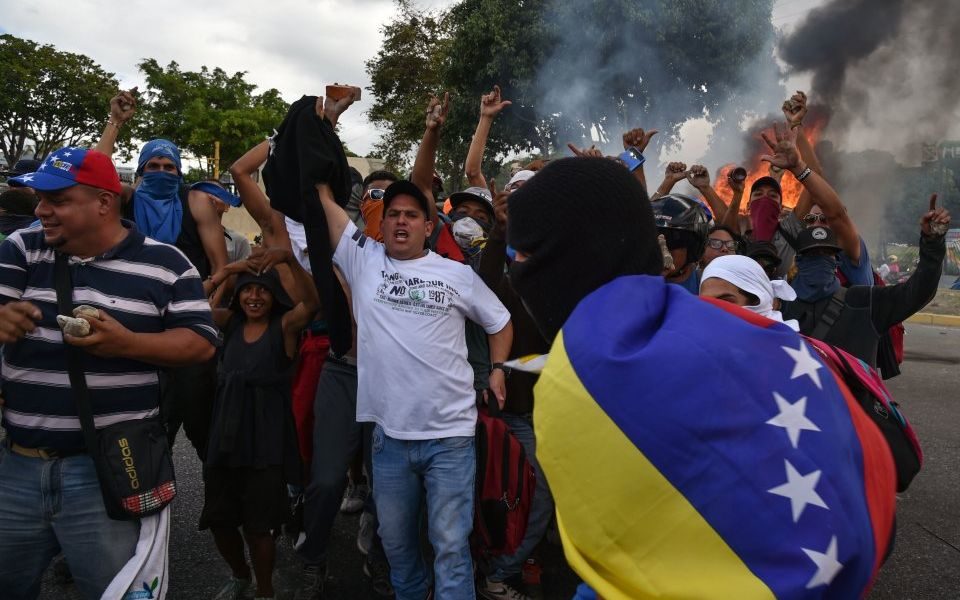 “Nice company you’ve got there, @Dyson! Shame if we nationalised it.”

So tweeted Owen Jones, Guardian columnist and fierce supporter of Jeremy Corbyn, in response to news that Dyson is relocating from Britain to Singapore.

The tweet sparked the predictable outrage from people who believe that a private company should be able to take its operations wherever makes the most market sense.

But Jones was trolling the media. He had made clear previously that his call to nationalise Dyson was a joke, and gleefully mocked anyone who dared to take it at face value.

Obviously he wasn’t being serious – how could anyone be stupid enough to think that he’d actually advocate the state forcibly nationalising a private business?

You might have missed this, because the far left had a new target by Thursday: Donald Trump’s intervention in Venezuela.

Following vast protests on Wednesday morning against President Nicolas Maduro, who has presided over the country’s economic and political death spiral, the opposition leader called for fresh elections. Juan Guaido claimed that Maduro’s mandate was invalid, and appointed himself interim President.

Trump promptly recognised Guaido’s claim (as did Canada, and later the UK), calling Maduro’s leadership “illegitimate” and warning of tougher US sanctions on Venezuela.

Cue Jones: “Pundits who denounce Trump as a fascist and a mortal threat to the world order, now cheer him on because, in time-honoured US tradition, he’s helping to engineer a coup in Venezuela.”

The situation in Venezuela is messy and complicated. Some experts are already warning that Trump could have done more harm than good, and there are genuine fears of civil conflict. We should be very wary of cheering him on.

But that isn’t the whole story. Because the British left in general – and Corbyn and Jones in particular – have a long history of fetishising the Venezuelan regime, even as Maduro and his predecessor Hugo Chavez impoverished, starved, and subjugated their own people.

Venezuela was meant to be a template for socialism done right. Thanks to its massive oil wealth, the state was able for a time to offer what looked like a socialist panacea: free or heavily subsidised healthcare, energy, housing, education, and grand public projects. It was held up by the global left as proof that socialism really could succeed.

“Thanks Hugo Chavez for showing that the poor matter and wealth can be shared,” tweeted Corbyn in March 2013, when the former President died.

The trouble was that it didn’t work. As the state imposed greater restrictions and taxes on private businesses, production slowed. Price controls led to spiralling shortages of basic goods, from food to fuel to toilet paper. And when companies tried to change course or relocate, the state forcibly took them over.

Take Kimberly-Clark. In 2016, the hygiene products firm announced that it was halting production in Venezuela as it couldn’t obtain supplies due to shortages. The government called the factory closure “illegal” and seized it. Maduro made similar threats to take over beer factories owned by one of his critics.

Meanwhile, inflation and national debt skyrocketed, millions fled the country, hospitals ran out of medicines, and people began to starve.

The government became ever more draconian. States of emergency were called and street protests were met with military force. Opposition politicians were arrested. And last year, Maduro changed the constitution to cement his own power.

And throughout it all, those on the British left remained stubbornly blind to anything that challenged their red-tinted vision of Venezuela’s socialist paradise.

In 2012, long after reports had surfaced about food shortages and oppression, Diane Abbott flew out to act as an “election observer”, invited by the government. She raved that it proved how “another world is possible”. Jones also visited, reporting uncritically that “Venezuela is an inspiration to the world”.

Since then, others on Labour’s hard left have doubled down. The last few years have seen riots, arrests, corruption and presidential power grabs that would shock anyone invested in democracy. Yet last month, Chris Williamson, one of Corbyn’s most supportive MPs, was still tweeting about a “huge social housing programme on track in Venezuela”.

As for Corbyn himself, he was celebrating Venezuela’s “achievements” as recently as June 2015.

On Wednesday night, while the Venezuelan people rallied around Guaido to try to take back their country, Corbyn was hosting one of Maduro’s diplomats in parliament at an event for exchanging ideas on human rights.

This newspaper reported yesterday that the humanitarian crisis in Venezuela was not discussed.

Which brings us back to Dyson, and to Jones jokingly suggesting that the UK state should punish a company for making a business decision that it doesn’t like – exactly as happened in his beloved Venezuela.

The world is sadly full of brutal regimes led by despots from a wide range of political ideologies. What is particularly tragic about Venezuela, however, is the British left’s unquestioning support for the foundations of what we now see today.

For years, they have cheered on the country’s leaders, even as their policies of extreme state control turned what could have been a vibrant emerging market into a humanitarian catastrophe. And now they have the gall to joke about enacting such policies here in Britain.