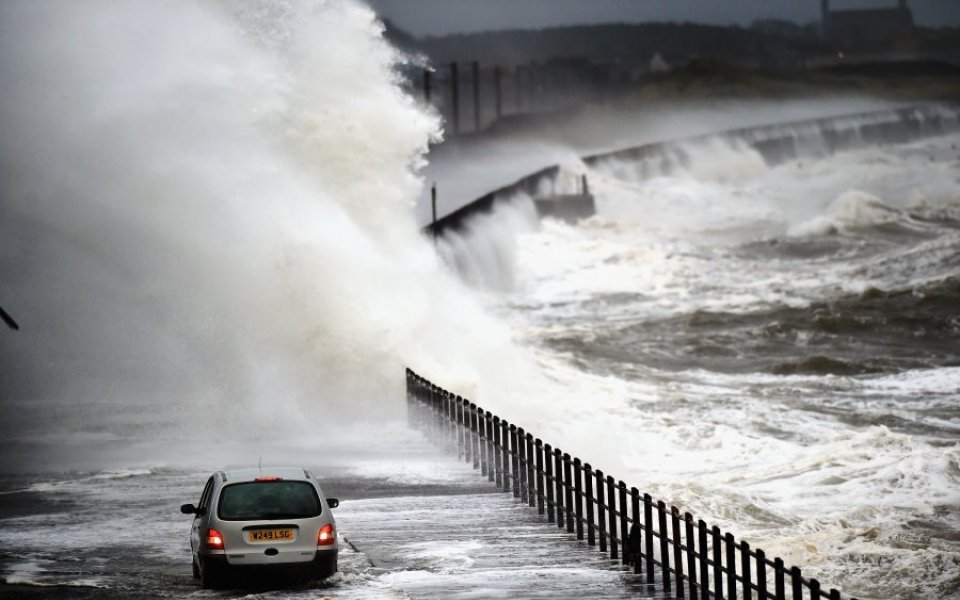 The Met Office has issued an amber alert as parts of Scotland continue to be hit with heavy rain, flooding and strong winds from Storm Desmond this weekend.

Forecasters have warned that up to 200mm (7.8 inches) of rain could hit central and southern Scotland, Tayside and Fife over a 30-hour period.

Up to a month’s rain is forecast over the weekend prompting officials to issue more than 100 flood alerts and warnings.

Two severe flood warnings – the highest level of alert – have been issued for the River Tyne in Corbridge.

The normal monthly rainfall for December is between 60 and 120mm, depending on the part of the country.

Yellow warnings of wind and rain have also been issued for all of Scotland, except Orkney and Shetland.

Dumfries and Galloway Council said it was preparing for flooding similar to that which was experienced in 2009.

#StormDesmond to bring severe gales to parts of the UK this weekend. Latest warnings: https://t.co/ziqeF8z3D4https://t.co/aslhSiVSB7

Moving in from the Atlantic Ocean, Storm Desmond is sweeping over Northern Ireland over Scotland and is spreading south towards England and Wales this weekend.

Almost 2,000 people in Ireland are without power and some flights have been cancelled from Dublin Airport.

Cork Airport has said high winds forced the cancellation of inbound Aer Lingus regional flights from Birmingham and Glasgow as well as outbound to Glasgow.

Anyone travelling today is advised to check with their airline for the latest information.

#StormDesmond has caused a number of flight cancellations this morning. Please check with your airline for the latest information.

The Environment Agency, covering England and Wales, currently has more than 60 flood warnings, mainly in northern England but also parts of Wales and the Midlands.

It has been reported that more than 190 homes in North Yorkshire have been left with without electricity.

About 300 properties in north Wales remain without power amid gale-force winds and 2,000 people in the Republic of Ireland are without power.

Read more: Why our storms are called Barney, Frank & Nigel

Strong winds with speeds of 55 to 75km/h and gusting to 100 to 120km/h are also forecast throughout the period with the worst of the wind expected on Saturday afternoon.

Winds will be strong enough to topple trees sparking warnings to take extra care while out and about in the coming days.

Transport could be disrupted and flooding is likely from 02:00 on Saturday until 06:00 on Sunday in parts of Scotland.

The Met Office said: "Be prepared for the likelihood of flooding affecting properties and parts of communities.

"Watercourses may become dangerous, deep and fast-flowing, while some transport disruption seems likely."

The Road Safety Authority has advised drivers to check local and national forecasts and traffic updates before setting out.

Flooding closed roads in Cumbria including the A591 and A6. Residents are being urged to only travel if absolutely necessary.

Storm Desmond is the fourth storm to be named by The Met Office this winter, after storms Abigail, Barney and Clodagh to help raise awareness of severe weather.

Snow and heavy rain has already caused travel disruption in parts of Scotland this week. Snowfall closed roads in Midlothian, the Scottish Borders and parts of Edinburgh on Thursday night.

Routes in Midlothian, the Scottish Borders and parts of Edinburgh were among the worst affected by what police described as "extreme weather".

The weather warning comes on the same day as it emerged that we have had the gloomiest November for 86 years.

On top of this, it was a very wet month. The Met Office said: “Rainfall has been above average across most areas, but most notably across upland areas of north-west Wales, north-west England and southern Scotland where totals are almost twice the amount expected for November.”