THE UK is climbing the ranks of the most business-friendly tax regimes in the world, behind only three other countries in the western world.

Only Ireland, Canada and Denmark beat the UK in Europe and North America, and the UK comes 14th overall,  in a table of 189 tax jurisdictions worldwide. According to the newest Paying Taxes report from PwC and the World Bank, the British tax system has climbed two places in the last year, surpassing Luxembourg.

On average, UK firms pay 34 per cent of their commercial profit in tax, taking110 hours per year, and balanced across eight payments. The world average in each case is higher: internationally, companies pay 43.1 per cent of their tax in profits, spread over 26.7 payments, taking 268 hours. 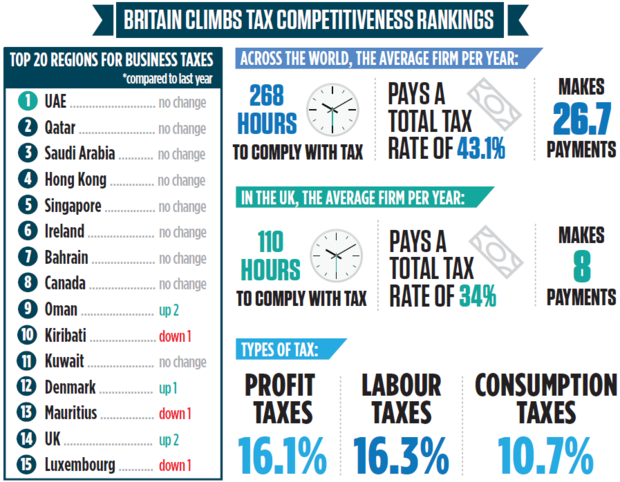 In the nine years that the report has been conducted, the amount of tax that firms pay is down nine percentage points on average, the number of hours taken down by 55, and the number of payments lower by seven.

However, the report also says that the rate of decline in the world’s tax rates has slowed, with profit taxes shrining at a faster pace than those on income. Excluding African countries where consumption taxes have been slashed, the total tax rate has actually risen.

“The financial downturn has had a significant impact on tax policies around the world. While some governments have stuck to plans to reduce tax rates, others have taken the opposite tack to get immediate revenues to plug debt or fund projects.,” said PwC’s Andrew Packman.