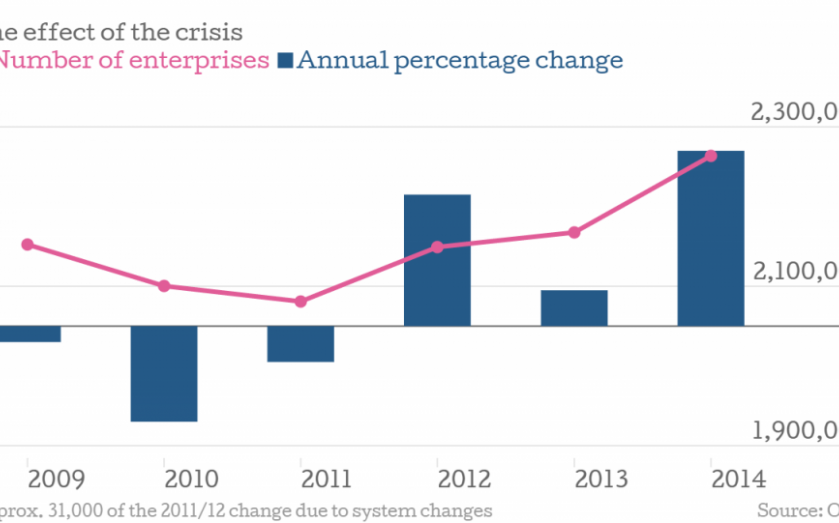 The number of businesses in the UK grew by 4.4 per cent between March 2013 and March 2014 as the recovery gathered pace, according to the Office of National Statistics (ONS) figures published this morning.

The total number of VAT and/or PAYE businesses rose by 96,000 during the period. The report also showed the continued march of companies and public corporations, which now account for 66.1 per cent of all businesses.

But are the figures being skewed? As with employment figures, which during the darkest period of the recession were inflated by an upsurge in those forced by redundancy into self-employment, there was some suggestion a rise in self-employment (self-employed people are counted as running a business) was dragging the new business figures up. The ONS said:

This increase in self-employment tracks the changes in the number of VAT and/or PAYE businesses over this period.

So where are all these businesses? As could be expected, they are not spread evenly across the country, with London the clear leader. 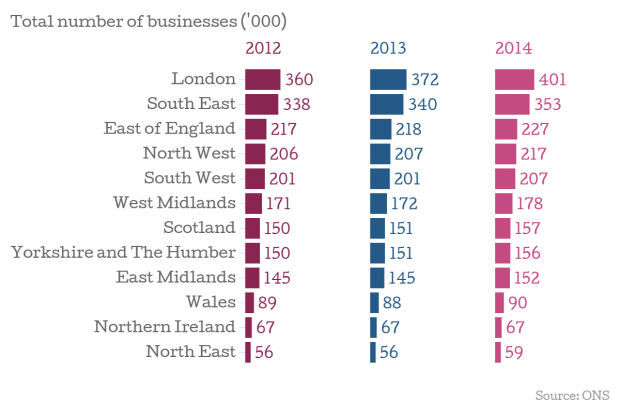 What's more, the number of businesses is the capital has grown at a faster rate than any other region:

That means it's widening its lead at the top of the regional table. According to the ONS, this is partly down to the regional labour market, which is not surprising. The unemployment rate in London dropped 2.3 percentage points in the year to June−August 2014, with the rate now at 6.7 per cent.

That's the the largest fall in unemployment in any of the UK regions. The national rate is 6.2 per cent. Here is how the businesses are spread out:

During the darkest years of the economic downturn, businesses started to close and their numbers decreased.

What is clear from the data is that the business recovery is real but, as withunemployment and wages, the turnaround is yet to be completed. Unemployment may be low at 6.0 per cent, but wage growth is slow and many workers feel they are under-employed. This situation may have driven workers into self-employed roles they would not have considered in the years before the crisis.

That is certainly what the figures suggest: self-employment hasn't been this high in the last 40 years.

With new businesses, the headline figures may be hitting the right notes but there is likely some way to go before the recovery can be deemed complete.