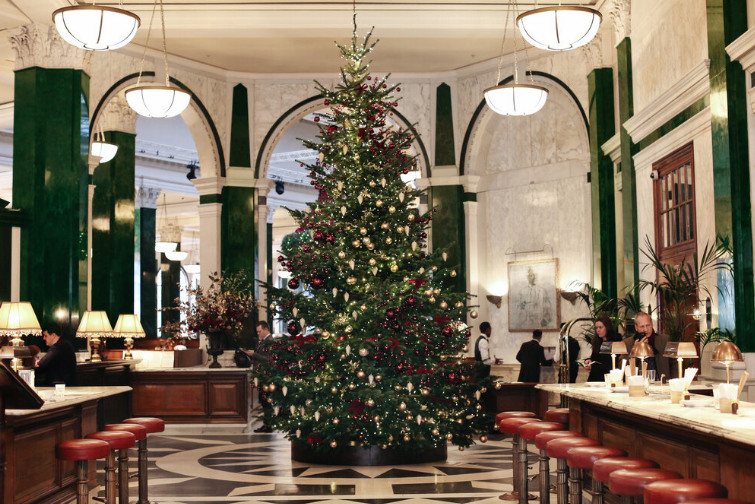 Inside the hustle and bustle of The Ned, I eventually find Lil Caldwell and Mary Wood tucked away in the comparatively quiet Library Bar.

The co-founders of floral design studio Grandirosa are sat on cosy sofas, and Wood, who is currently on maternity leave, has her sleepy three-month-old baby in her arms.

Judging by the way they finish each other’s sentences, I can tell immediately that this pair have been friends for a long time. And there is a good reason why we are in The Ned too, because the florists have installed a gigantic 18-foot Christmas tree in the main hall, having worked through the night so that it was ready for guests when they woke up.

It was also at The Ned where the pair got their first big break back in 2017, having quit their City jobs just a few months prior to focus on Grandirosa full-time.

Before committing to the new business, Wood had worked in marketing for Cancer Research UK, while Caldwell had been a lawyer at Freshfields for 10 years. “It is an amazing firm and I worked on extremely high-profile cases, and with top people in the industry,” she tells me. “It was great to be a part of that, and their standards are so high. But I just felt that I wasn’t doing something that I really loved.”

So how did they make the leap from these sturdy, rather conventional careers to building a firm centred on the frivolity of flowers?

Caldwell tells me that something twigged on her wedding day.

“The only time I got remotely emotional was when I saw the flowers,” she says, admitting that she had always been quite arty, but ended up taking a more traditional career path. “I eventually decided to do a floristry course, and my employers were kind enough to let me take a month off. I don’t think they were expecting me to come back and eventually want to do it full-time,” she laughs.

With the seeds now sown, Caldwell spent the following 18 months working in a floristry shop every Saturday, while doing her day job during the week. “I mean, you can say that you like floristry, but then there is the reality. And I’ll be completely frank: people think you just arrange flowers all day, but it is hard graft.”

Her first big job was to organise the flowers for a friend’s wedding, but working a 60-hour week and travelling abroad for conferences made it all pretty frantic. In the end, Caldwell asked for Wood’s help.

“I was like ‘sure, you can put a few flowers in my house’, but I didn’t realise my entire living room would be completely covered in them,” says Wood, chuckling.

“It really went from there, and then we just decided to do a few more private weddings together.”

The pair eventually upgraded from Wood’s living room to Caldwell’s shed, and they now operate from a studio in Hackney.

In just three years, Grandirosa has worked with clients across the hospitality, luxury, and fashion sectors, including Annabel’s club in Mayfair, Burberry, and Net a Porter.

The entrepreneurs also won both the Gold Award and the People’s Champion Award at this year’s Chelsea Flower Show for their sustainable installation, on behalf of John Lewis and Edinburgh Gin.

Did they ever have any regrets? Wood admits they had some doubts early on, which is partly why they operated out of the shed for such a long time before committing to a studio.

“We were leaving our jobs, so there was a big risk. We didn’t think we could take that overhead of a studio straight away, as we just didn’t have the confidence. But in the end, it didn’t feel like a big decision because we thought it would work out — we had one big conversation where we decided to go for it.”

Wood says that one family friend questioned their decision to leave their secure jobs, particularly during such an uncertain time.

Caldwell adds: “We are the most risk-averse people in the whole world, so we wanted to test the water in the beginning. There is the safety of having your career, but there is also wanting to build something that you love. Law is an amazing career and I enjoyed it, but for me personally, it was missing something.”

The risk certainly seems to have paid off, with Caldwell’s husband Stuart quitting his engineering job to work full-time with Grandirosa. And the pair admit that Stuart has been particularly helpful when it comes to installing the huge facades.

“Even when something steps outside of our comfort zone structurally, he makes us feel like it can be done,” says Wood.

And Caldwell says it has made clients feel safe knowing that everything — even down to the structural aspects — had been thought through.

“Obviously floristry is about making things pretty, but the type of floristry we do — the big installations and events — it’s less about beautiful bouquets and more about the wow factor. While there is a lot of smoke and mirrors, it has to be airtight and super safe.”

Floristry isn’t necessarily known for being a disruptive industry, but the pair have arguably won these big contracts because they have been bold in their creations, offering something a bit different.

And for anyone thinking of quitting their day job to pursue their side hustle, you can take inspiration from these two. They certainly know how to brighten up a room — with or without 4,000 fairy lights.