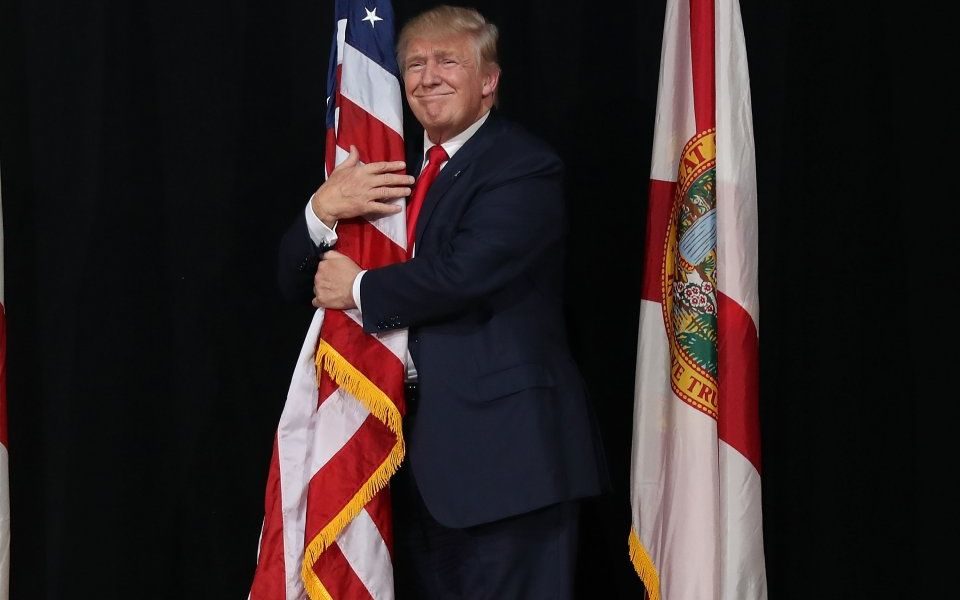 Is the “Trump bump” over? The surge in the stock market, the dollar and bond yields that welcomed Donald Trump’s arrival at the White House has shown signs of flagging as his first 100 days approaches.

Donald Trump sailed into the White House on a wave of populist, pro-trade polices. He promised to spend big, create jobs, secure the country’s borders and not meddle in foreign affairs.

This Saturday – 29 April 2017 – marks Trump’s first 100 days in the White House. The first 100 days of a presidency are supposed to be the most fertile period for turning campaign policy into new legislation.

The term “Trump bump” was coined as the market reacted positively to his pro-trade election policies, in the hope it would spark growth in the US and globally.

But recently there has been a souring of sentiment. Economic data has been less positive, Trump has failed to pass major pieces of legislation and his unpredictable approach to policy has caused some jitters in the market.

Could the “Trump bump” turn into a “Trump slump”, and what does it mean for your investments?

Why is “the first 100 days” of a presidency so important?

The first 100 days is considered the honeymoon period for a president because they usually come into office with a high approval rating.

Theoretically, that should make it easier for the president to push through legislation and set the tone for their administration.

How have stock markets performed over the 100 days?

Stock markets reacted favourably to Trump’s election win in November, followed by strong gains in the early days of the presidency. But the market has begun to signal doubts.

Trump promised to spend big on infrastructure which may help boost economic growth. A promise to cut taxes for companies, in particular, has helped inflate share prices.

But Trump’s failure to push through legislation and cement policies into law – in particular his failure to repeal Obama’s healthcare act – has cast doubt on his tax plans and contributed to recent weakening of the stockmarket.

As the chart below highlights, the slide in America’s S&P 500 index began just before his healthcare bill failed to pass through Congress.

However, many factors affect stock markets. The spike across four major indices – the FTSE 100, S&P 500, EUROSTOXX 50 and Nikkei 225 – at the end of the chart happened the day after it was confirmed Emmanuel Macron won the first round of voting in France.

How have individual sectors performed?

Investors have remained in defensive mode, despite gains made on the back of Trump’s rhetoric.

The chart below shows the performance of the major S&P 500 sectors in Trump’s first 100 days.

The chart has been rebased to 100. Sectors with a figure above 100 have made a gain during Trump’s first 100 days. Those with a figure below 100 have lost ground.

The election of Trump has so far been a positive for nine of the ten sectors. Healthcare and utilities stocks were among the strongest performers.

They are considered defensive stocks as they tend provide a consistent income and stable earnings regardless of the state of the overall stock market.

View from an economist

“Since then there has been a reality check as investors have had to take account of the checks and balances within the system.

“Thus far, Congress has failed to deliver a healthcare bill and to deliver tax cuts the president will have to do a deal which keeps deficit hawks in the Republican Party happy.

“Investor expectations on a big stimulus have been downgraded as a consequence. When combined with some mixed economic data this has caused a reappraisal of equity markets, especially given the high expectations built into current valuations in the US.

“While lack of progress in Congress has caused some frustration amongst investors, some of the worst fears have not been realised.

“President Trump did not name China a currency manipulator on day one and has now backtracked completely on this threat. Right now, co-operation with China over North Korea is the bigger priority.

“More generally, with the exception of one-off tariffs, we have not seen the wave of protectionism which would have led to a trade war and damaged the global outlook.

“Talks continue over the future of the North American Free Trade Agreement (NAFTA) and the administration seems more concerned with opening up export opportunities than stopping imports.

“Areas dependent on trade such as the emerging markets have breathed a sigh of relief.

“The president has however broken tradition on the US dollar by complaining about its strength. He appears to have ditched the ‘strong’ dollar policy, something which may have significant consequences in the next 100 days.”

How have bonds performed in the first 100 days?

As the graph below shows, bond prices have been rising since Trump entered the White House, contrary to expectations.

Despite Trump’s policies offering the prospect of higher inflation, which tends to lift bond yields, they have in fact tailed off since he came to office, meaning bond prices have risen.

To control inflation, interest rates may need to rise. As the expectations of rate rises increases, so too do bond yields. That is why we saw bond yields rise to some of their highest levels in recent years, before Trump took office.

However, the market appears to have reappraised its position as Trump has struggled to pass legislation through Congress.

How have currencies performed over the 100 days?

The dollar has strengthened against all major currencies, bar sterling. Trump’s inflationary policies, which should lead to higher interest rates in the US, make dollar returns more attractive.

Due to the recovery in the US economy interest rate rises may remain on a steeper path than the majority of other developed nations. If that remains the case, the dollar should continue to remain strong.

As with the rise in bond yields, it is questionable just how much of the dollar strength is down to Trump, rather other issues.

For instance, Brexit has hurt sterling and concerns over the outcome of European elections have curbed demand for the euro.

However, in recent weeks both currencies have strengthened against the dollar as political issues have become clearer.

The one currency where Trump has had a certain affect is the Mexican peso. Trump’s stance towards trade and immigration with Mexico had seen the peso fall sharply when he won the election.

However, since he took office, the peso has rallied reversing some of the losses.

What it means for your investments?

Buying and selling because of near-term events carries risk, particularly when it comes to politics. It is impossible to know exactly how the markets will react at any given point. For example, the markets initially reacted negatively to Trump winning the US election, before rallying strongly in the following months.

It is crucial to be clear on your long-term strategy and stick to it. For example, if you think that in the long-term investing in healthcare firms will provide you with a more stable income, then a new president should not make too much difference.

As has been shown in the US, what is promised in an election campaign does not always become law once a candidate gets into office.