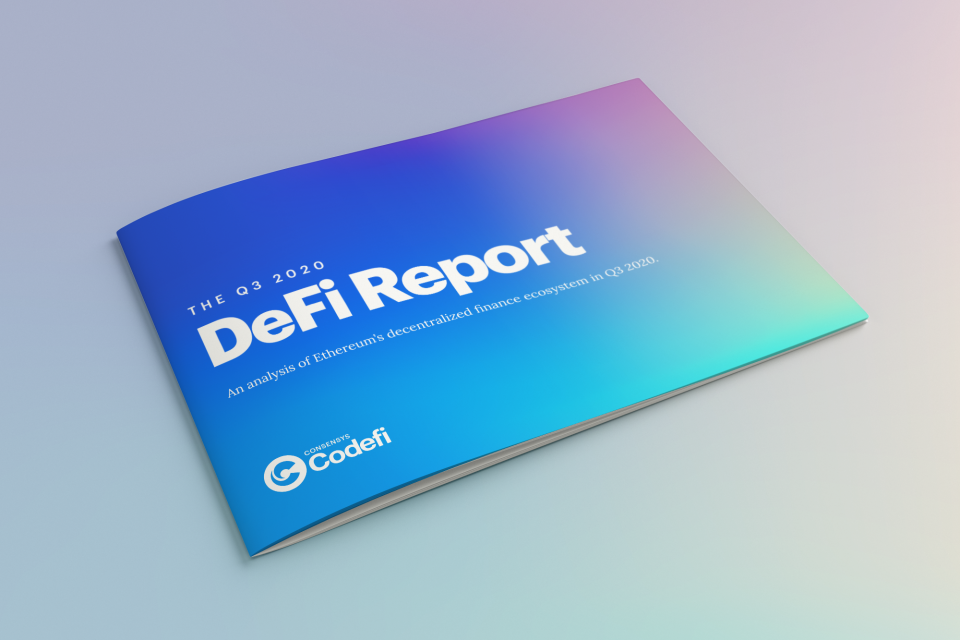 The trend: While stablecoins and lending platforms have long been the centers of activity in  the DeFi ecosystem, Q3 created a number of new, compelling decentralized exchange (DEX)  business models. Since the start of Ethereum, there have been a variety of ways to swap  tokens — from the more traditional order book methods to token-based models. It is clear that  there are certain security and pricing advantages that DEXes have over their centralized  counterparts. It wasn’t until Q3 of 2020 however, that one could really say decentralized  exchanges arrived. In the month of September, Uniswap’s trade volume was $15.4 billion,  nearly $2 billion higher than Coinbase’s in the same month. DEXes that use automated market  maker software (AMMs) now represent 93% of the decentralized exchanges market. While  Uniswap, Curve, and Balancer remain to be some of the biggest AMMs, a whole new crop of  DeFi companies have popped up in the past quarter. Q3 saw some of these new companies  attempting different approaches to creating optimal prices for swapping tokens and avoiding  impermanent loss.

The importance: AMM platforms were able to simultaneously achieve three outcomes this  quarter; they worked to rapidly grow liquidity for hundreds of different token pairs, provide a  robust decentralized option for swapping between tokens, and stood to benefit a broader  community of individuals that add liquidity to an exchange by rewarding them with new  governance tokens. These new tokens — think of them as economic participation or voting  rights in some cases — are an important invention unique to Ethereum. For example, users that  deposit USDC into Curve get cUSDC in return, which accrues value over time as the user  collects trading fees. The success of AMMs in Q3 proved that AMMs were ready for the  mainstream — so much so that the total value of AMMs on Ethereum surpassed $4 billion.  Instead of Wall Street market makers or centralized cryptocurrency exchanges collecting the  lion’s share of trading fees, AMMs provided returns and voting rights to anyone willing to add  liquidity to a contract, audited or not. When before has a borrower earned a return on a debt  from their lender?

The trend: Following the release of Compound Finance’s $COMP token in Q2, we expected Q3  to continue the proliferation of governance token launches. We also expected these launches to  be used in part for incentivizing liquidity in DeFi protocols and to give power to token holders to  vote on changes to the protocol designs. Yield farming, a new concept in Q3, can be described  as a way of seeking the most reward for putting various Ethereum assets to work. Each  employing different strategies and experiencing varying degrees of success, we saw $BAL,  $CRV, $UNI, $YFI, and others launching in Q3.

The importance: The incentive of yield farming to generate governance tokens both instigated  and leveraged some of the more unique properties of Ethereum. As yield farmers moved  liquidity into different pools to earn yield, a strong speculative DeFi bull market created rapid,  high demand for new types of governance tokens and pushed the gas costs of Ethereum to all time highs. Similarly, governance tokens like Uniswap’s $UNI introduced a new model for  launching by giving $UNI tokens to each Ethereum account that had previously interacted with  the protocol 400. While the summer created a frenzied rise and fall of different yield  opportunities, we predict that these new inventions for rewarding individuals who provide  liquidity to stick around. This is especially likely as user experience improves, key management  becomes more decentralized, and individuals providing liquidity can earn more attractive  interest rates than a bank account or legacy asset.

Forks, Derivatives, and a Growing Network

The trend: This quarter was also not without a host of forks, copycats, and (most importantly)  meme-based tokens attempting to capitalize on the popularity of AMMs and yield farming.  SushiSwap and CREAM launched as forks of Uniswap and Compound. The details and data  surrounding these forks brought to light how network effects, community popularity, and even  the very nature of open source software are unique to DeFi.

The importance: The potential ability for anyone to fork and duplicate open source code has  long been a concern and subject of game-theoretical analysis in the Ethereum and DeFi  communities. The argument against perceived downsides of public code has been the resilience  of network effects, which theoretically serve as protection against a protocol suddenly losing all  its users to an identical competitor. SushiSwap launched as a fork of Uniswap, and CREAM  launched as a fork of Compound. In some cases, these forks have provided new mathematical  models for protecting against impermanent loss and slippage on trading pairs. Their differing  degrees of success have, however, highlighted the negative side effects that have left some  creators and network participants feeling burned. This opens up a critical discussion and  generates questions about the legitimacy of anonymous token founders and more broadly,  questions the ethics of using imitative code for personal gain.

The trend: In addition to the creation of financial protocols, DeFi began to incorporate memetic  internet culture into the lexicon. Speculation resulting from interest rate maximization (i.e., yield  farming) was largely driven by conversations on social media and chat channels like Twitter,  Telegram, and Discord. It is impossible to overstate the breakneck pace of DeFi activity in Q3  and the role of these social channels in driving much of it. Of particular note is the concept of  ‘Weird Twitter’: a subset of social media filled with absurdist humor and Internet subculture. This  approach spilled over to DeFi, as projects like Based.Money and Meme Protocol (“Don’t Buy  $MEME”) grew in popularity with crypto influencers. Speculators themselves began to call  themselves “degen” investors, taking very high-risk bets on anonymous new forks and protocols  and exposing themselves to 1000% returns as well as scams and large losses, or “rug pulls.”

Jordan Lyall of ConsenSys posted a DeFi project generator image on Twitter as a joke and  inadvertently kickstarted the Meme Protocol which has a market cap over $5 million less than 3  months later.

The importance: While the trend may seem absurd, we note that Internet culture and crypto  assets have long been linked, both in terms of economic philosophy, as well as community  distribution. As investors began to see financial activity as a game, the outcome created  protocols that combined money with visual images and self-referential humor. This in turn led to  the creation of projects that used financial mechanics such as collateralizing assets for a

synthetic return in order to earn collectible social assets, like images, cards, and other non fungible tokens. As a result, crypto art tokens known as non-fungible tokens or NFTs (ERC-721,  ERC-1155) started to meaningfully grow and be attached to protocols with large financial  volumes. Crypto art and collectibles marketplaces like Rarible and OpenSea have seen  increasing purchasing volume in Q3. Personal and social tokens have also flourished via  projects like Roll and Async Art.

James Beck manages corporate communications, consumer product PR, and Eth2 marketing at ConsenSys. He has ghost-written commentary and articles for ConsenSys executives that have appeared in Wired, Quartz, and other industry publications. James is passionate about the increasing crossover between non-fungible tokens and art, as well as web3 models for collectives savings accounts like susus. Get in touch with James.