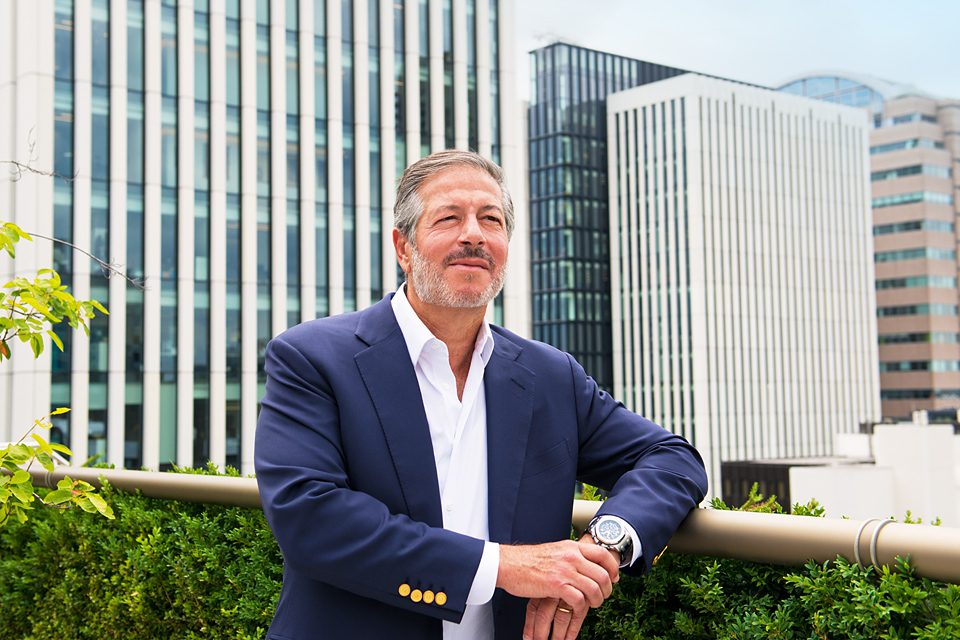 While researching Lee Olesky, the co-founder and chief executive of the fixed-income market platform Tradeweb, I came across an article comparing him to Amazon’s founder Jeff Bezos.

Both started their companies in the nineties. Both set out to use the internet and ecommerce to disrupt their respective industries at a time when the idea of buying things online was an alien concept. And both businesses have proven successful – volume on Tradeweb reached $100 trillion last year, and all of us have likely bought something from Amazon.

It’s a comparison that Olesky is not unfamiliar with.

“We came from the same era of innovation,” he says. “Obviously Amazon is a vastly bigger business, but we share the same concept – using electronic commerce to make the process of searching and finding whatever it is you want to do more efficient and streamlined.

“I guess our mistake was focusing on the bond market instead of everything else,” he jokes.

Tradeweb enables people to buy and sell bonds, derivatives, and other financial instruments electronically. It’s used by a number of different types of institutional investor, such as asset managers, insurance firms, and central banks.

Olesky set up the company in 1996, and it launched its first online marketplace for US Treasuries two years later. Since then, it has grown massively: according to its first quarter results, the volume of daily trades averaged $646bn, and the business generated revenue of $186m.

Bringing markets into the 21st century

More importantly, Tradeweb is at the forefront of modernising the $50 trillion fixed income market, as remarkably much of it is still phone-based. Traders still need to pick up a phone, call several banks and institutions to get a price, find a buyer or seller, and organise the trade over the line.

Tradeweb provides an electronic, internet-based alternative to that traditional model – although getting people used to the idea of online trading was a challenge when Olesky started the business.

“We were the first company to use the internet to trade electronically in financial instruments back in the nineties. That was a big decision, to actually even use the internet. I know that’s very hard for people to believe right now, but there was no one doing that at the time.”

Read more: Tradeweb reveals how markets have evolved over the past 20 years

The fact that so many traders in the fixed income space still rely on phones, rather than using electronic systems like Tradeweb to quickly find the other side of a trade, means that even after 20 years there is still plenty of opportunity for the company.

“We’re pretty fortunate that the space we’re in – applying technology to financial markets – has a tremendous amount of room to grow. The markets trade $4 trillion a day. These are huge markets, but they are still not electronic, so there’s still an opportunity to continue to move markets into a digital format.”

When I speak to Olesky, the company is celebrating two major milestones.

The first, and most important, is that Tradeweb has recently completed a successful listing on the US stock market in April. It raised $1.1bn in one of the largest US initial public offerings of the year, and it has proven a hit with the market: the share price has risen from $27 at the IPO to around $49.50 this week, valuing the company at $11bn.

But after more than 20 years as a private company, why was 2019 the year to IPO?

“We’d gotten to a point with the size of the company that it really suited us best to be a public company,” explained Olesky.

“And also it lined up with our corporate strategy. We wanted to streamline our governance process as a fintech company, create the right incentive scheme for employees – both to retain and attract people – and reward people who’ve been around with me since the early stages 20 years ago.”

Obviously, switching from a private to a public company comes with several new requirements, not least the need to produce earnings reports every quarter, and being held to account by more shareholders than before. However, Olesky doesn’t foresee these demands becoming a problem.

“There’s a certain amount of adjustment that you make in terms of what you’re disclosing publicly and regulation, that sort of thing: meeting with investors and analysts; being a little bit more outward-facing with respect to information and the media. But generally speaking, we continue to run the company in the way that we’ve been running the company.”

The other milestone is that July marks the two-year anniversary since China liberalised its interbank bond market to open the door to foreign money. Tradeweb was the first offshore provider to link to the market, enabling investors around the world to buy and sell Chinese government and corporate bonds, and so far $280bn in total volume has been traded on its platform.

There’s room for massive growth in this market, as only about two per cent of China’s domestic debt is held by overseas investors.

“It’s a huge market. By some measures, it’s the second largest bond market in the world,” says Olesky.

“There’s a tremendous amount of room once things happen both inside and outside of China that will grow the activity in the Chinese bond market, so Tradeweb finds itself in a really terrific position.”

Overall, Olesky is confident about the future of the business. As well as continuing the process of making existing markets more electronic, there are new ones to build like in China.

He also talks about upgrading Tradeweb’s systems to make it faster and more efficient for users looking to make a trade. And then there’s the scope for using new technology, like artificial intelligence and machine-learning algorithms.

“We’ve given clients the tools to automate the process through some very basic machine learning and rules-based algorithms,” he explains. “Those allow clients to program trading activity, based on what their needs are.”

So is Lee Olesky the Jeff Bezos of finance? In terms of being innovative and forward-thinking, then yes, that seems a fair comparison to me.