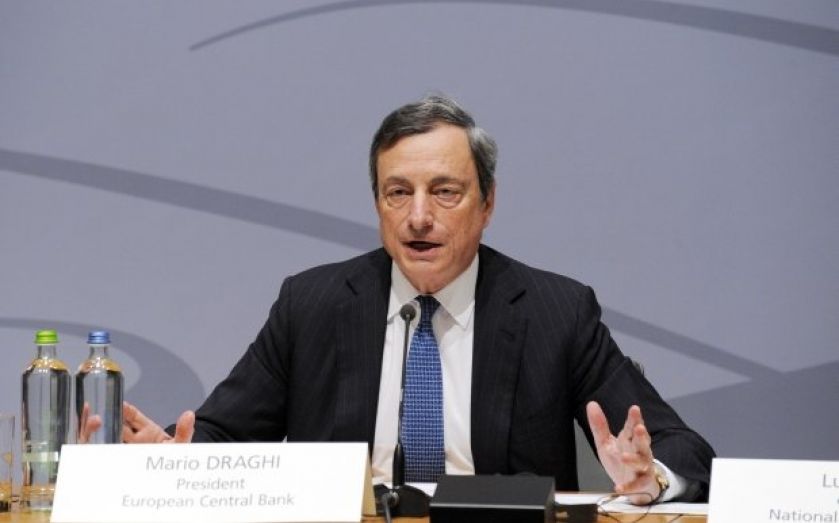 Last month, European Central Bank president Mario Draghi uttered one line that has traders convinced that we're in for something big this Thursday.

Members of the ECB's governing council were "comfortable with acting next time", said Draghi. And you might not think it, but for central bank watchers, that language is refreshingly clear.

So it would be a huge surprise to see the ECB announce nothing new tomorrow. What could we see?

Clients of Japanese investment bank Nomura are split. A recent survey sees 95 per cent of respondents expecting a cut to the ECB's refinancing rate, and 89 per cent seeing a cut in the deposit rate, sending it to negative levels.

34 per cent see another round of the long-term refinancing operation (LTRO), 32 per cent an extension of the fix-rate, full-allotment (FRFA) operations beyond their current mid-2015 limit, 28 per cent expect the ECB to end Securities Markets Programme (SMP) sterilisation, and 11 per cent expect a cut in the minimum reserve requirement.

Just 10 per cent expect some form of quantitative easing.

Marshall Gittler, head of global FX strategy at IronFX Global, is less than convinced about the impact that any of these steps will benefit the real economy. That leads Gittler to be concerned that the euro might actually strengthen against other currencies on Thursday, if investors judge the ECB's actions to be "too little, too late."

That doesn't rule out further policy loosening later in the year.

The ECB's refi rate is currently standing at 0.25 per cent, and a cut to it would reduce the borrowing costs of banks.

But cuts so far haven’t felt particularly potent. Societe Generale analysts note that November’s cut saw the euro returning to its pre-cut level against the dollar in just two weeks.

Moving into negative territory is widely expected here, with the deposit rate already at zero per cent. Negative rates might sound funny, but the Danish experience of them hasn't been too bad.

The deposit rate is that at which banks can hold funds at the ECB. Banks will be charged to hold money, which should make lending it out more attractive.

Similar to the Funding for Lending Scheme seen in the UK, another LTRO would reduce the cost of credit to banks, on the condition that those then get passed on to businesses.

In a note published by Credit Suisse research analysts this week, the bank made the case for this option, through its ability to "ease the drag of existing private sector debt – especially where it is high – on demand growth."

The ECB will currently lend a bank as much as it desires at a fixed rate for a given period of time, and it could chose to extend the time frame over which it is willing to do that.

French bank Credit Agricole see that as a "natural extension of previous policies".

Sterilisation is what the ECB calls the process by which it offsets the purchases of government bonds under its crisis-era SMP.

After buying up those bonds, the ECB goes back to the market to mop up the extra cash, selling an equal amount of instruments to the cash created.

And since 2010 it’s how the ECB been avoiding claims that it’s engaging in QE. Ending that sterilisation would release billions of euros.

The ECB’s reserve ratio is currently at one per cent. It could scrap or reduce that, releasing liquidity.

While those surveyed consider asset purchases the least likely weapon for the ECB to pick up on Thursday, it could also be one of its most powerful. Purchases work by reducing the returns on assets like bonds, making other activities more attractive to investors.

It’s something the ECB has stayed well clear of, largely because it’s politically unpopular with some key member states, and opponents have in the past suggested that the legality of asset purchases is unclear.

Societe Generale's Anatoli Annenkov thinks the ECB "will be ready to move on to a broad-based QE programme relatively soon."

Economists over at Morgan Stanley have modelled a hypothetical €1 trillion QE package, or 10 per cent of the currency bloc’s GDP. They would expect to see a 0.5 per cent rally in Bunds, a 10 per cent boost to equities, and a four per cent devaluation of the euro.

If such a programme was unveiled then Morgan Stanley would expect to see higher GDP and inflation from the third quarter of this year as a result.