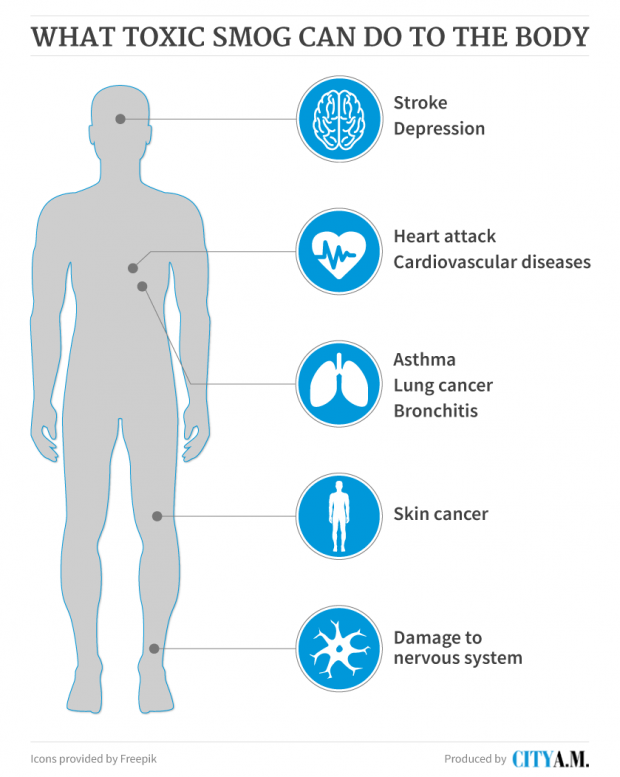 A thick smog has covered London and many other parts of the UK today, causing Britain to be placed on health alert.

According to the Department for Environment, Food and Rural Affairs (Defra), it is formed from a combination of home-grown smog and European air pollution. Areas affected include the south west, London, the south east, Midlands and the north.

Because of the still air and the high pressure, the pollution is building up and getting trapped in the atmosphere. It’s not here to stay, though – most of it is expected to have dissipated by tomorrow.

Experts have warned of a high risk to asthmatics, and advised the elderly and those with health problems to be careful.

But what are the health impacts, besides irritation of the respiratory system? This is just a spike in smog, so negative effects are unlikely unless you are already a sufferer of a disorder like asthma, but city pollution levels are growing worldwide, and long-term exposure to high concentrations of pollutants can lead to some serious problems.

There are a number of long-term and short-term effects high pollution exposure can have on the lungs, with ground-level ozone, nitrogen oxide and airborne particles being the main worries. They can lead to cells in the respiratory tract becoming more susceptible to cancer, as well as causing difficulty in breathing because of inflammation and scarring.

Pollution thickens the blood, raising the risk of blood clots and blocking arteries. If the problem becomes very severe, this can result in very high blood pressure and possibly even a heart attack.

Extremely small pollutants can get across the barrier between blood and brain, causing damage to the vital organ. Metals released during the burning of fossil fuels are among the molecules capable of doing this, and possible consequences include depression and stroke.

The skin absorbs environmental pollutants, which can be a trigger for disorders. Additionally, pollution has an indirect effect – it causes a broadening of a hole in the ozone layer, allowing more dangerous UV rays to shine through and cause skin cancer.

Carbon monoxide is one of the most dangerous air pollutants. It binds to haemoglobin, the blood’s oxygen-carrying molecule, 200 times more firmly than oxygen itself. Severe exposure can cause permanent damage to the nervous system.