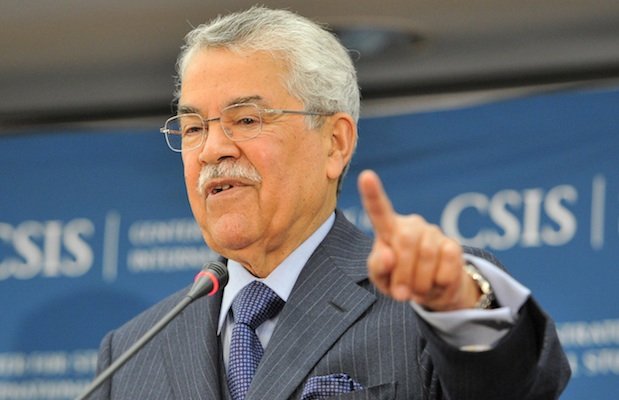 It'd be unlikely that the Organisation of the Petroleum Exporting Countries (Opec) doesn't freeze its output ceiling tomorrow. Speaking ahead of the cartel's meeting, Saudi oil minister Ali al-Naimi (pictured) told reporters today, "the market is in the best position it can be".

But a note from investment bank Citi warns that pressure will mount over the next year. Tensions, it says, will rise behind closed doors, even if comfortable prices make a cut unlikely (at pixel time, Brent is $112 per barrel (/bbl)) and Libyan production is still at a dribble.

The market will be well-supplied next year, but, says Citi, Opec will have its work cut out a) to move on from the supply disruptions of this year and b) in navigating the waters with a newly-emboldened Iran. Fresh from its nuclear deal, Iran will want "to take back some room for itself at the table, and prepare the stage for its hoped end to oil related sanctions in 6 months".

When it comes to production, Saudi Arabia has already started slowing things down (by 70,000 barrels per day (b/d) in September and 370,000 b/d in November), in line with their lower seasonal crude burn.

Given this forecast reduction, Saudi might have to cut more over the next year. It has two factors in its favour: an expansion in its own domestic refining capacity (so falling exports) and the growing disconnect between the West Texas Intermediate (WTI) and other oil benchmarks. Saudi has held crude flows to the US Golf Coast pretty stable, and this means that where Saudi sends its oil "may matter as much as how much it pumps for Brent and WTI prices".

Citi highlights that, in spite of waning pricing in the region, barrels have carried on flowing to the US unabated. "The 'stickiness' of US import flows-from Saudi Arabia… has been just one of the many surprises for the oil market this year." Moreover, says the bank, if it persists, "then it has significant implications for WTI and Brent pricing in 2014".

Citi has assumed another marked fall in crude import flows to the US net year, "leaving those same barrels to weigh on Brent and/or Dubai prices." But it adds that, "if the Saudis continue to push their crude into the US Golf Coast regardless of apparent economics, this could leave Light Louisiana Sweet (LLS), and hence WTI trading, under deep discounts to Brent, as is currently the case."