A London working week is typically associated with long hours, heavy workloads as well as demanding clients, but a report released this week by Centre for Cities has shown there are some perks to working in the big smoke.

Londoners are more likely to be in employment than their counterparts in large, medium and small city centres. At the same time, they're much more reliant on public transport such as tubes and buses, which gets tricky when they're super crowded or plagued by strikes.

Londoners are more likely to be in employment: 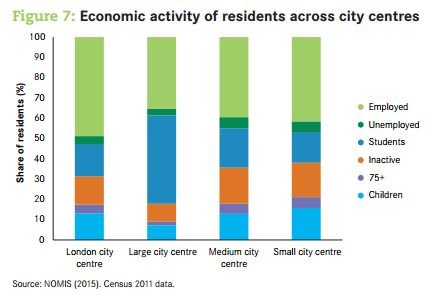 With finance and technology hiring set to create 145,000 new jobs in central London over the next decade and firms fighting for more office space, it's no surprise that the capital city offers good employment prospects.

And the jobs that Londoners do are pretty good, too.

"London in particular has the highest share of residents who are managers or senior officials, professionals or associate professionals (66 per cent)," the report said.

"City centres of small cities, on the other hand, have the highest share of residents working in lower skilled occupations – sales and customer service, process, plant and machine operatives, and elementary occupations (38 per cent)."

This might have something to do with the fact people who live in central London are a particularly brainy bunch with half holding degrees, compared to 37 per cent in large city centres, and 25 per cent in medium sized cities.

Methods of travel to work

There's no prizes for guessing this one – Londoners are more likely to use the underground, light rail or a bus. However, they're less likely to take a car or van, probably due to the long traffic queues and the high costs associated with running a vehicle in the capital.

"In city centres, less than a quarter commute by car or van, compared to just over a half in suburbs and two thirds in hinterlands," the report said.

"But these travel patterns are not uniform across all city centres. In London, just under a quarter of all journeys are made by underground, and eight percent are made by car."