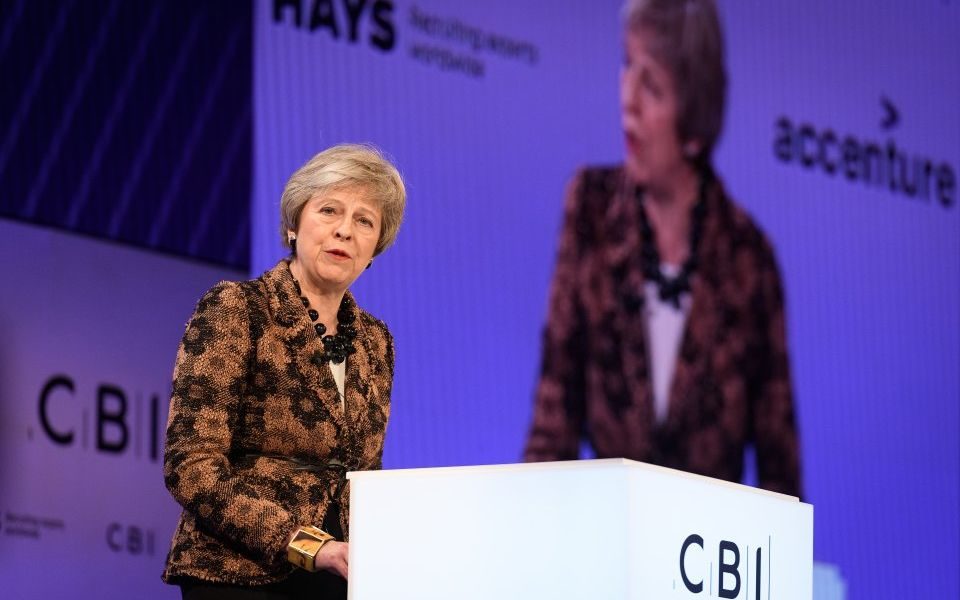 Theresa May has reaffirmed her commitment to taking the UK out of the EU transition period in time for the next scheduled general election in 2022.

Delivering a keynote speech at the Confederation of British Industry (CBI), May hinted that she would not let the transition period extend until the end of 2022.

The pound slipped following May's hint, and was down 0.2 per cent against the dollar.

The Brexit transition phase has been scheduled to run until the end of 2020 but EU chief negotiator Michel Barnier suggested over the weekend it could be extended to December 2022.

May said the withdrawal agreement she reached with the EU at the end of last week contained the option to extend the transition as an alternative to the Irish backstop.

"My view is that I don't want that to come into place," she said, adding that it was important for the UK to be out of the transition by the next general election.

The Prime Minister used her CBI speech to sell her deal which has attracted significant scrutiny from outside and within her own party.

Taking questions from the floor, May said the public shouldn't just listen to politicians but to businesses who "want a good deal". She said she was confident she could strike a deal with the EU at the next summit on 25 November that she could take back to the House of Commons.

The Prime Minister said her deal delivered on the result of the referendum by ending free movement, giving the UK control over how it spends its money, ending the jurisdiction of the European Court of Justice and taking the UK out of policies such as the common agricultural policy and common fisheries policy.

She said that although close alignment would remain with the EU it would not stop the UK from striking free trade deals with countries outside the bloc, and that the deal struck for services would offer more than any other trade deal in existence.

On immigration, May said that EU nationals will no longer be able to "jump the queue" ahead of skilled workers from outside the bloc.

"It will no longer be the case that EU nationals, regardless of the skills or experience they have to offer, can jump the queue ahead of engineers from Sydney or software developers from Delhi. Instead of a system based on where a person is from, we will have one that is built around the talents and skills a person has to offer," she said.

"It is not just a job for politicians: all of you must play your part too, by stepping up to demonstrate that you truly have a stake in the success of this country."

She said the best way to do that was to "invest in the future of the next generation" by helping them to develop their skills and start their career.

Responding to the Prime Minister’s speech, CBI director general Carolyn Fairbairn said: "The Prime Minister has opened the door for enterprise and government to work together and build a fairer and more competitive UK.

“Getting the right Brexit deal will dominate the coming weeks but we can’t afford to lose sight of the domestic agenda. At the heart of that is people. We need a focus on jobs, skills and investment."

She continued: “Future prosperity depends on getting the Brexit deal right. The overwhelming message from business is to make progress, don’t go backwards.

“We need frictionless trade, ambitious access for our world-beating services and a transition period which draws us back from the cliff edge. Anything less than that and jobs and investment could suffer.”