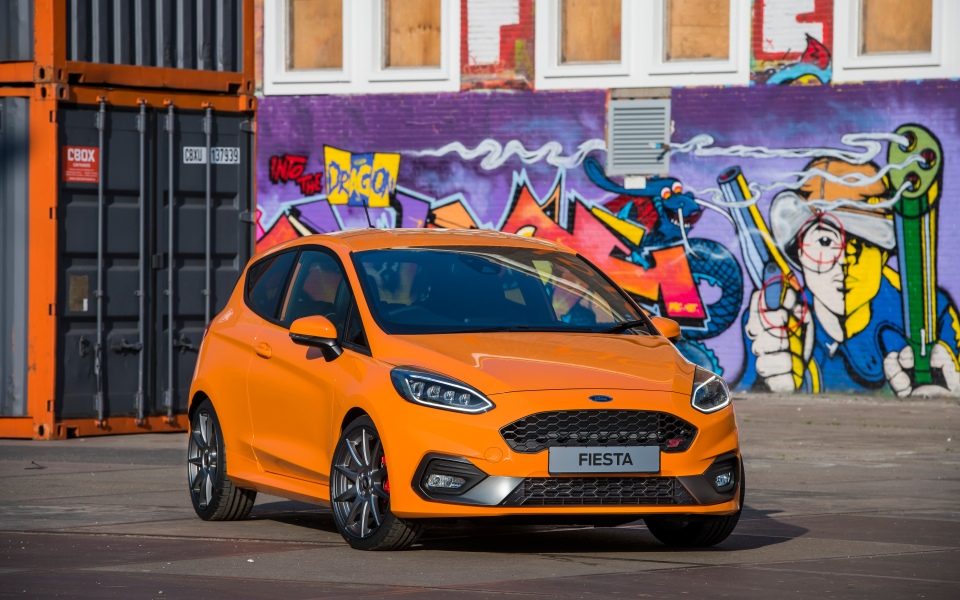 He can’t afford a Rolls or a Bentley, he has to buy a second-hand Ford,” sang Ray Davies of The Kinks in 1969.

In such company, the new Fiesta ST Performance Edition looks good value at £26,495. That’s some £4,000 more expensive than a fully-loaded ST-3, however, and a whopping £7,000 more than the entry-level ST-1. It also forces the car into contention with hot hatchbacks from the class above, such as the Hyundai i30N and Renault Megane RS 280.  So, what makes this pocket rocket special – and is it worth the money?

You’ll spot the Deep Orange paint first. It’s compulsory on the Performance Edition, and even more dazzlingly day-glo than the Orange Fury hue on the Focus ST. New 18-inch, 10-spoke alloys are more subtle, and save nearly 2kg of unsprung weight per corner. The car also sits closer to the Tarmac – 15mm at the front and 10mm at the rear – thanks to Ford Performance adjustable coilover suspension. My mother thought it gaudy, while my 16-year-old nephew said it looked “sick”. Which is probably as it should be.

Read more: The Bentley Bentayga Speed is officially the fastest SUV on sale. But should you buy one?

The feistiest Fiesta also comes with the Performance Pack: usually £925 even on the ST-3. It comprises a Quaife limited-slip differential to haul the car around bends, launch control for those all-important traffic light getaways, plus shift lights to help you grab the next gear. More prosaically, you get all the equipment that comes as standard on the ST-3, including LED headlights, navigation, heated seats, heated steering wheel and a reversing camera.

So far, so good, but these upgrades aren’t bolstered by extra power. The Performance Edition shares its 1.5-litre petrol engine and six-speed manual ’box with the regular ST. That means 200hp, 0-62mph in 6.5 seconds and 144mph flat-out, plus impressive 40.4mpg economy: the latter boosted by clever tech that deactivates one of the engine’s three cylinders under light loads. The transition – from GTI worrier to eco warrior – is utterly seamless.

You’ll be having waaaaay too much fun to worry about miles per gallon, though. The Fiesta ST is a LOL emoji on wheels, an intravenous sugar-hit of alert steering, instant turn-in and terrier-like tenacity in corners. Push hard and it maintains a neutral, throttle-adjustable balance that’s rare in a front-driven car. Switching into Sport or Race modes makes things still more intense, with pops and fizzes from the twin tailpipes.

If you’re worried the coilover suspension has ruined the ride, don’t be. There are 12 bump and 16 rebound settings to tinker with, but the standard set-up is supple enough for every day. It’s firm, but rarely harsh – like tightly clenched fists gripping bicycle handlebars. And the sheer lack of inertia is just joyful. Even at slow speeds, the ST feels alive to every input.

Me? I’d save the cash and go for an ST-3. The orange is a tad look-at-me for my liking and the Performance Edition only comes with three doors: not ideal when you have kids. Then again, this one-of-600 flagship will be the one fetishised by fast Ford anoraks, meaning a potential payday in years to come. If it follows the same trajectory as that Escort RS Turbo, it will be worth £187,584 in 2049. Now there’s food for thought.