The emerging hipster capital of Germany, Leipzig's history is rooted in revolution 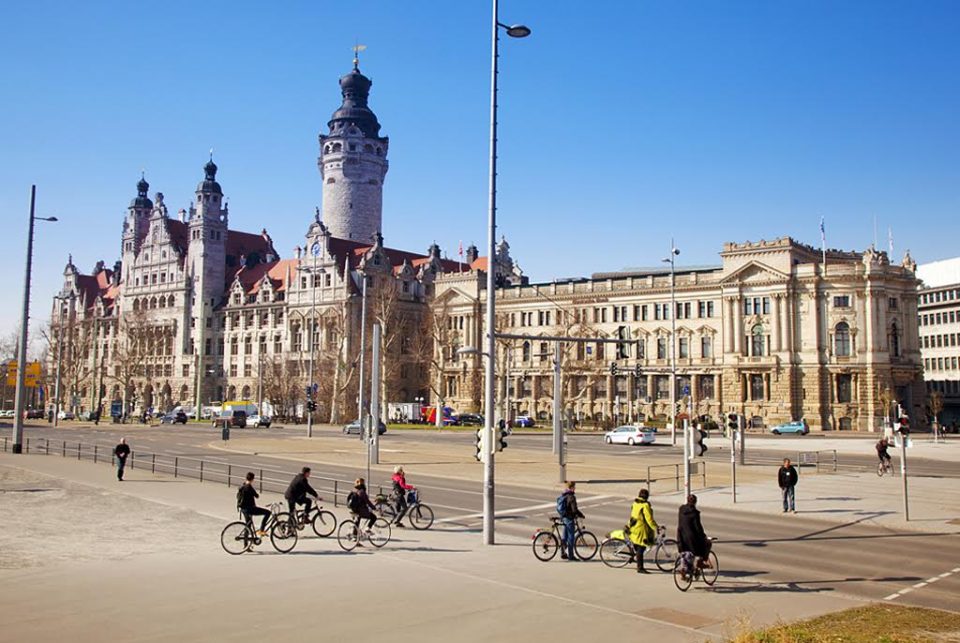 Look down on the quietly affluent pedestrianised streets of central Leipzig from the unparalleled heights of the Panorama Tower, and you would probably never guess that this is a city where the death knell was rung on the Cold War division of Germany. But this year Leipzig commemorates 30 years since a series of demonstrations called the Peaceful Revolution that were instrumental in bringing down the Berlin Wall.

The division of Germany into East and West at the beginning of the Cold War was not kind to Saxony’s largest city. At the collapse of the communist eastern bloc in November 1989, many of the city centre’s most significant buildings lay abandoned and in ruins, a harsh reality for a region with an incredible 15,000 buildings protected by historical preservation orders.

Standing in front of the elegant shop windows of Nikolaistrasse, one of the city’s main shopping streets, my guide Birgit shows me images of what the same structures looked like back in 1989, when Leipzig still lay firmly in the GDR, as East Germany was officially known. There’s barely a roof, let alone a window, in sight amid façades cut back to their reinforced steel and bare brickwork.

The market stalls that throng with fresh produce are a far cry from what was available in the GDR, when the government-controlled stores only stocked bananas once a year, just before Christmas.

It makes the city’s post-reunification turn-around into a hip hangout for creatives and those in the hi-tech industries all the more of a surprise. It’s now home to the Museum of Fine Arts (MdBK), the biggest new museum to be constructed in east Germany since 1945, while I’ve just missed a huge esports event at Leipzig Trade Fair. It has also led to Leipzig being called ‘the new Berlin’ by some, and by the more unkindly moniker of ‘Hypezig’ by others. But whichever side of the argument you stand on, it’s hard not to be impressed by the city’s twenty-first century credentials.

The bustling high street, and market stalls that throng with fresh produce on the square outside the Altes Rathaus (Old Town Hall), are a far cry from what was available in the GDR, when the government-controlled stores only stocked bananas once a year – just before Christmas.

The cuisine of the period can be sampled more widely with the German-only menu at Gaststätte Kollektiv, one of the many restaurants on Karl-Liebknecht-Strasse, known more commonly as KarLi Street. Stretching south from the art nouveau stylings of the New Town Hall, it’s a thoroughfare dotted with street art, thrift stores, and a bohemian, youthful crowd too young to have experienced the period needlecraft tablecloths, vintage cocktail trolley, and authentic, homely, food (including pork schnitzel the size of dinner plates, and lamb goulash with beans and bacon) the first time around.

“I came to Leipzig in 1978,” Birgit tells me. “After nearly 30 years of the GDR it was dirty and grey. Life was boring,” she goes on. “We had a guaranteed job, and didn’t have to work that hard, but it took me ten years for permission to get my own apartment. You would have to wait 15-18 years for a car – and then it would be a Trabant,” a car long the butt of jokes even in East Germany.

“The smell of the 1970s and 80s still upsets me,” she says as we enter the Runde Ecke (Round Corner) Stasi Museum. She looks for herself in the many enlarged black and white photographs on display: vast crowds surrounded by huge numbers of police weighted down with riot gear and spoiling for a fight. “When people ask me what we felt when the Peaceful Revolution started, I tell them – it was fear. We didn’t know how it would end.” Demonstrators like Birgit had reason to worry; a similar uprising in 1953 was crushed by Russian tanks.

Read more: Bruce Springsteen turned 70 this year. We visit the downbeat seaside town in New Jersey made famous by the Boss…

The former regional headquarters of the not-so-secret secret police, the Runde Ecke contains 40,000 exhibits. It’s the only place in the former GDR where you can find rooms exactly as they were left at the fall of the Berlin Wall, a fact solely down to the heroics of a small band of ordinary citizens who occupied the building when the Peaceful Revolution unfolded.

“It was a very German revolution,” Tobias, who at the age of 23 was a leading player in the protest movement, says smiling. “We signed a contract with the Stasi that they wouldn’t destroy any more files than they had already.” The Stasi employed one in every 200 people in the city, with paid and unpaid informants enhancing the organisation’s information gathering a further four-fold. Ten kilometres of documentation were recovered, alongside a large library of private conversations recorded onto cassette tapes, and another of clear glass jars trapping the scent of Leipzigers blacklisted by the Stasi.

“People used to cross the street rather than walk directly past the Runde Ecke,” says Tobias. A bank of period CCTV cameras has been left in place, in front of the main entrance on the city’s inner ring road. “But every time we passed the Runde Ecke [as demonstrators] we’d get louder in voice”.

By early October 1989 the demonstrations had ballooned, from a few hundred protestors a couple of months before, to half the city’s total population of 500,000. The stunning neoclassical interior of the 850-year-old Church of St Nicholas was the centre of the protests. They had become a demand for greater basic rights, such as the freedom to travel abroad, as the Sites of the Peaceful Revolution walking route testifies. Protestors began to carry placards emblazoned with the words ‘Wir sind das Volk’: ‘We are the people’, and candles to brighten the dark autumn Monday evenings when they occurred.

“Elections were a farce,” says Irmtraut, Tobias’ mother. There was only one party to vote for, and that was the hard-line SED; the German communist party. She refused to take part even when men in dark coats turned up at her door. Playing down here own involvement she says “I was too scared to demonstrate. People should be thankful to those young people who did.” Demonstrations sprang up right across the GDR in response, with the Berlin Wall only lasting a further month.

Every evening, 144 individual cubes of light comprising an art installation in the cobbles outside St Nicholas’ Church randomly light up in turn, marking the role of ordinary individuals in the protests. Each October also sees the city celebrate its annual Festival of Light. Now in its tenth year, it always begins like the Peaceful Revolution did in October 1989, with songs and prayers at St Nicholas’. Festival-goers then take to the inner ring road and gather at Augustusplatz, at the foot of the Panorama Tower, for a night of audio, video, and light installations commemorating the revolution and its role in the fall of the Berlin Wall.

There are no direct UK flights to Leipzig, however ICE trains take just 1.5 hours from Berlin. The £11 Leipzig Card provides free public transport and Runde Ecke Stasi Museum entry, and reduced-price entry to the Museum of Fine Arts.