In search of India's Silk Road, the centuries-old trading route crossing the Himalayas 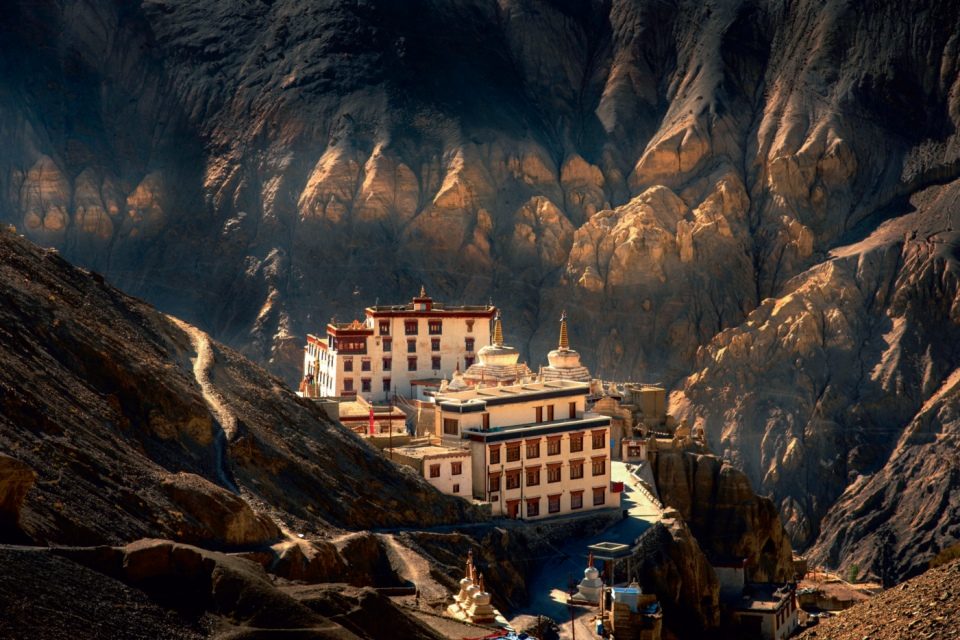 Standing on top of Khardung La, I was higher than I’d ever been without flying. An enterprising clutch of soldiers had set up the world’s highest tea shop, and as a brisk wind blew across the Himalayan peaks, I was grateful for the steaming cup of chai in my hand. A group of bikers were looking decidedly green around the gills having ascended the pass too quickly – given we were at more than 17,500 feet and the air was thin, that shouldn’t come as a surprise.

We were all marooned here together, Bollywood pop blaring from a speaker among the streaming rainbow of prayer flags, waiting for the next explosion. It came as an almighty bang, then a thunderous rumble as rocks poured in an avalanche down the mountainside. Ladakh is seismically active, and the Indian Army deliberately dynamites loose cliffs, then bulldozes the resulting rock falls, in order to keep the road open.

Ladakh might feel so remote as to be another world, valleys cut off completely for much of the year, but it’s a place of great strategic importance. Both India and Pakistan claim the Siachen Glacier, which also spreads towards the Chinese border. Ladakh was always the crossroads through the Himalayas, a vital route for trade and the spread of ideas as well as a gateway for rulers with conquest on their mind.

My interest on this journey was not contemporary geopolitics, but the vestiges of the ancient Silk Road. I’d assumed evidence of the intercontinental trading caravans would be long gone, but as the railways never penetrated this far into the Himalayas, and the borders only solidified in 1948, for some people it’s still within living memory.

The caravanserai still stands in Kargil, and the nearby Munshi Aziz Bhat Museum explores the history of trade with Central Asia and British India. In the galleries are textiles, armour and weaponry, coins, and — in a poignant reminder of how recently the trade continued — even prized household objects such as early 20th century toiletries made by Colgate and Pear’s. Leh, formerly the royal capital of Ladakh, also boasts a Central Asia Museum in the Old Town, though the primary focus here is to explore cultural and economic ties with Buddhist Tibet rather than the Muslim ‘Stans.

Read more: Bruce Springsteen turned 70 this year. We visit the downbeat seaside town in New Jersey made famous by the Boss…

The trading wealth of Ladakh was not spent on grand mansions; palaces survive in Leh and Shey, but they were functional, heavily fortified structures rather than opulent pleasure palaces. Their mudbrick architecture has weathered well in Ladakh’s high altitude desert climate, though the modern pressures of urbanisation are inevitably taking their toll, especially in Leh’s Old Town.

Instead, Ladakh’s treasures — spiritual and physical — are preserved in the Buddhist gompas which punctuate the arid mountain landscape and dominate the skyline above even modest villages. In design, they are very much like the monasteries of Tibet and Bhutan, another reminder of the region’s historic cultural links.

Buddhism took root in Ladakh more than 2,300 years ago when India’s Emperor Asoka sent his missionary here. The earliest Buddhist carvings are in a cave at Sani, and in roadside petroglyphs and relief carvings at Khalatse, Mulbek, and Khartse Khar.

Even today, there’s no way to travel fast, and so any journey in Ladakh takes on the spiritual aura of a pilgrimage

The Buddhist chanting of Ladakh — which you can still hear early in the morning in many of the monasteries — is recognised by UNESCO as part of the world’s Intangible Cultural Heritage, and the red robed monks are omnipresent against the grey-brown mountain backdrop. When the Dalai Lama comes to preach, the crowds are of biblical proportions, and many Tibetan exiles have made their new homes in Ladakh’s villages and towns.

Foreign tourists have only been allowed to enter Ladakh since 1974, and in the 45 years since, tourism development has been erratic. This is in part due to the region’s inaccessibility but also because the state of Jammu and Kashmir in which it lies has always had an uneasy relationship with Delhi, and thus received little state investment. Private investors are slowly coming in, recognising Ladakh’s potential, and every season the roads seem a little better, new hotels open their doors, and more tourists — domestic and foreign — come to spend their rupees.

One of the biggest signs of development is that for the first time there are luxury places to stay. Guesthouses are well represented, and Leh has some reasonable mid range hotels, but these understandably never quite ticked the boxes for visitors who wanted to enjoy the wild landscapes and rich culture of Ladakh, but to do so with a certain level of comfort.

This summer, the ultraluxe Chamba Camp has pitched its tents in both Thiksey and Diskit, beside two of the most important monasteries in Ladakh. Inspired by the best safari camps in Africa — or perhaps the travelling camps of an Indian maharaja — both camps sit by the river, their respective monasteries and mountain peaks rising up behind.

Foreign tourists have only been allowed to enter Ladakh since 1974, and in the 45 years since, tourism development has been erratic.

In Thiksey, I rose before dawn to join the Yellow Hat monks in their 7am prayers. The temple is pretty dark, but in the flickering light of the butter candles you can just about make out the monks’ intense looks of concentration. The dancing shadows on the mural covered walls reminded me of a shadow puppet show, and the periodic chiming of bells mixed with the monotone chanting made the hairs on my neck stand on end. Nothing about this experience has been laid on for tourists; the monks are simply repeating the same ritual that they and their many generations of predecessors have done day in, day out for 600 years.

I ate breakfast at Chamba Camp and then returned to the monastery to appreciate it in the full light of day. Monks were circumambulating the sacred chortens (small stupas containing relics) and prayer wheels, spinning the latter as they walked. I climbed a staircase to come face to face with the 49 foot high statue of the Maitreya Buddha, the stare on his golden face looking straight through me. It’s unusual to find a Buddha statue in Ladakh seated like this one in the lotus position; more often the Buddha is presented regally on a throne.

Mother Nature has always dictated the paths along which one might travel in Ladakh; I followed the contours of the rivers and the passes between cloud-kissed peaks. There is no sense that mankind has ever tamed this place, but still we have left our marks. The rock cut Buddhas and the lines of chortens showed the way to Silk Road travellers past, and to those of us who have followed on to see firsthand where and how their faiths, art, trade goods, and DNA spread. Even today, there’s no way to travel fast, and so any journey in Ladakh takes on the spiritual aura of a pilgrimage: it’s one you should embark upon yourself, should you get the chance.

Journeysmiths (journeysmiths.co.uk; 01604 637 332) offers a seven night stay at Chamba Camp, including international and domestic flights, from £5,879 per person.