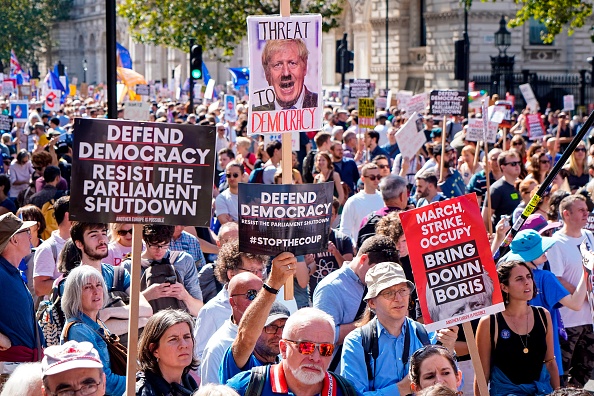 Never ones to shy away from controversy, Britain’s venerable BBC has recently decided to tantalise viewers of its new documentary, Rise of the Nazis, with the suggestion that something similarly awry might be occurring in the UK today.

The BBC’s own media centre touts the contemporary relevance of the programme as being “a timely look at the fragility of democracy” in a political climate that is “dominated by concerns about the rise of populism, nationalism and disunity”.

And just in case anyone needed further smacking around the head with such messaging, the second episode opened with:

“It’s January 1933. And Germany has a new Chancellor. He refuses to engage in the boring day-to-day detail of running a country. He has no interest in the opinions of experts and refuses to read briefings. Instead, he tasks his team with a simple assignment. Destroy democracy, and make him dictator.

The inference of all these winks and nudges is obvious. According to this narrative, actions such as the proroguing of parliament, potential non-compliance with Brexit extension terms, and the stripping of the whip from 21 Conservative MPs are somehow analogous to the burning of the Reichstag, the Enabling Act, and the Night of the Long Knives.

The message is clear: democracy as we know it is in danger. And this Prime Minister seeks to subvert it so he can secure his aim of a Thousand Year Reich. Sorry, a no-deal Brexit.

It is difficult to overstate the offensiveness of this comparison. But if anything signals the utter degradation of our political discourse and institutions in the Brexit period, it is a theory that likens the rise to power of one of history’s greatest monsters to the Johnson premiership.

Britain in 2019 may be many things, but it is not about to slip into a far-right dictatorship. Boris Johnson is a social liberal, not a homicidal racist. Parliament is prorogued on a regular basis by governments of all stripes.

Governments do not engage in wanton acts of illegality – as opposed to actions which they have solid legal opinions for that may dissent from the popular imagination – but if they do, our legal system will resolve them. MPs who defy their party whip on a matter deemed to be one of confidence know the time-honoured risk they are taking.

These things are so obvious that it is astonishing to have to reiterate them. Yet sadly, we appear to live in such times where the obvious is deliberately obfuscated, with chaos and confusion being maleficently sown instead.

The ultimate example of this has occurred twice in the past week.

The very man who is accused of being a putative dictator is the one who has offered a General Election so that the people of this country can decide their future in a democratic fashion.

This opportunity has been spurned by the forces of his establishment opponents, who are determined to forbid the idea of a no-deal Brexit ever coming near a ballot box.

There is a profound irony in all of this. Those who have shouted loudest about a Johnsonian coup are the ones who have arrogated power for themselves over what the people may – or may not – vote for, citing that they know best.

It is of course MPs’ right to make the decisions which they feel are appropriate, but they should bear in mind the lessons of history when they do so wilfully.

Which brings us back to the BBC’s documentary about Nazism. For it turns out that there is at least one valid comparison to be made between the chaos of the Weimar years and what may yet unfold in British democracy. And that is this: nature abhors a vacuum.

One of the most important enablers for the Nazi seizure of power was the essential collapse of the Weimar political system in the wake of the Great Depression. Rival mainstream politicians proved unable to work together in the national interest to counter the crisis Germany faced, instead preferring to undermine each other to secure narrow partisan or personal gain.

With each passing year of parliamentary deadlock, the extremes of politics – which promised a solution rather than more of the same – became more attractive to an increasingly desperate electorate willing to countenance anything to end their misery.

As a consequence, the political mainstream was swept aside, rendered irrelevant by its own failure to resolve a situation that it had over three years to control.

Britain in 2019 is not Germany in 1933. Mercifully, there is no Hitler on the horizon. Nor are there any of the analogous situations – like economic ruin and a breakdown of law and order – that so bedevilled the late Weimar period.

But on one thing we can be certain. The patience of the people – even in a long-established democracy – is not infinite. If the political mainstream succeeds in only frustrating change rather than delivering it, history teaches us that it will eventually be swept away.