Talks are going to the wire, but unless something miraculous happens, London is staring down the barrel of a double-whammy of strike action this week.
As it stands Tube staff members of RMT, TSSA and Unite are planning to walk out from 6:30pm on Tuesday and for the whole of the following day (25 to 26 August). They will then repeat this on the Thursday and Friday (27 to 28 August). Tube drivers union Aslef is not participating, which means the action could be less severe than it was last time around; however it is still expected to be hugely disruptive.
All that means plenty of delays and a whole lot of extra time travelling – not forgetting the eye-watering cost to the economy of just one strike.
Whether you're being a diligent employee and allowing that to eat into your personal time off, or whether you're slightly more gung-ho about turning up late, TfL estimates that during February's strike those working in the capital “lost” a total of 3.48m hours.

Research carried out by City A.M. shows that based on the average weekly wage – which for full time employees in London is £660.50 – those lost man hours equate to a whopping £59.16m. A second strike in April would have cost the economy (or frustrated workers) around £54.4m.
Transport for London has been clear about what it is doing to mitigate that: as with the previous strike a further 250 buses will be deployed to keep the city moving, while all of TfL's other services – DLR, London Overground and such like – will be running as normal.
But just how far that will go in making commuters' journeys in any easier?
As you might have guessed, 250 extra buses is nowhere near enough. On an average day, more than 2.26m people use the Tube on an average weekday.
Assuming each extra bus is a double-decker, they can take 87 people before reaching full capacity.
That means TfL would need 1,368 buses doing a full route an hour each to cover just half the displaced Tube commuters – assuming the journeys are spread evenly across the whole 19 hours the Tube is open, which of course they wouldn't. 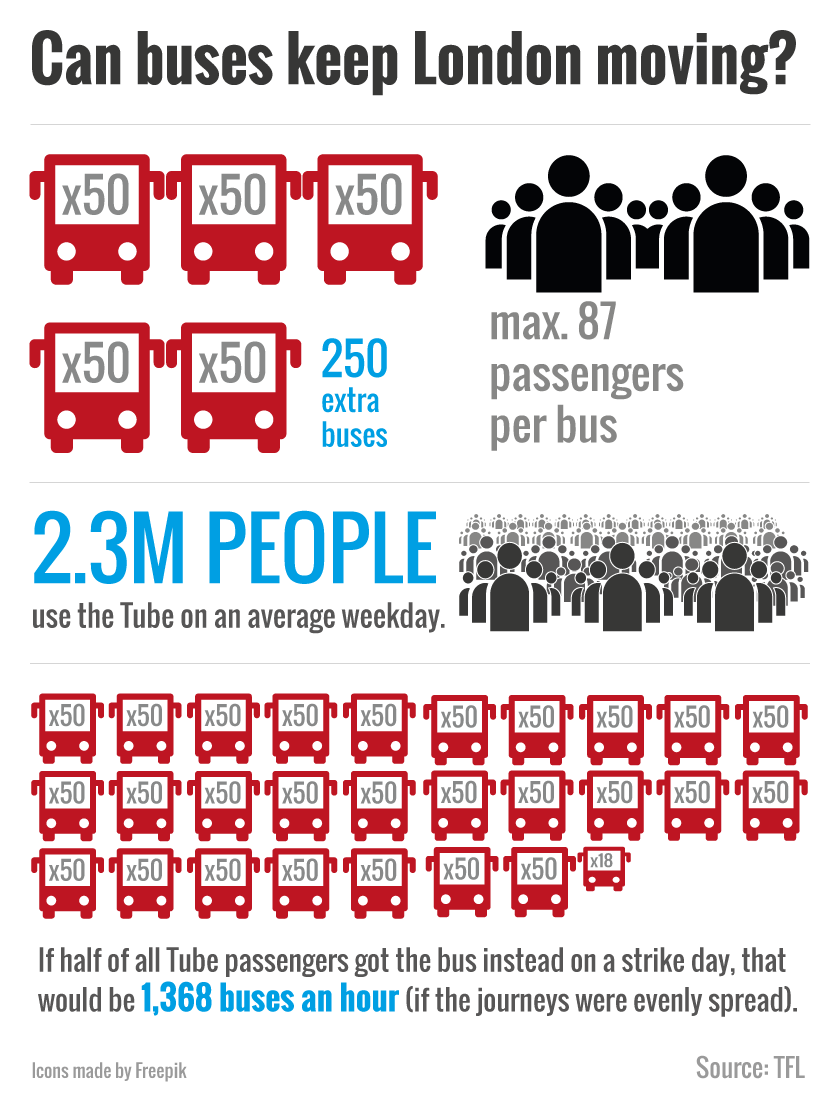