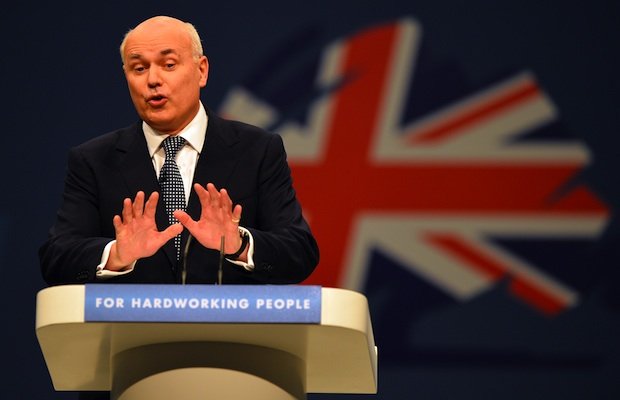 With the Autumn Statement within the hour, this morning was obviously an ideal time for Ian Duncan Smith to announce that his Universal Credit programme may be late (i.e. not finished by 2017).

The pear-shaped project has been lambasted for "alarmingly weak" management, frittering public money (to the sum of £140m) and a disastrous IT system which can't be used.

The work and pensions secretary said in an interview with the BBC this morning that the new system will "essentially" be completed by 2017, although this will still entail delayed transferring of claimants (who might well lose out), it may just "take a little longer".

When it comes to hitting its aim to get 184,000 claimants onto Universal Credit by April of next year, Duncan Smith declined to comment.

Last month, Margaret Hodge condemned the pilot programme for the scheme: "It does not deal with the key issues that universal credit must address: the volume of claims; their complexity; change in claimants' circumstances; and the need for claimants to meet conditions for continuing entitlement to benefit".

Unfortunately, something designed to heighten uniformity and efficiency could well be translating into a homogenised (and expensive) mess.

Hat tip to Guido for noticing that, despite what Duncan Smith has been saying, things haven't been running all that smoothly:

The warning signs were there when IDS said on 14 October: “Universal credit will roll out very well and it will be on time and within budget”. Or four days later, when he said : “Universal credit will roll out and deliver exactly as we said it would”. Well today the inevitable has happened, IDS says the roll out “may take a little longer” and the project might still be 700,000 shy of the target by 2017. If only there were some other major political event on today to deflect attention away. Still, at least Osborne will be chipper…