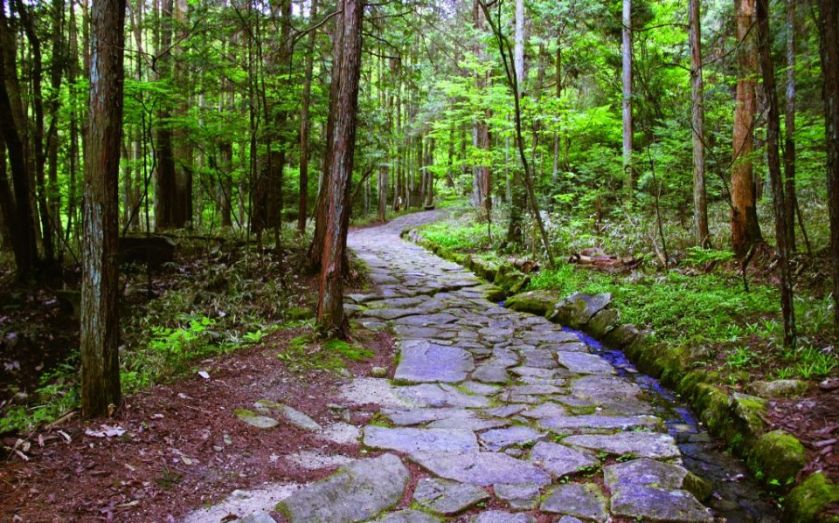 Japan’s sleek Shinkansen has been the country’s fastest mode of transport since it launched 50 years ago, its aerodynamic nose slicing through the rugged landscape. Before that, if you wanted to quickly traverse the country you would take the Nakasendo Way, one of five ancient highways built during the Edo period (1603-1868).

Winding through the heart of Japan’s main island of Honshu, the 500km road stretched from the imperial capital of Kyoto all the way to Tokyo (then known as Edo). It was considered the safest, most important highway after the Pacific coast’s Tokaido route, which the bullet train now hurtles along. But it was also the steepest, ascending over the mountains at Sekigahara, along ridges and through the plains of the Kiso valley. Nakasendo literally translates as “the path through the mountains”.

Today the highway, once bustling with feudal lords, samurais and merchants, is quiet and few people seem to have heard of it. Which is odd, because this time-worn trail provides one of the most scenic journeys through Japan, its castles, temples, traditional inns and teahouses offering a window into the past.
In October, I left the tourist-jammed streets of Kyoto and hopped on a train to take part in a hike organised by Walk Japan. The travel company was set up 23 years ago by university professors Tom Stanley and Dick Irving, who were researching the history of the Nakasendo. What started as a one-off trip with their students eventually mushroomed into a fully-fledged tour as more friends asked to come along. The company now provides dozens of treks around Japan, taking more adventurous travellers off the beaten track. The 11-day Nakasendo tour includes walks of up to 20km a day, with nights spent at traditional inns called minshuku, most of which have been run by the same family for hundreds of years.

A signpost showing the length of the Nakasendo way

I met up with my fellow travellers – five lively Australians and a family from Hong Kong – and our guide Miwa on the fifth day of the tour in Nakatsugawa, one of the largest postal towns – of which there are 69 – built along the Nakasendo way to provide food and shelter to weary travellers.
A large wooden “kosatsuba” – an old town noticeboard carved with edicts and laws (one warning people to denounce any covert Christians) – marked the start of the Nakasendo and it wasn’t long before we left signs of civilisation behind, the forest engulfing us. In Kyoto, the leaves had barely begun to change colour but here the foliage was already maturing into warmer hues, gradually building up to the riot of vermilion, orange, ochre, and golden leaves that I would see days later further north.

A museum at Tsumago

The road climbs steeply over undulating hills, crossing rice fields and hamlets boasting exquisite gardens with carefully-tended flowerbeds. Bright orange persimmons are hung out to dry so that they’re sweet in time for the winter. An old lady sits hunched outside her house, stripping soybeans from their pods. She looks up at us and nods her head before returning to her work.
Miwa, a US-born Japanese woman who gave up her government job in Tokyo to become a guide last year, is a walking encyclopedia. On the side of the path, she points to a small stone statue of the goddess kanon, “the horse-headed goddess of mercy” tasked with protecting travellers and horses on steep stretches of the road. Already out of breath, a divine push is just about what I need to climb up the last stretch of the road that takes us up over ridges and downhill again, the last of these offering a breathtaking view of the gorge below and a waterfall beyond it.

It’s late in the afternoon when we arrive at Sinchaya, a minshuku run by Hara Norizaku and his wife, who come out to greet us. It used to be a teahouse, its name meaning “the new” because it is a mere 250 years old. Minshuku are similar to ryokans, traditional high-end guesthouses, but without the frills and kimono-clad staff. The owners often live alongside the guests in these more humble lodgings, giving it a homely feel, like staying with a distant aunt. The tatami rooms are sparse, with a low square table at the centre and the bedding hidden away in the cupboard. After rolling out my futon, I change into my yukata (a Japanese dressing gown) and shuffle downstairs to soak in the scalding hot cedar-wood bath-tub, before supper.

The long table in the dining room is crammed with plates of all shapes and sizes. We sit on the floor – not an easy feat for some of the older members of the group – and say Itadakimasu, which roughly translates as “I humbly receive”, before tucking in. The family has prepared a feast of wild boar (hunted by the innkeeper), vegetable tempura, trout (try deboning fish with chopsticks) and rice farmed from their own paddy fields. There are even some crickets fried in soy sauce (which I wash down as quickly as possible with sake), probably caught that morning from their windowsill.
The next day, Hara-san and his wife wave good-bye until we have completely disappeared from sight and we walk on to the picturesque town of Magome. This is the most famous and well-visited of the postal towns on the Nakasendo, along with Tsumago, which we reach the next day. It is as if the town has been frozen in time; the traditional homes, made of dark wood with vertical slats across the front, are how you would imagine them hundreds of years ago, covered in tomato vines and chilies and huge cucumbers. Usually crowded with tourists, early in the morning the steep, cobbled street is peaceful, the only noise being the gentle splashing of the watermill. A man outside the small tobacco shop smiles and says “konnichiwa”.

The hamlet of Magome on the Nakasendo trail

The walk along the Nakasendo was filled with moments like this, where time appears to stand still, like bathing in the hot volcanic springs of the onsen in Tsumago that night after a long day’s walk, or watching the sun disappear behind the mountains, a silhouette against the red sky.
On the last day we took a detour from the highway and descended onto Kaida Kogen, a lush green plateau overlooking the sacred –­ and also deathly – Mount Ontake. The active volcano had erupted just weeks before, killing several people. We had lunch with Hideji Ando, a trainmaster, and his wife Mitsuko at their house-turned café, eating delicious miso-flavoured pizza. Hideji took out his Koto, a sort of Japanese guitar, and sang for us while Mitsuko-san played tunes with her double harmonica. All the while Mount Ontake billowed white smoke in the background.

A waterfall along the Nakasendo trail, one of countless natural beauty spots

Walking along the Nakasendo way is like peering into another world, a bucolic paradise unaware of the booming metropolises nearby. There is something wistful about it, as though the world that created the bullet train may someday sweep the rural idyll of the Nakasendo into the 21st century. But for now Hideji and Mitsuko are not going anywhere – they will be there waiting for you with their koto and harmonica in hand.

WHERE TO STAY IN TOKYO

The Conrad Hotel in Tokyo’s futuristic Shiodome district couldn't be more removed from the traditional inns stayed at along the Nakasendo Way. After 11 days of walking, you’ll happily exchange a futon for the springy mattresses in this   sleek and sophisticated luxury hotel. Located between the 28 and 37 floors of one of Shiodome’s soaring skyscrapers, the panoramic views of Tokyo Bay alone make the Conrad Hotel worth booking, particularly from the lobby where you can sit back and listen to nightly jazz sessions.
Share
Tags: NULL