If the US government wasn't in shutdown, we would have just put up a post about the latest inflation data. Sadly, the Bureau of Labour Statistics (BLS) isn't publishing that data, and estimates of price changes in September will have to wait.

But just because the BLS figures aren't on hand doesn't mean that we have no idea of how prices are changing.

Let's ignore some of the wackiest private estimates like Shadowstats (site owner John Williams merely adds an arbitrary constant to all inflation readings since the 1980s), and look to some of the better offerings.

The Billion Prices Project (BPP) is an academic initiative led out of the MIT Sloan School of Management, estimating aggregate inflation in the US using online prices. 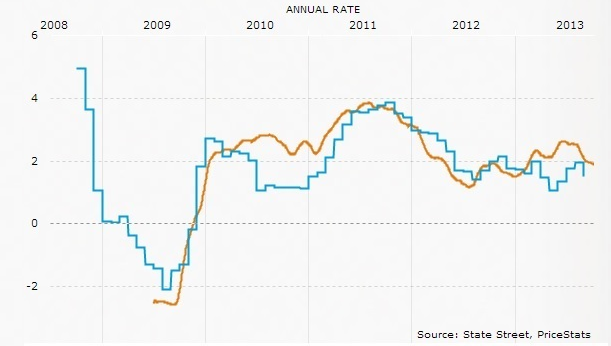 According to the BPP prices haven't risen in September (the period for which we're currently missing an official inflation release).

While the series is intended to anticipate major changes in US inflation trends, it is not supposed to be used to forecast monthly inflation announcements.

In September the US consumer price index fell from 1.6 per cent to 1.5 per cent. Energy was the biggest contributor to softening price pressures.