On June 16, France and Manchester United star Paul Pogba removed a bottle of Heineken from a post-match press conference – following the lead of Cristiano Ronaldo, who did the same thing with a bottle of Coca-Cola. The Juventus forward was (wrongly) accused of tanking Coke’s share price – so how did Pogba’s move affect the Dutch beer brand?

Data from YouGov BrandIndex UK paints a rather mixed picture. While there was an immediate drop in Impression scores (a metric that tracks whether a consumer has a positive or negative overall perception of a brand), which fell from 16.3 to 10.3 (-6) between June 16 and June 27, these scores recovered to 13.0 by the end of the month (June 30). Pogba’s Heineken snub also coincided with a slight rise in Word of Mouth Exposure, which tracks whether people have recently spoken about a brand with their friends or family, from 3.5 to 5.3 (+2.8). 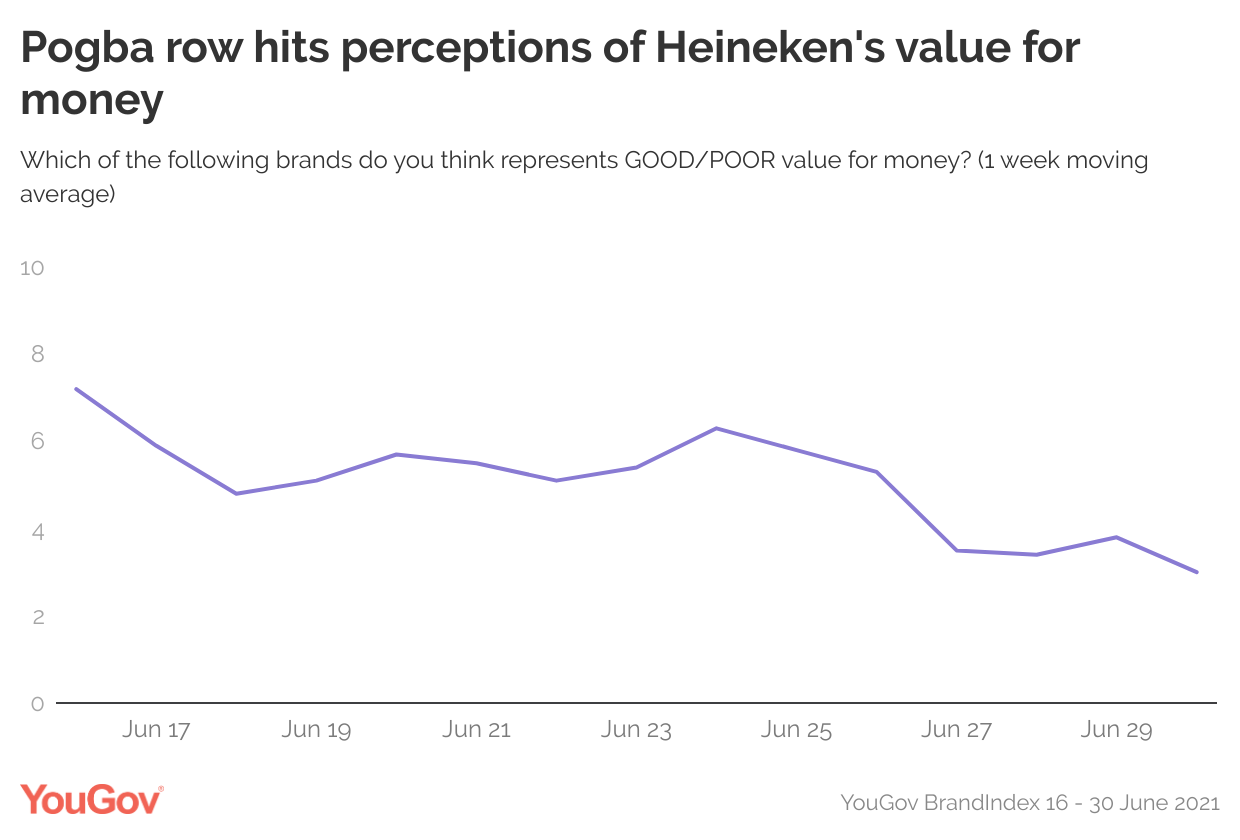 In commercial terms, BrandIndex data shows that Current Customer scores, which measure if consumers have purchased Heineken recently, were roughly static between June 16 and June 30 (3.5 – 3.4). This doesn’t, however, mean that the Pogba affair had no commercial impact on Heineken. Over the same period, Consideration scores declined from 12.6 to 8.0 (-4.6), while Purchase Intent (which asks consumers which brands they’d be most likely to buy next time they’re in the market for an alcoholic drink) saw a slight downturn, falling from 3.5 to 1.7. (-1.8). Perceptions of Heineken’s Value for Money also halved, with scores across this metric going from 7.2 to 3.0 between June 16 – 30.

Most notably, the beermaker’s Reputation scores, which measure whether consumers would be proud or embarrassed to work for a brand, took an immediate hit: while they were sat at 16.8 on June 16, by June 26 they had fallen to 9.4 (-7.4)  – and by June 30 they had only climbed back to 11.5.

Pogba’s intervention didn’t irretrievably tank Heineken’s share price, and it has not (so far) led to mass boycotts, but it has had an effect on how people perceive the brand in some key areas. Most importantly, it shows that sponsors of major events can’t always guarantee that stars will play ball.