John Lewis has been in the news in the past fortnight as it got dragged into the controversy about the refurbishment of Boris Johnson’s Downing Street flat. The renovations to the Prime Minister’s living quarters were allegedly ordered to replace what Tatler described as the “John Lewis furniture nightmare” left by his predecessor. Data from YouGov BrandIndex suggests that the story may have had a real, if short-term, impact on the retailer’s fortunes.

Between April 22 – the day before the story broke – and April 29, the brand’s Quality score (a measure of whether a brand represents good or poor quality to customers) fell from 58.3 to 53.2 (-5.1). Meanwhile, its Value for Money score declined from 18.6 to 13.0 (-5.6), suggesting that the Downing Street story has perhaps (temporarily) altered the brand public perception. 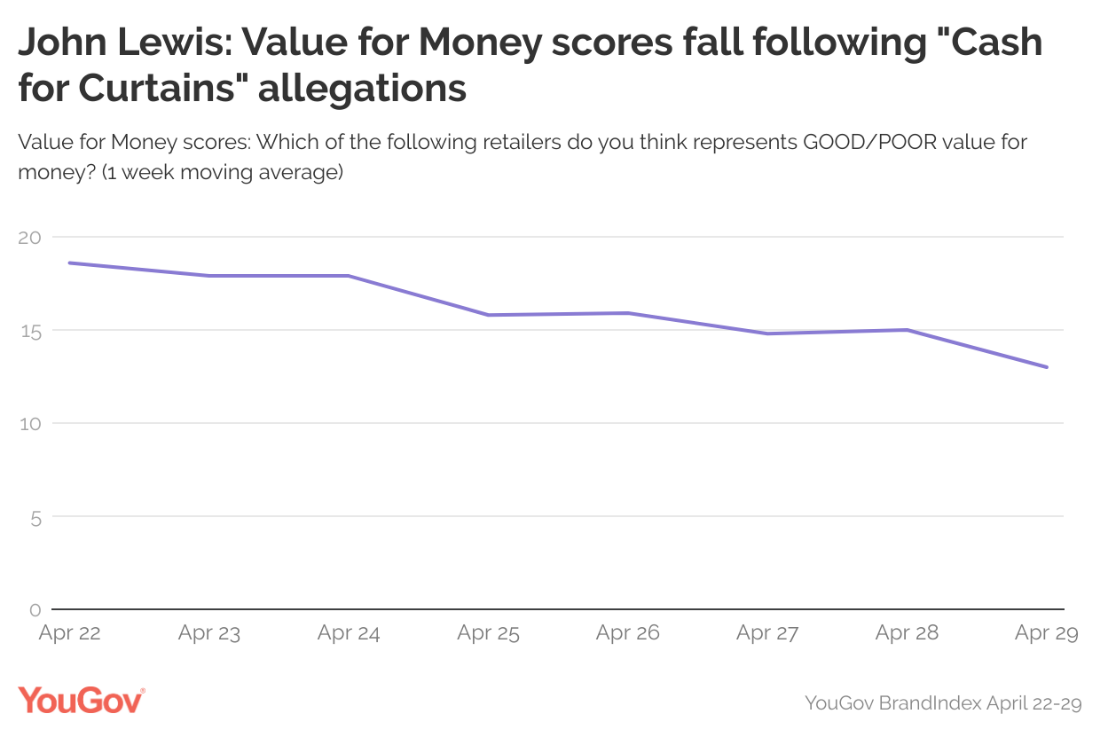 The Prime Minister has dismissed the story and declared his love for the brand. But in the short term, at least, the damage may be done. John Lewis’s Reputation score (which measure whether a consumer would be proud or embarrassed to work for a brand) fell from 45.3 to 37 (-8.3) between April 22 and 29, while Recommend scores saw a decline of 4.2 points (from 37.7 to 33.5). Its overall brand health also appears to have suffered: the Index score, which takes an average of Impression, Quality, Value, Satisfaction, Recommend, and Reputation scores, took a downward turn, falling from 41.3 to 36.5 (-4.8).

For its part, John Lewis has taken ‘Flatgate’ in its stride, and even had some fun at the Prime Minister’s expense. It has also been buoyed by the support of newspaper columnists and (perhaps sensing a PR opportunity) the Leader of the Opposition, who was photographed visiting the store last week.

It remains to be seen what impact – if any – the flat furnishing furore has on John Lewis in the medium and long term. However, it is clear that the nation’s healthiest brand has suffered following its spell as a political football.