Australia was first to enact seatbelt legislation in 1970, creating some unexpected results. It underlines an important point for investors about risk, according to value investing blogger Kevin Murphy.

No matter what anyone may tell you or try to do, attempts to reduce risk in any system – investment or otherwise – only succeed in redistributing it elsewhere.

The analogy we have used before on our Value Perspective Blog, in articles such as On balance, is how, when you squeeze a long balloon in the middle, you only end up putting extra pressure on the two ends.

There is always a balance that must be struck. You might, for example, think compelling motorists to wear seatbelts would make the world a safer place but it turns out that is by no means a given. In Risk by John Adams, we learn that, in the run-up to the relevant legislation finally being passed in the UK in January 1983, pretty much all the evidence seemed to be firmly in favour of wearing seatbelts.

In one parliamentary debate in 1979, for example, the then Transport Secretary argued “on the best available evidence of accidents in this country”, compulsion could save up to 1,000 lives and 10,000 injuries a year. Two years later, the Royal Society for the Prevention of Accidents (RSPA) produced a pamphlet claiming “for belted occupants, the deaths were reduced by 77% in full-frontal crashes and 91% in roll-overs”.

By the time of the UK parliamentary vote, the seatbelt law counted the AA, the British Medical Association, the RAC, the Royal College of Nursing, the Royal College of Surgeons, the RSPA and the Society of Automotive Manufacturers and Traders among its sponsors – causing one member of the House of Lords to observe: “Why, after all, would these institutions seek to mislead the public?”

To which Adams replies: “The answer, it appears, is that they misled themselves. At this time, none of these institutions appeared to be aware of ‘risk compensation’ – the possibility there might be a behavioural response to the compulsory wearing of seatbelts.” All support for the law, he continues, rested on two sorts of evidence – the effect of seatbelts in crashes and the effect of legislation in Australia.

This is because Australia was the first place to enact seatbelt legislation – in the state of Victoria in 1970 and nationwide a year later – yet, Adams points out, it was an unfortunate point of comparison. Road deaths in Australia had risen during the 1960s and supporters of the UK campaign for legislation tended to extrapolate from that and the difference with the present was seen as the number of deaths prevented.

The problem is, things rarely remain constant in any walk of life and, while the accident rate may have been rising around the world in the 1970s, the road-death rate was coming down. And, according to Adams – and as the following chart illustrates – Australia actually saw a smaller decrease in road deaths than a group of four major car-using nations, including the UK and the US, which had at that point not passed any laws. 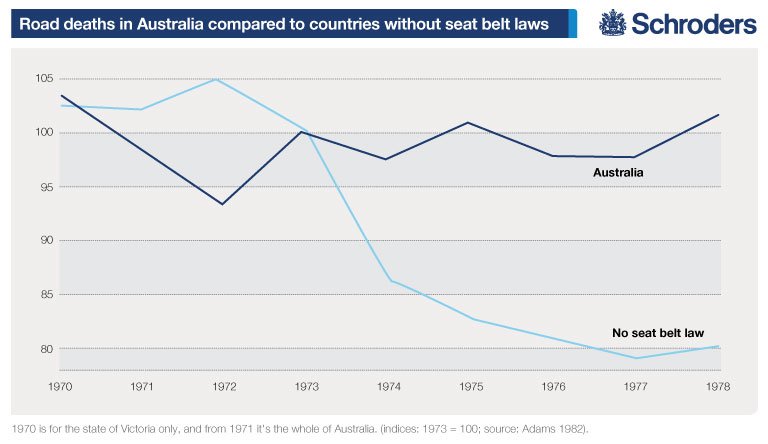 Clearly there were a couple of flawed premises at work in the debate. One was the extrapolation of the future from past data and the other was only considering the risk of death and injury from the point of view of those in the car. Obviously it is true that, if you are wearing a seatbelt as a driver, you will fare better in a full-frontal or roll-over accident.

What is perhaps less obvious, however – though no less true – is that, if you are wearing a seatbelt as a driver, you will feel safer and so may subconsciously drive a little faster or a bit more recklessly, which is bad news for pedestrians, cyclists and other road-users.

According to Adams, for example, in both Australia and eight European countries that introduced seatbelt laws in the early 1970s, injuries to pedestrians subsequently rose.

The legislation did not remove risk from the system – it merely squeezed it down in one part of the balloon and it popped up in another.

The anticipated benefit of the thousands of deaths and injuries prevented over the years never came about – in the UK or anywhere else – because the initial premise of risk reduction was incorrect. As we wrote recently: “Basing decisions on limited information is very human – and very dangerous.”

At this point, it seems relevant to mention the ‘thought experiment’ known as Tullock’s spike, in which US economist Gordon Tullock argued that, if governments were serious about making motorists drive more safely, they should pass legislation that a sharp spike be built into the centre of every car’s steering wheel, as the increased probability of a sticky end in any accident would ensure greater care from the driver.

Whatever the reality in motoring, on The Value Perspective blog, we would certainly agree you tend to act differently if you fully understand the consequences of your actions.

Transposing Tullock’s spike into a portfolio context, we acknowledge there will be plenty of times where we are wrong about an investment, in effect, where we crash.

To protect ourselves from Tullock’s spike, before we invest in any company we think about the consequences of being wrong. Will a failure to meet our expectations be fatal? For it is only by building a portfolio to survive the inevitable crashes, that success can be delivered.

Kevin Murphy is an author on The Value Perspective, a blog about value investing. It is a long-term investing approach which focuses on exploiting swings in stock market sentiment, targeting companies which are valued at less than their true worth and waiting for a correction.