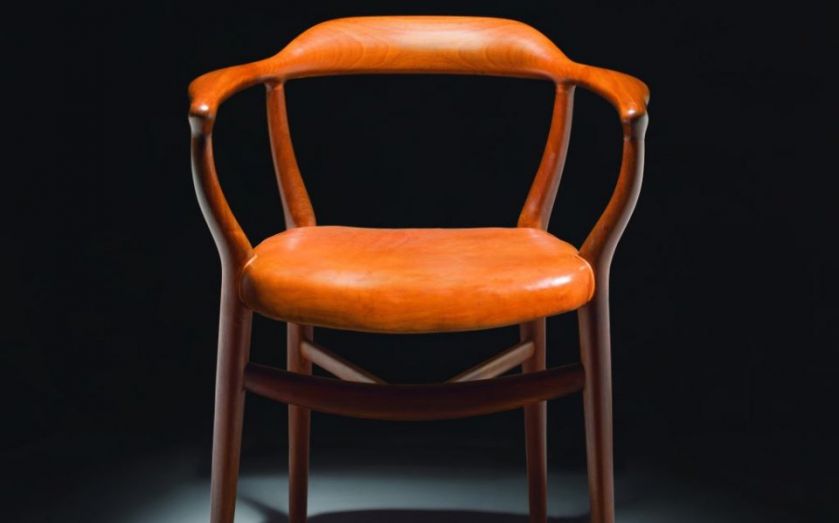 Perhaps it’s because of the cold. In Scandinavia there’s more of an incentive to make the inside of your house look super-stylish because unless you want to get frost bite or, in some parts of northern Norway, eaten by a polar bear, the inside of your house is where you’ll spend the majority of your time. Well, that’s not the whole story, says Scandinavian furniture collector Aldric Speer. “It’s because Scandinavian designers were taught they should always think first about an object’s function. The constraint of making something functional turned out to be liberating: they made something beautiful out of it.”
In the world of interior design “Scandinavian” has come to signify a kind of elegant minimalism: unfussy designs and sumptuous curves. It’s a style heavily indebted to the Bauhaus school, which preached the priority of function over form. As Christina Schmidt, co-founder of furniture boutique Skandium, says, “Why have three glasses for wine, water and milk when you can have one?”

Aldric Speer, collector and curator of the Artcurial auction

The pared down, easy-to-live-with aesthetic, combined with an emphasis on quality craftsmanship, has made furniture from the Nordic region a popular choice for the modern consumer. Recent years have seen a resurgence in interest in classics such as the Drop Chair by Arne Jacobsen, while prices for rare or exemplary pieces continue to break records. Major sellers have reported continuous rises in the totals spent at sales of Scandinavian furniture. At Chicago’s Wright auction house, the most expensive items ever sold – a Paavo Tynell chandelier that went for $85,000 and a pair of $75,000 Finn Juhl lounge chairs – both went last year.
The sweet spot in Scandinavian design is the period between the 1930s and the late 60s. In 1932 Sweden’s Social Democrats came to power promising to clean up the poor living conditions endured by the working classes. They started huge building projects where they introduced bathrooms and double-glazed windows to every house; their mantra, “better everyday living for everyone”, became an ideological touchstone for designers and makers throughout the region. You can’t separate the politics from Scandinavian design, says Schmidt. “It’s about an identity, a people saying ‘this is the way we live, with these standards’ – it’s about pride.”

Pieces from Denmark, Sweden and Finland have always featured prominently in sales of 20th century antiques, but increasingly auctioneers are dedicating entire sales to it. Leading French auctioneer Artcurial recruited Speer to direct its first solely Scandinavian sale taking place in Paris next month.
Speer was an enthusiast before he was an expert: “I have collected Scandinavian design for 18 years. With me, everything is Scandinavian, including my Swedish wife! When I started visiting, I was collecting things by the likes of Verner Panton and other people like him. Then I discovered more and more styles and the rest is history.”

The friends and contacts he made during years as a collector came in useful when preparing for the Artcurial auction. Still it’s a lot of work, traipsing the dealerships and markets of the world, trying to convince buyers to consign their precious antiques to the auction. “It’s a lot of travelling. I go to Scandinavia every six weeks and visit all the markets and antique dealers. It’s a constant process of looking for pieces. Sometimes I even get them from the US or Japan. You never know where the best pieces are because they’re quite old, dotted in collections all over the world.”
His show includes pieces by the likes of Hans Wegner, Otto Schultz and legendary Danish architect and designer Finn Juhl. The latter’s Chieftain chair holds the record for the most expensive piece of Scandinavian furniture ever sold at auction, going for £422,500 after a 20 minute bidding war at Phillips in London in 2012.

The Artcurial auction has seven pieces by Juhl. Speer has even managed to get hold of a Chieftain chair in the most desirable colour, Cognac Leather. He won’t be drawn on whether they’re going to break the record, but he’s excited nonetheless. “Juhl is one of the main focuses of the show,” he says. “We have his Chieftain chair, and another, the bone chair, which is very rare. There are only 12 copies worldwide and there has only been one on sale once in London – it went for £68,000 back in 2007 and back then Scandinavian furniture wasn’t so fashionable.”
It’s in the last couple of years that the market has really changed, says Speer. “Before it was only collectors with a specific interest in design. Now you have a certain group of buyers looking for nice pieces of furniture to have in their homes. That’s why Scandinavian design is so popular: it’s very comfortable, very beautiful to look at, very well made and it has some exclusivity to it.”

Different Scandinavian countries have their different specialisms. “Most of the biggest Scandinavian designers from the 50s and 60s are from Denmark. Swedish Ceramics are very strong compared to Danish. Most of the biggest glasswork artists tend to come from Finland.”
And why does the Scandinavian philosophy make for such beautiful objects? “It’s easy,” says Schmidt. “Simple things are good. They don’t disturb or make noise in space. They are not there to be adored, they don’t overcrowd, they don’t clutter or ponce about. They feel good in their environment – they just are.”
Scandinavian Design – 20 May 2015 at 7pm at Artcurial, 7 Rond-Point des Champs-Élysées, F-75008, Paris; bid online at artcurial.com.
All furniture photographs © Artcurial.
Share
Tags: Bespoke Living