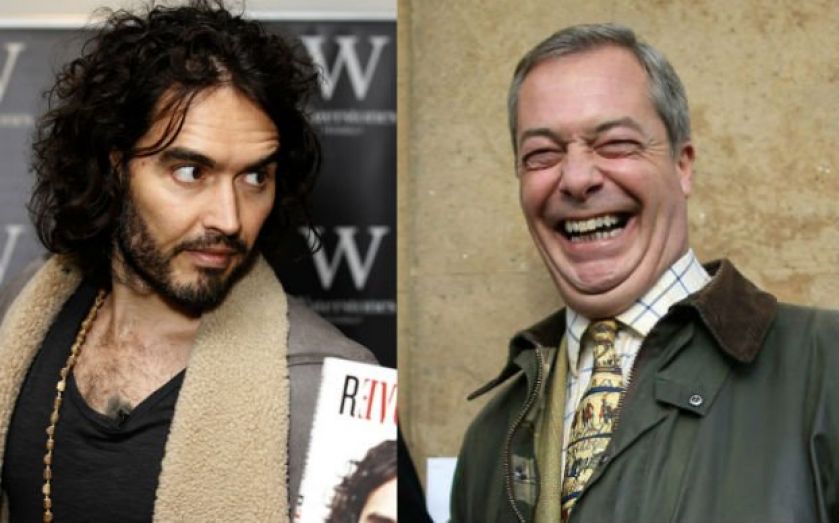 TV viewers of all persuasions will be treated to a political showdown between revolutionary jabberer Russell Brand and immigration delayed Nigel Farage on Question Time tonight.

The must-see event (or must-avoid, depending on how strong your political gag reflex is), kicks of at 10.35pm.

Be prepared for a war of words. But what choice words will they exchange?

We’re pretty confident that breastfeeding will come up (in the corner or under a tablecloth if Farage mentions it of course), with Ladbrokes making it the favourite at 1/4.

Another topic garnering Ukip unwanted attention that could be mentioned is Trumpton, though less likely at 16/1, as is the word traffic at 7/4 after Farage’s sad excuse-making earlier this week.

Brand’s personal history could be surfaced by a panel member, or himself, with odds of 5/1 that heroin addict will be said. A little bit of self-promotion is also on the cards for brand, as the phrase “my new book” comes in at 16/1.

Will it spark more than just a war of words? No odds on one of them walking off or the pair getting into a fight, but there is the City A.M. buzzword bingo to keep you entertained if it doesn’t.

Play along while watching, crossing off the phrases when they’re uttered throughout the show. Hit refresh to get a new set of words to play again if you end up ticking them all off within the first five minutes.

Roll up roll up, for one night only, #BBCQT brings you the Russell Brand and Nigel Farage showdown. In the left corner we have the millionaire working class revolutionary and in the right corner we have the straight-talking pint-drinking Ukip leader. Grab the popcorn and play along with City A.M.’s buzzword bingo…

Click the word or phrase when Brand, Farage or any panel member utters the words.