Is this market losing its marbles?

Road to redemption: Dan Evans is Britain's best bet at Wimbledon after bouncing back from ban 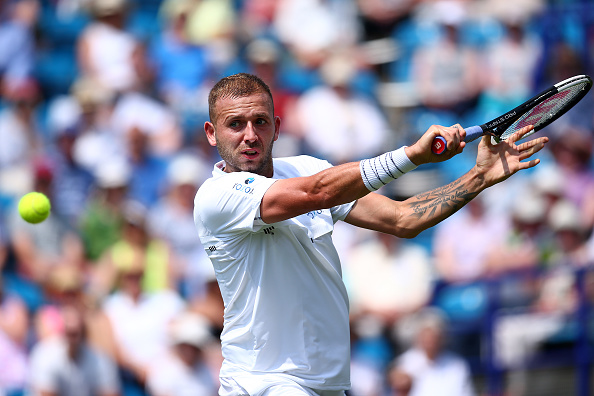 It took Dan Evans having everything taken away from him to realise what he had put at jeopardy.

In the 13 months since returning from a year ban for taking cocaine, he has climbed over 1,000 places in the world rankings to return to the top 100.

In the last month he has excelled on grass, winning Challenger titles at Nottingham and Surbiton and now the World No65 is set to embark on Wimbledon next week as arguably Britain’s best hope in the men’s singles.

Read more: Cameron Norrie: British No2 on his form, Olympic dream and Queen’s and Wimbledon hopes

But he has quickly ascended to the top this time around and is close to his all-time best position of world No41 already.

There has certainly been a change in attitude from Evans in the past year or so, whose washbag was found to be contaminated with cocaine at the Barcelona Open in April 2017.

He has admitted he is now more focused on the sport he loves than ever before, while leaving the partying lifestyle behind. Perhaps the ban was the kick he needed to fulfil his potential.

“I know what I want out of life now,” Evans told the Daily Mail this week. “It’s difficult when you’re younger, I thought I was missing out if I wasn’t going out. Now I know I’m not really missing out and I’d prefer to spend the evening with my girlfriend.”

This new and improved version of Evans is as fit as he has ever been, even if he still enjoys the occasional beer, but he also has a new coach that has helped lift his game to a new level.

David Felgate, the former coach of Tim Henman, has been on hand to help reform the Birmingham player over the past year and not only return his game to its best, but improve it further, including key aspects such as his serve and volley.

This year he has even trained with Roger Federer, who invited him out to Switzerland in April following the pair’s close encounter in January’s Australian Open second round.

His performances earned him a wildcard for Queens, although he lost in the first round of the Fever-Tree Championships after being pitted against three-time Grand Slam winner Stan Wawrinka.

With Wimbledon on the horizon, this week he has continued his preparation at Eastbourne’s Nature Valley International, and today he progressed through to the quarter-finals after beating Pierre-Hugues Herbert – set to be Andy Murray’s doubles partner at Wimbledon – 6-3, 7-5.

He will face the winner of Kyle Edmund or Cameron Norrie in the quarter-finals.

The 29-year-old may only be Britain’s No3, but on current form he is the country’s best male player. The ATP rankings have him placed at 38th this year in the Race to London, while Cameron Norrie is 50th and British No1 Kyle Edmund is 79th.

With Murray set to continue his rehabilitation following major hip surgery by competing in the doubles at SW19, Evans could well be Britain’s best bet in the men’s singles.

Huawei expects revenue to drop by billions amid US ban