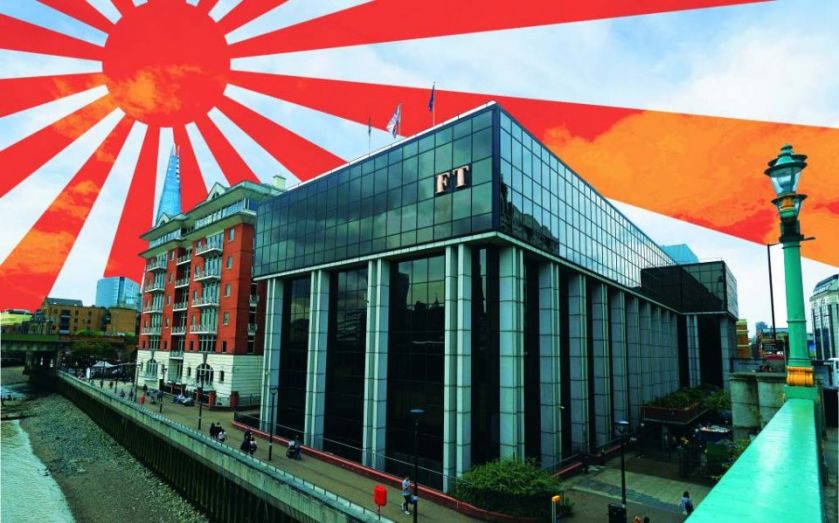 Japanese firms are casting their nets far and wide as deals activity heats up, with media giant Nikkei’s £844m swoop for the Financial Times yesterday taking the country’s outbound M&A to an all-time high in 2015.
Companies from Japan have splash­ed nearly $53bn (£34bn) on for­eign takeovers so far this year, putting them on the map as a major new force in global M&A.
The recent surge in outbound deals is possibly best exemplified by Tokio Marine Holdings’ $7.5bn bid for US-based HCC Insurance, announced last month – the transaction stands as the 10th biggest outbound Japanese acquisition on record.
Kevin Morris, a partner at PwC, told City A.M. yesterday that big Japanese firms “are being encouraged to buy outside of Japan, because there’s basically nothing left to buy in Japan.”
Some analysts pointed to a mixture of Abenomics – the policy espoused by Prime Minister Shinzo Abe based on “three arrows” of fiscal stimulus, quantitative easing and structural reforms – and a glut of balance sheet cash as the main driving forces behind this year’s uptick in M&A.
Read more: The sun shines on Japan as investors turn to the East
Loose monetary policy in Japan has played a part in promoting more deals, Morris added: “He [Shinzo Abe] is certainly encouraging much greater activity and economically they are certainly moving forward.”
Following Nikkei’s purchase of the FT, Japanese acquisitions of UK firms will total over $3bn in 2015 so far,  according to Dealogic data. That is the second highest January-to-July figure in recent years. While Abe’s methods are questioned by some economists, the future looks bright for Japanese dealmakers. Morris said he is currently “working on three or four deals connected with Japan”.
Recent years have seen Japan-UK mega-deals such as the £3.2bn Dentsu-Aegis merger, and Suntory buying Lucozade and Ribena for £1.35bn.
Nikkei’s acquisition, revealed yesterday, includes the famous pink paper and website FT.com.
The £844m deal will also see Pearson transfer FT Chinese, a web design business called FT Labs, and Financial Publishing, which includes publications such as The Banker and Investors Chronicle.
Not included in the deal is Pearson’s 50 per cent stake in the Economist Group, or the headquarters of the newspaper near Southwark Bridge. Nikkei will make a contribution to Pearson’s pension fund of around £90m.
“Pearson has been a proud proprietor of the FT for nearly 60 years. But we’ve reached an inflection point in media, driven by the explosive growth of mobile and social. In this new environment, the best way to ensure the FT’s journalistic and commercial success is for it to be part of a global, digital news company,” said Pearson chief John Fallon yesterday.
German publisher Axel Springer had been the frontrunner in the talks, but was beaten to the deal by Nikkei.
Evercore, Goldman Sachs, JP Morgan Cazenove, and Freshfields advised Pearson on the deal, while Rothschild advised Nikkei.
Shares in London-listed Pearson closed 2.07 per cent higher at 1,234p yesterday.
Share
Tags: Abenomics Company Mergers and acquisitions Pearson