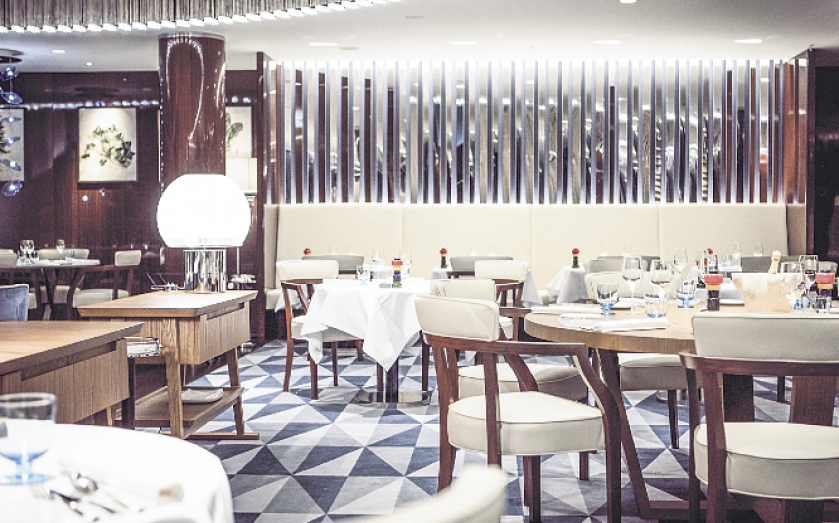 If you’ve not been to the Bulgari Hotel in Knightsbridge – and unless you’re an oligarch there’s no reason you would have been – you probably have the same preconceptions about it as me. It brings to mind a certain type of wealth: one where the lines between class and crass are fine, what the kids would call bling and your grandmother might describe as “all fur coat and nae knickers” (somehow this is meant as a pejorative).

If you were to conjure a mental image, there would probably be a couple of McLaren F1s with personalised registration plates parked outside. And the restaurant: that would be a formal, fiddly affair – the kind of place that garnishes its caviar with gold leaf and diamond shavings and the souls of virgins.

Well, you’d be partly right; when I went on Monday evening, there was indeed a McLaren F1 parked outside (registration plate “555”) but the restaurant was a big surprise. Alain Ducasse has taken over the newly-christened Rivea, the previous iteration, Robbie Pepin’s Il Ristorante, having lasted less than two years. Ducasse is a culinary juggernaut with more than 20 restaurants to his name and almost as many Michelin stars. He’s best known on these shores for his eponymous venture at The Dorchester, which is the very definition of formal dining. And as you walk down Rivea’s sweeping staircase into a basement composed entirely of polished things – wood, glass, steel, human beings – it looks like you’re about to get more of the same. It has the obligatory cream banquettes and a massive table decorated with bread and vegetables, presumably used for serving continental breakfast to hotel guests in the mornings (this, along with the group of American businessmen who bellowed into their phones throughout their meal made sure I never forgot I was in a hotel).

But then you start to notice the little details. The staff wear cardigans and Converse sneakers, Nick Cave breaks up the jazzy muzak and the menu is sparkly and looks like something you might buy from Clinton Cards. And then there’s the food, which is the antithesis of gauche – it’s an exercise in restraint: simple, unfaffy, as if Ducasse has gone out of his way to make Rivea the exact opposite of the restaurant you expect it to be.

At first glance, the menu looks suspiciously cheap, until you realise you’re expected to order half of the items on it. On the recommendation of our waitress we each went for two starters, a pasta dish, a main, some cheese and a dessert, as well as crudites – at least 11 plates between us. The cooking takes inspiration from the Riviera – in case you hadn’t gleaned that from the name – with a heavy contingent of pasta and seafood dishes.

First up (the dishes arrive in the order the chef finishes them, as is de rigueur these days) was a pair of tomatoes stuffed with tomato marmalade and olive, only distinguishable from ones you might make yourself (on a very, very good day) by the dainty little deep-fried flower perched atop them. Aubergine caviar – the only “caviar” on the menu – was only slightly fancier, with crispy slivers of aubergine sitting in a subtle, zesty paste. Sea bream served ceviche-style with grapefruit and mandarin was more of the same: simple but impeccably executed.

A tiny plate of fresh pappardelle with tomato, blanched almonds and mushrooms was proper, hearty Italian cooking but was left in the shade by the artichoke and borage ravioli, which was outstanding – rich and buttery and incredibly moreish.

The mains – “Rivea plates” – are rather small, too. Duck in a honey jus was perfectly cooked and served with slices of turnip that tasted better than turnip has any right to. El Pye’s shelled blue lobster tail with artichoke was an excellent little dish (again, emphasis on the little) but struggled to justify its hefty price tag (£23).

I rounded it off with a very nice bowl of rhubarb and strawberries with almond ice cream which, like everything else on the menu, was relentlessly light and summery – the kind of food that should really be eaten by the sea in Portofino rather than in a basement in Knightsbridge.

Sounds good, right? Yet I can’t shake the nagging feeling that if my McLaren were parked outside, I’d want more. More extravagance, more opulence, a more explicit reflection of the size of my wallet. I’d want to see showmanship, things stacked on top of other things, and things that are on fire, or frozen, or both. What you get is an unshakeable confidence in the ingredients to get the job done. It’s calm and assured, the type of food that those of us who hang about at farmers’ markets at weekends go crazy for. But do those people really visit the Bulgari hotel? Or even set foot in Knightsbridge? In short, Rivea is the right restaurant, but I’m not convinced it’s in the right place.