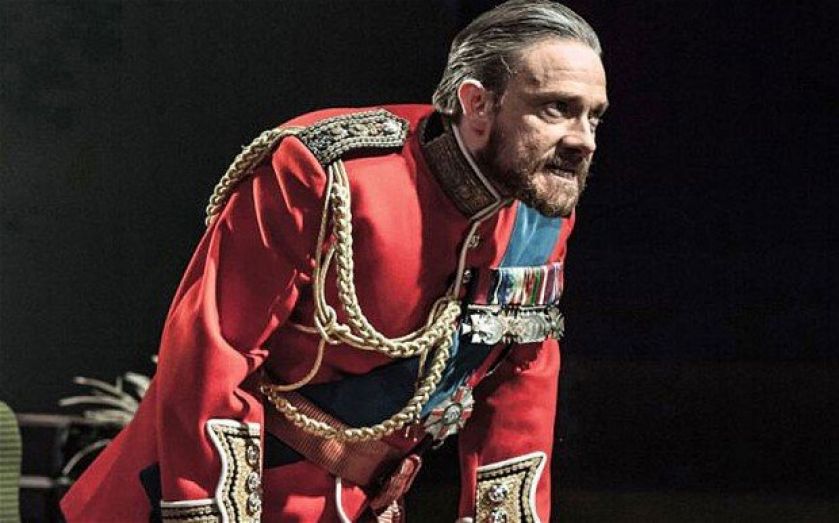 In Jamie Lloyd’s Richard III, now is, quite literally, the Winter of Discontent. It’s set directly after the political turmoil of 1978-9, in a world where the military seem to have taken charge.

It’s a neat one liner, but somewhat confusing in terms of plotting. For instance, it isn’t immediately clear why a bolshie Geordie in a baby blue disco suit is mouthing off at a room full of military leaders whose uniforms are more evocative of the first world war than the 70s.

Once you settle in to it, though, Lloyd’s production is a breeze. It has a lightness of touch that refuses to be weighed down by the regular outbursts of graphic violence.

Hobbit and The Office star Martin Freeman – whose fans have drawn tuts from theatre aficionados who disapprove of laughing or applauding or having fun unless it’s at a point clearly signposted by something clever in the original text – gives us a Richard who is more cunning than psychotic. He allows the evil to trickle out, rather than burst forth, and what his interpretation lacks in visceral impact it makes up for in sheer watchability.

Iambic pentameter plays second fiddle to comic timing, and famous lines are delivered with more sarcasm than venom or despair. His  famous: “A horse? A horse? My kingdom for a horse?” becomes an knowing final joke from a man who’s already accepted his number is up.

This is the joy of Richard III, one of the most versatile villains in the Shakespeare canon – he can be unpredictable and psychotic, dangerous and sensual, or, as we find in this case, sarcastic and very funny.