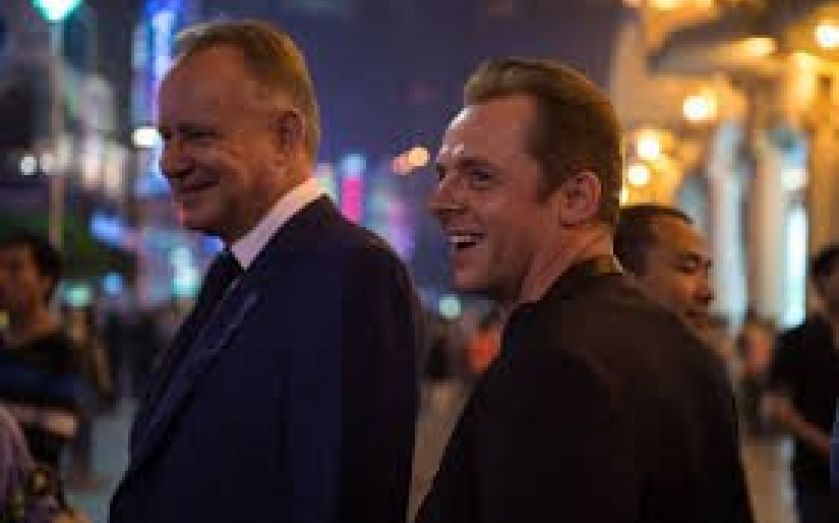 You’d think a psychiatrist would understand why people are unhappy. As it happens, Hector (played by ubiquitous everyman Simon Pegg) doesn’t even know why he’s unhappy. He lives a seemingly comfortable life with his beautiful and successful (but stubbornly childless, we’re reminded) girlfriend Clara in London. But he feels like a fraud imparting worldly advice for a living when he knows nothing of the world. So Hector treads the well-worn path of many a troubled Western soul and books a flight to the Far East and then Africa, armed with two gifts from Clara; a journal and permission to sleep with other women.
Aesthetically speaking, it’s like The Secret Life of Walter Mitty directed by a Jean-Pierre Jeunet fan. Sketches wiggle on the page, cardboard planes dance in the sky and life lessons scrawl themselves across the screen, just in case we missed an obvious slice of wisdom like “Making comparisons can spoil your happiness.” Through its surrealist distractions, the film tries hard to maintain the buoyant optimism that Walter Mitty carried off so well, but it just fails to connect emotionally.
Perhaps it’s harder to wear your heart on your sleeve when you’re British.
Pegg is likeable and convincing as Hector and Rosamund Pike’s turn as Clara is endearing, despite some awful dialogue and a lot of screen time via Skype. The film boasts an impressive supporting cast, including Stellan Skarsgard playing a Swedish millionaire in China, Christopher Plummer as an eccentric professor of happiness and Toni Collette, sorely underused here, as Hector’s old flame for all of 10 minutes.
Though it’s perfectly pleasant, there are no burning truths and no surprises; will Hector continue collecting pearls of wisdom from around the world, or will he realise that his life’s OK, really, and start a family with Clara? Well, what do you think?
★★★☆☆