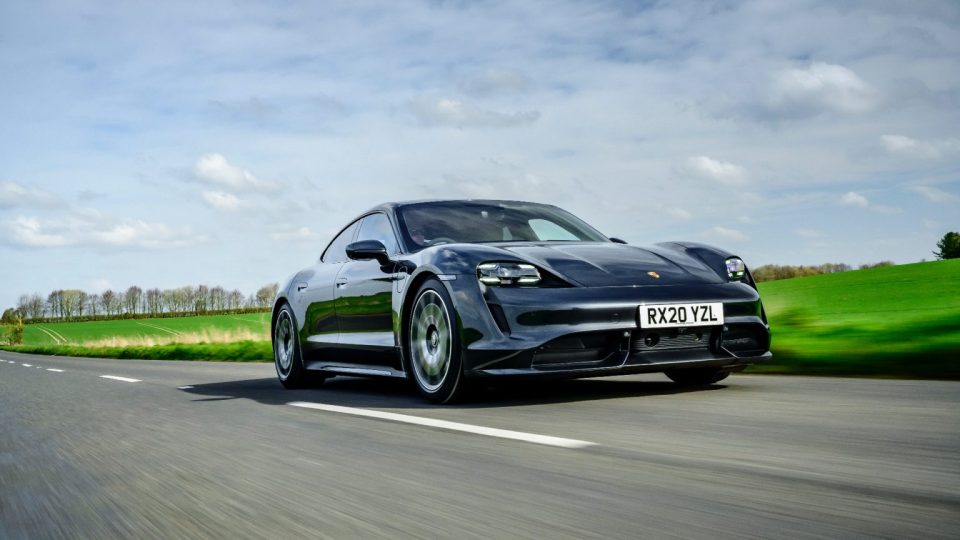 Tesla launched its Model S way back in 2012, but the establishment still hasn’t caught up. At least, not literally. Select Ludicrous Mode and the flagship Model S Performance will rocket to 62mph in 2.6 seconds. Swap into the new, all-electric Porsche Taycan Turbo S, dial up Launch Control, and you’ll need an extra 0.2sec for the same party-trick.

Case closed, then? Not quite. Straight-line speed is all very well, but the Taycan (say it ‘Tie-can’) is the first EV I’ve driven that doesn’t underwhelm the moment you turn a corner.

Despite weighing as much as a Range Rover, it still steers, stops and stimulates like a Porsche. The Model S will be first past the post, but in terms of emotional appeal – something you can’t measure with a stopwatch – it finishes a distant second.

My test car was the middle-ranking Taycan Turbo, which packs a 93.4 kWh battery, two electric motors and four-wheel drive. Total output is 625hp, or 680hp for short periods on overboost.

With no gears to shift and a muted whoosh from the e-motors, the experience is oddly serene. Like the Millenium Falcon making the leap to light speed, it doesn’t so much accelerate as teleport from one location to the next.

The bits in-between are fun, too. On roads where a Tesla would seem stodgy and aloof, the Porsche feels agile and immersive. Switch into Sport+ mode and the whole car tenses, three-chamber air suspension and a low centre of gravity banishing even a hint of body-roll. Its steering is superb and the carbide-coated brakes feel mighty.

And while I initially missed the hard-rock howl of a Porsche flat-six, I soon grew to like its subtle electro soundtrack.

The Taycan also appeals in other ways. It looks impossibly sleek and futuristic: a concept car for the road. And its cabin feels special, with typically Teutonic quality and three crisp touchscreens dominating the dashboard. Spec four-zone climate control and even the rear passengers get one. You feel cocooned by the high centre console, but there’s ample room for four adults, plus a moderately sized boot at both ends.

If you need more space, wait for the SUV-styled Taycan Cross Turismo – due in 2021.

If the Taycan has an Achilles’ heel, it relates to charging. Its 800-volt power supply is twice that of most electric cars, and can charge at up to 270kW. In practical terms, that means going from five to 80 percent full in 20 minutes.

However, the Ionity network – a joint project between Mercedes-Benz, Ford, BMW and Porsche’s parent Volkswagen Group – only offers a handful of suitable ultra-rapid chargers at present. Four hundred are planned for major roads across Europe, but that still pales in comparison to Tesla’s near-2,000 Supercharger stations.

If you love driving, this is the best EV you can buy. That sounds like damning with faint praise, but don’t underestimate what an electrifying car (sorry) the Taycan is. If I had a driveway – and thus could charge at home – I’d choose one over a Panamera, or indeed any Porsche SUV. Suddenly, the future looks a bit brighter.