Brexit, Trump and European elections all had the potential to cause chaos in the stockmarket. Yet investors have remained calm. What next?

How markets have responded to elections

When global equities fell 7% in the days following the UK’s European Union (EU) referendum, it appeared that the tone for markets may have been set for the next year ahead. A number of elections in Europe and the US were supposed to have the potential to turn politics – and markets – upside down.

But that was as bad as it got.

While global shares fell 2.9% in the wake of Donald Trump’s surprise win in the US presidential election in November, the stockmarket’s trajectory could not be deflected from its upward path. 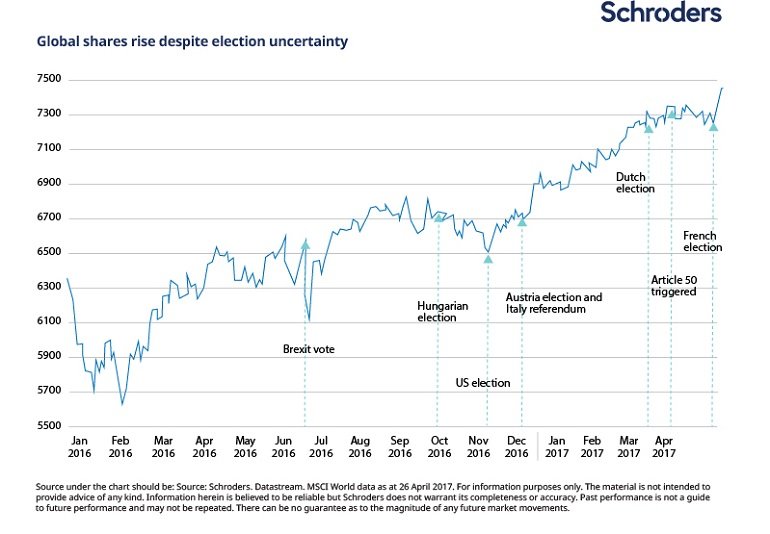 Why has the stockmarket continued to rise?

Investors’ pursuit of income in a low interest rate environment has been a major contributing factor.

Interest rates in most of the developed world remain at or near record lows, at 0.25% in the UK and 0.75% in the US. Investors have therefore turned to shares, which can pay dividends. The FTSE 100 currently yields 3.7% and the S&P 500 offers 2%. This is particularly attractive to certain income-hungry investors, such as those in retirement.

There are elections on the horizon which still have the potential to shock the market.

Below is a list of the votes and events that have passed and those that are still to come. Schroders Economics Group has detailed the risk posed by each, the probability of it happening and the potential market impact. 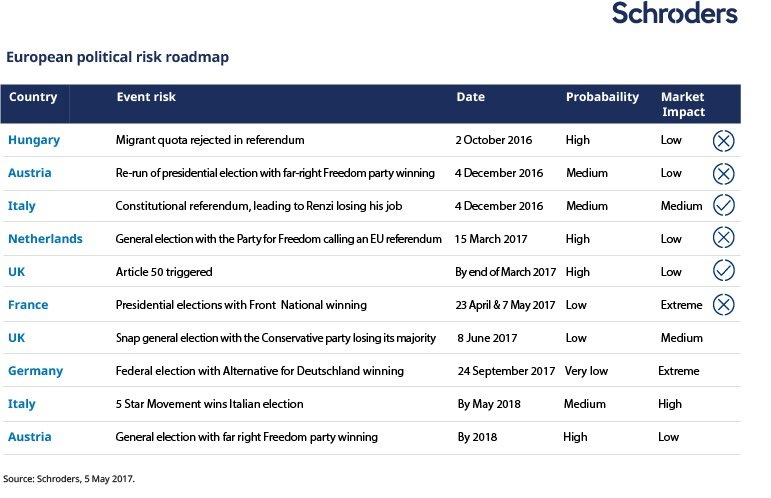 The UK general election on 8 June and German elections on 29 September are the next known major political events on the horizon.

But Azad Zangana, Senior European Economist & Strategist at Schroders, does not expect either to cause many issues for investors. He sees Italy’s election due around May 2018 as the next major political risk.

“The UK’s general election is very unlikely to yield anything other than a stronger Conservative government.

“German elections follow, but we see these as low risk. Angela Merkel may lose but this would only be to her current junior coalition partners, which would not be a concern for investors.

“A bigger risk to Europe’s stability is Italy where elections are due by May next year. The anti-establishment Five Star Movement still leads the polls.

“There is a lack of clarity around the Five Star Movement’s (M5S) policies and that could be a de-stabilising factor for Europe and the financial markets.”

“If M5S hold on to their lead and eventually win, we are likely to see the euro weaken, Italian equities to underperform, and potentially a debt crisis further down the road. The European Central Bank will try to maintain calm in markets with quantitative easing, but this cannot last forever.”

View from a global fund manager

Alex Tedder, Head of Global Equities at Schroders, said: “The result of the French election was an important “risk-clearing” event, given the huge ramifications it carried for eurozone stability. The result provides a more positive outlook for Europe and the euro.

“UK markets responded very positively to the French election outcome too, but we are more cautious on UK stocks more broadly. The country’s consumption-driven economy faces pressures from a weak pound, rising inflation and falling real incomes and we think the market, in particular small and mid-cap companies, could start to struggle.

“In the US, although uncertainty surrounds the Trump administration, the Federal Reserve’s tightening of monetary policy looks gradual and the overall economy remains strong.

“Several major events remain for 2017. The UK, Germany and Italy all face elections, and these could still cause the market to wobble. But short-term market setbacks can prove very helpful for more patient investors looking to generate returns.

“In the lead-up to the French election, global equities were growing less influenced by political and economic events. Investors appeared to be refocusing their attention on the quality of companies and their earnings. Stock correlations – the degree to which stocks move in the same direction – have fallen.

“All in all, signs have been emerging to indicate an improving environment for stock picking. Over the long term, we still feel that this is a bigger determinant of investor returns than trying to respond to political events.”